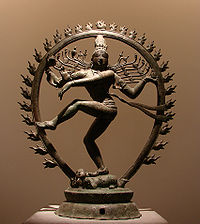 Saiva siddhānta,[1][2] Considered normative tantric Shaivism, provides the normative rites, cosmology and theological categories of tantric Shaivism.[3] Being a dualistic philosophy, the goal of Shaiva Siddhanta is to become an ontologically distinct Shiva through Shiva's grace.[4]

This tradition was once practiced all over India. However the Muslim subjugation of North India restricted Shaiva Siddhanta to the south,[5] where it merged with the Tamil Saiva movement expressed in the bhakti poetry of the Nayanars.[6] It is in this historical context that Shaiva Siddhanta is commonly considered a "southern" tradition, one that is still very much alive.[6] The Tamil compendium of devotional songs known as Tirumurai, the Shaiva Agamas and "Meykanda" or "Siddhanta" Shastras,[7] form the scriptural canon of Tamil Shaiva Siddhanta.

Shaiva Siddhanta encompasses tens of millions of adherents, predominantly in Tamil Nadu and Sri Lanka. Today it has thousands of active temples there and a number of monastic and ascetic traditions, along with its own community of priests, the Adisaivas, who are qualified to perform Shaiva Siddhantin temple rituals.

The name of the school could be translated as "the settled view (siddhānta) of Shaiva doctrine" or "perfected Shaivism." There are of course many other Shaiva doctrines, and so it may seem odd that this particular one should have been known by a name that makes such a large claim, but widespread epigraphical and literary evidence suggests that this is because it simply was the dominant school of Shaiva liturgy and theology for a long period and across a wide area. Early works of the school do not appear to use the label Śaivasiddhānta:[8] one of the earliest datable attestations of the label is probably that in the eighth-century Sanskrit inscription carved around the central shrine in the Kailasanatha temple in Kancheepuram.

Saiva Siddhanta's original form is uncertain. Some hold that it originated as a monistic doctrine, espoused by Tirumular (date unknown). It seems likely to others, however, that the early Śaiva Siddhānta may have developed somewhere in Northern India, as a religion built around the notion of a ritual initiation that conferred liberation. Such a notion of liberatory initiation appears to have been borrowed from a Pashupata (pāśupata) tradition.[9] At the time of the early development of the theology of the school, the question of monism or dualism, which became so central to later theological debates, had not yet emerged as an important issue.

From the fifth to the eighth CE Buddhism and Jainism had spread in Tamil Nadu before a forceful Shaiva bhakti movement arose. Between the seventh and ninth centuries, pilgrim saints such as Sambandar, Appar and Sundarar used songs of Shiva’s greatness to refute concepts of Buddhism and Jainism. Manikkavacakar's heart-melting verses, called Tiruvacakam, are full of visionary experience, divine love and urgent striving for truth. The songs of these four saints are part of the compendium known as Tirumurai which, along with the Vedas, Shaiva Agamas, and the Meykanda Shastras, are now considered to form the scriptural basis of the Śaiva Siddhānta in Tamil Nadu. It seems probable that the Tirumurai devotional literature was not, however, considered to belong to the Śaiva Siddhānta canon at the time when it was first composed:[10] the hymns themselves appear to make no such claim for themselves.

The Bhakti movement should not be exaggerated as an articulation of a 'class struggle', there is nevertheless a strong sense against rigis structures in the society.[11]

In the twelfth century Aghorasiva, the head of a branch monastery of the Amardaka order in Chidambaram, took up the task of amalgamating Sanskrit and Tamil Siddhanta. Strongly refuting monist interpretations of Siddhanta, Aghorasiva brought a change in the understanding of Siva by reclassifying the first five principles, or tattvas (Nada, Bindu, Sadasiva, Isvara and Suddhavidya), into the category of pasa (bonds), stating they were effects of a cause and inherently unconscious substances, a departure from the traditional teaching in which these five were part of the divine nature of God.

Aghorasiva was successful in preserving the Sanskrit rituals of the ancient Āgamic tradition. To this day, Aghorasiva’s Siddhanta philosophy is followed by almost all of the hereditary temple priests (Sivacharya), and his texts on the Āgamas have become the standard puja manuals. His Kriyakramadyotika is a vast work covering nearly all aspects of Shaiva Siddhanta ritual, including the daily worship of Siva, occasional rituals, initiation rites, funerary rites, and festivals.

In Tamil Shaiva Siddhanta, the thirteenth century Meykandar, Arulnandi Sivacharya, and Umapati Sivacharya further spread Tamil Shaiva Siddhanta. Meykandar's twelve-verse Śivajñānabodham and subsequent works by other writers, all supposedly of the thirteenth and fourteenth centuries, laid the foundation of the Meykandar Sampradaya (lineage), which propounds a pluralistic realism wherein God, souls and world are coexistent and without beginning. Siva is an efficient but not material cause. They view the soul’s merging in Siva as salt in water, an eternal oneness that is also twoness.

Saiva Siddhanta today is practiced widely among the Hindus of southern India and Sri Lanka. It is also prevalent among Hindus of the Tamil diaspora around the world.

Prominent Siddhanta societies, temples and monasteries also exist in a number of other countries. The United States island of Kauai, a part of Hawaii, is home to the Saiva Siddhanta Church, an organization that promotes the union of worldwide Hindus, through a publication called Hinduism Today. This was founded by Satguru Sivaya Subramuniyaswami (1927–2001), which is currently under the auspices of Subramuniyaswami's designated successor, Satguru Bodhinatha Veylanswami (1942- ). This lineage, which traces itself back to the Saiva Siddhars of Northern Sri Lanka, adheres to the philosophical position that the original Saiva Siddhanta as expounded by Tirumular, was and is monistic, and propagates this teaching as Advaita Saiva Siddhanta. The famous songs of the Sri Lankan Saiva Sage, Siva Yogaswami, attest to this view of the nature of God, Soul and World as being ultimately one.

The texts revered by the southern Shaiva Siddhanta are the Vedas; the twenty-eight dualist Hindu Agamas, which form the ritual basis of the tradition; the twelve books of the Tamil Saiva canon called the Tirumurai, which contains the poetry of the Nayanars; and the Saiva Siddhanta Shastras.[12]

Siddhas such as Sadyojyoti (ca seventh century[13]) are credited with the systematization of the Siddhanta theology in Sanskrit. Sadyojyoti, initiated by the guru Ugrajyoti, propounded the Siddhanta philosophical views as found in the Rauravatantra and Svāyambhuvasūtrasaṅgraha. He may or may not have been from Kashmir, but the next thinkers whose works survive were those of a Kashmirian lineage active in the tenth century: Rāmakaṇṭha I, Vidyākaṇṭha I, Śrīkaṇṭha, Nārāyaṇakaṇṭha, Rāmakaṇṭha II, Vidyākaṇṭha II. Treatises by the last four of these survive. King Bhoja of Gujarat (ca 1018) condensed the massive body of Siddhanta scriptural texts into one concise metaphysical treatise called the Tattvaprakāśa.

The culmination of a long period of systematisation of its theology appears to have taken place in Kashmir in the tenth century, the exegetical works of the Kashmirian authors Bhatta Narayanakantha and Bhatta Ramakantha being the most sophisticated expressions of this school of thought.[14] Their works were quoted and emulated in the works of twelfth-century South Indian authors, such as Aghorasiva and Trilocanasiva.[15] The theology they expound is based on a canon of Tantric scriptures called Siddhantatantras or Shaiva Agamas. This canon is traditionally held to contain twenty-eight scriptures, but the lists vary,[16] and several doctrinally significant scriptures, such as the Mrgendra,[17] are not listed. In the systematisation of the ritual of the Shaiva Siddhanta, the Kashmirian thinkers appear to have exercised less influence: the treatise that had the greatest impact on Shaiva ritual, and indeed on ritual outside the Shaiva sectarian domain, for we find traces of it in such works as the Agnipurana, is a ritual manual composed in North India in the late eleventh century by a certain Somasambhu.[18]

Three monastic orders were instrumental in Shaiva Siddhanta’s diffusion through India; the Amardaka order, identified with one of Shaivism’s holiest cities, Ujjain, the Mattamayura order, in the capital of the Chalukya dynasty near the Karnataka, and the Madhumateya order of Central India. Each developed numerous sub-orders. (see Nandinatha Sampradaya) Siddhanta monastics used the influence of royal patrons to propagate the teachings in neighboring kingdoms, particularly in South India. From Mattamayura, they established monasteries in regions now in Maharashtra, Karnataka, Andhra and Kerala.