Shakespeare in the Park (or Free Shakespeare in the Park) is a theatrical program that stages productions of Shakespearean plays at an open theater in New York City's Central Park. The theater and the productions are managed by the Public Theater and tickets are distributed free of charge on the day of the performance. Originally branded as the New York Shakespeare Festival under the direction of Joseph Papp, the institution was renamed in 2002 as part of a larger reorganization by the Public Theater.[1]

The festival was originally conceived by director-producer Joseph Papp in 1954. Papp began with a series of Shakespeare workshops, then moved on to free productions on the Lower East Side. Eventually, the plays moved to a lawn in front of Turtle Pond in Central Park. In 1959, parks commissioner Robert Moses demanded that Papp and his company charge a fee for the performances to cover the cost of "grass erosion." A court battle ensued. Papp continued to fight Moses, winning his enduring respect and the quote "well, let's build the bastard a theater." Following this, Moses requested funds from the city for the construction of an amphitheater in the park. In 1961, the Delacorte Theater was built. The first performance held in the theater in 1962 was Shakespeare's The Merchant of Venice, starring George C. Scott and James Earl Jones.[citation needed]

The Delacorte Theater is an open-air amphitheater located on the southwest corner of the Great Lawn in Central Park, closest to the entrance at 81st Street and Central Park West. It was built in 1961 and named for George T. Delacorte, Jr., who donated money for its creation. Belvedere Castle and Turtle Pond provide a backdrop for the shows at the Delacorte. As shows at the Delacorte begin in the early evening, shows usually start in daylight; as the play rolls on, the sun sets and the audience is drawn into the illuminated action on the stage. Since 1962 the Public has had the privilege of its exclusive use. 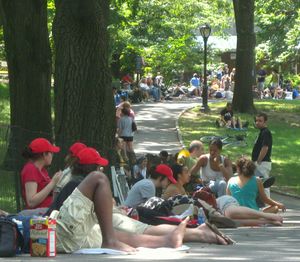 Tickets to Shakespeare in the Park are free and can only be obtained the day of a performance. At 12 noon tickets are distributed, two per person, at the Delacorte to the line of people that usually springs up early in the morning when the park opens at 6 a.m. Anyone five years old and older can obtain and are required to have a ticket should they wish to see the show. The 2013 Season features a new policy that one person can only obtain two tickets for two performances of one production. In addition to the main line which snakes through the park the Public also offers a few other options to get tickets. One being the line for Seniors which begins at the benches closest to the theater's box office. The tickets provided to that line have easy access inside the theater and are only available to persons 65 and above. ID is required to obtain the tickets. The ADA Accessible line is intended for patrons with disabilities and can by joined by checking in with staff at the box office the morning of a performance who will provide, as availability dictates, tickets in locations suited to various individual needs. Shakespeare in the Park also offers specific performances throughout the summer for patrons with hearing and/or vision loss including Sign Language interpreted performances, audio-described performances, and open-captioned performances.

In 2009 the Public introduced the Virtual Ticketing system which is an online drawing to win tickets to that days performance without waiting in line in person. On the day of a show, users can log on to shakespeareinthepark.org anytime between midnight and 11:59 a.m. to register for that evening’s performance. After 12:00 p.m. that same day, users will receive an e-mail stating if they have received tickets to the show or not. Tickets can be claimed at the Delacorte box office between 5:00 p.m. and 7:00 p.m. under the name and address used for registration. A valid photo ID is required for all pick-ups at the Box Office. Any tickets not claimed by 7:00 p.m. will be given away to the stand-by line. Within the Virtual Ticketing system Seniors can register for the Senior Virtual Ticketing as long as they are 65 or older and have valid photo ID with proof of age. And any patron requiring Accessible (ADA) seating can specify this when registering and specific tickets will be provided according to their specific needs. In addition to the ticket line at the Delacorte Theater and Virtual Ticketing online, a limited number of vouchers for specific performances are distributed at locations throughout New York City's five boroughs on certain days during the run of a production. Each person in line is allowed two vouchers and each voucher is good for one ticket for that evening’s performance. Vouchers must be exchanged for tickets at the Delacorte Theater box office that same day from 4:30 p.m. to 7:30 p.m. Tickets cannot be exchanged in the event the performance is rained-out which is a possibility. A performance will never be cancelled before the scheduled start time and may continue in the rain if it is deemed safe by the production staff. Late seating is at the discretion of management and may not be granted until 30-40 minutes into the show.[2]

In 2015, the Public introduced its partnership with the app Today Tix. [3] Every day app users can log on and apply for the virtual lottery for that days show. Winners are notified after noon of the day of the performance.

At least one work by Shakespeare is always included in the festival's seasonal lineup. Only once was Shakespeare not included when a dispute occurred between Papp and the City of New York over public funding for his productions at the Delacorte. Papp denied the city any Shakespeare at the Delacorte for a summer, moving the Public's production of Pirates of Penzance to the uptown location. The Public Theater is heavily reliant on private donors. In 2005, the theater company was among 406 New York City arts and social service institutions to receive part of a $20 million grant from the Carnegie Corporation, which was made possible through a donation by then-NYC Mayor Michael Bloomberg.[4]

The festival has also produced musicals, both new and revived, such as On the Town, Two Gentlemen of Verona, The Mystery of Edwin Drood, the Tony Award winning revival of Hair, and Into the Woods. The 2013 season featured the new musical adaptation of Love's Labour's Lost by Michael Friedman and Alex Timbers. [5]

Many plays from the summer festival have gone on to Broadway, including Wilford Leach's staging of The Mystery of Edwin Drood from the 1984–1985 season and The Tempest from the 1995–1996 season. The festival has also attracted many well-known actors, such as Meryl Streep, Morgan Freeman, Martin Sheen, and Al Pacino – the latter two of whom appeared as Brutus and Marc Antony in a toga-clad historical production of Julius Caesar, directed by Stuart Vaughan in 1987, in the first of the NYSF's Shakespeare Marathon. Since its inception, the festival has become popular with both New York natives and visitors to the city, and while the Delacorte Theater has 1,872 seats [2], prospective theatergoers can expect to sit in line for hours before the early afternoon ticket distribution. Approximately 80,000 people attend Shakespeare in the Park every year.[6]

Sponsorship of other theatres

Over the years, the New York Shakespeare Festival supported other theatre companies throughout New York, helping to foster the growth of Off Broadway, as well as specific theatre programs and projects. Among these companies that benefited from NYSF during critical periods of their development was the Theatre for a New Audience. The Theatre for a New Audience developed a number of productions sponsored by the NYSF, including A Midsummer Nights Dream, presented at the Ansbacher Theatre, and through this sponsorship, the company was able to grow and expand its outreach to new audiences. Another such company was the Riverside Shakespeare Company. The Festival, under Papp's leadership, sponsored several Riverside Shakespeare Company productions at a critical stage in its development, beginning with Riverside's New York premiere production of Brecht's Edward II in 1982 at The Shakespeare Center on the Upper West Side (dedicated by Joseph Papp in 1982), followed by Equity parks tours of free Shakespeare throughout the five boroughs of New York City, much as the NYSF had done for years before. Riverside Shakespeare Company summer parks tour of Free Shakespeare sponsored by the NYSF began with A Comedy of Errors in 1982, followed by The Merry Wives of Windsor, featuring Anna Deavere Smith in her New York stage debut as Mistress Quickly, Romeo and Juliet, and The Taming of the Shrew. During the NYSF period of support, the Riverside Shakespeare Company expanded greatly, offering for the first time The Shakespeare Project in 1983, and serving a wide range of audiences in the five boroughs.[citation needed]