From Infogalactic: the planetary knowledge core
Jump to: navigation, search
File:Shallow water waves.gif
Output from a shallow water equation model of water in a bathtub. The water experiences five splashes which generate surface gravity waves that propagate away from the splash locations and reflect off the bathtub walls.

The equations are derived[1] from depth-integrating the Navier–Stokes equations, in the case where the horizontal length scale is much greater than the vertical length scale. Under this condition, conservation of mass implies that the vertical velocity of the fluid is small. It can be shown from the momentum equation that vertical pressure gradients are nearly hydrostatic, and that horizontal pressure gradients are due to the displacement of the pressure surface, implying that the horizontal velocity field is constant throughout the depth of the fluid. Vertically integrating allows the vertical velocity to be removed from the equations. The shallow water equations are thus derived.

Situations in fluid dynamics where the horizontal length scale is much greater than the vertical length scale are common, so the shallow water equations are widely applicable. They are used with Coriolis forces in atmospheric and oceanic modeling, as a simplification of the primitive equations of atmospheric flow.

Here η is the total fluid column height, and "H" is the water depth if the surface is at rest. The 2D vector (u,v) is the fluid's horizontal velocity, averaged across the vertical column. g is acceleration due to gravity. The first equation is derived from mass conservation, the second two from momentum conservation.[2]

Expanding the derivatives in the above using the product rule, we obtain non-conservative forms of the shallow-water equations. Since velocities are not subject to a fundamental conservation equation, the non-conservative forms do not hold across a shock or hydraulic jump. When we include also the appropriate terms for Coriolis, frictional and viscous forces, we obtain:

It is often the case that the terms quadratic in u and v, which represent the effect of bulk advection, are small compared to the other terms. This is called geostrophic balance, and is equivalent to saying that the Rossby number is small. Assuming also that the wave height is very small compared to the mean height (h ≪ H), we have: 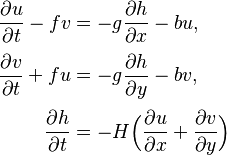 Shallow water equations can be used to model Rossby and Kelvin waves in the atmosphere, rivers, lakes and oceans as well as gravity waves in a smaller domain (e.g. surface waves in a bath). In order for shallow water equations to be valid, the wavelength of the phenomenon they are supposed to model has to be much higher than the depth of the basin where the phenomenon takes place. Shallow water equations are especially suitable to model tides which have very large length scales (over hundred of kilometers). For tidal motion, even a very deep ocean may be considered as shallow as its depth will always be much smaller than the tidal wavelength.