From Infogalactic: the planetary knowledge core
Jump to: navigation, search
For the greeting, see shalom aleichem. For other uses, see Shalom (disambiguation). 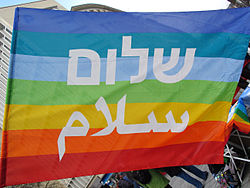 Shalom (שָׁלוֹם) (Sephardic Hebrew/Israeli Hebrew: shalom; Ashkenazi Hebrew/Yiddish: sholom, sholem, sholoim, shulem) is a Hebrew word meaning peace, harmony, wholeness, completeness, prosperity, welfare and tranquility and can be used idiomatically to mean both hello and goodbye.[1][2][3] As it does in English, it can refer to either peace between two entities (especially between man and God or between two countries), or to the well-being, welfare or safety of an individual or a group of individuals. Stendebach and Ringgren writes that a more thorough etymological analysis of Hebrew roots reveal that 'Lom was the basic root word for Shalom.[4][5][6][7][8][9][10][11] The word shalom is also found in many other expressions and names. Its equivalent cognate in Arabic is salaam, sliem in Maltese, Shlama in Syriac-Assyrian and sälam in Ethiopian Semitic languages from the Proto-Semitic root Š-L-M.

In Hebrew, the root of the word (usually in a three or occasionally four letter format), and depending on the vowels that are used, has several meanings (that are relevant to the general meaning of the word Shalom); as for example: One meaning is "Whole", another could be the actual verb "Pay" usually in command form. The conjugated verb has other spins that are worth noting, such as: "Hishtalem" meaning "it was worth it" or "Shulam" as "it was paid for" or "Meshulam" as in "paid in advance."[citation needed] Hence one can jokingly say that, "when it's paid-for then there is peace."

The Hebrew term shalom is roughly translated to other languages as peace [En.] (i.e. paz [Sp. and Pr.], paix [Fr.], pace [It.]), from the Latin pax. Pax, in Latin, means peace, but it was also used to mean truce or treaty. So, deriving from the definition and use in Latin, most Romance terms simply use the word peace to mean such, and also provides a relational application (be it personal, social or political) – a state of mind and affairs. Peace is an important word in the Christian sacred scriptures and liturgy. Eirene, the Greek term translated to peace, also means quietness and rest.

Shalom, in the liturgy and in the transcendent message of the Christian scriptures, means more than a state of mind, of being or of affairs. Derived from the Hebrew root shalam – meaning to be safe or complete, and by implication, to be friendly or to reciprocate. Shalom, as term and message, seems to encapsulate a reality and hope of wholeness for the individual, within societal relations, and for the whole world. To say joy and peace, meaning a state of affairs where there is no dispute or war, does not begin to describe the sense of the term. Completeness seems to be at the center of shalom as we will see in the meaning of the term itself, in some derivatives from its root, shalam, in some examples of its uses in Jewish and Christian Scriptures, and in some homophone terms from other Semitic languages.

The noun shalom means safe, for example, well and happy. On a more abstract application, its use points to welfare, for example, health, prosperity, and, peace. It is the verb form shalam, though, that provides a deeper understanding of this term in theology, doctrine, and liturgy. Literally translated, shalam signals to a state of safety, but figuratively it points to completeness. In its use in Scripture, shalom describes the actions that lead to a state of soundness, or better yet wholeness. So to say, shalom seems not to merely speak of a state of affairs, but describes a process, an activity, a movement towards fullness. Using the King James Version as reference, James Strong lists the rendering of shalom and shalam, among others, as:

The use of shalom in the Scriptures always points towards that transcendent action of wholeness. Shalom is seen in reference to the wellbeing of others (Genesis 43.27, Exodus 4.18), to treaties (I Kings 5.12), and in prayer for the wellbeing of cities or nations (Psalm 122.6, Jeremiah 29.7). Coincidentally, the root shalem, means peaceful - though it is sometimes posited that this root is found in the name of the city Jerusalem (combined with yara, meaning to lay or found), this is likely a re-etymologization.[12] Yet, its transcendence lies in its relationship to truth and justice (Psalm 85.10, Isaiah 48.18, 22, 57.19–21). The wholeness of shalom, through justice and truth, inspires the words of hope for the work expected by the messiah, and to refer to its revelation as the time of peace (Haggai 2.7–9, Isaiah 2.2–4, 11.1–9), and to even grant this anointed one the title Prince of Peace (Isaiah 9.6, Micah 5.4–5a).

In the Christian Scriptures, the term eirene is employed to mean peace, but in its application, seeking for it the transcendence of its Hebrew counterpart, peace is better understood in relation to terms like grace (Romans 1.7), righteousness (Romans 14.17), and life (Romans 8.6). It is also employed in benedictions, like that in I Thessalonians 5.23 and Hebrews 13.20–21, perhaps making echo to prayers of peace common throughout the Hebrew Scriptures and Jewish benedictions (Numbers 6.22–27).

This sense of completeness, central to the term shalom could also be confirmed in homophonic terms found in other Semitic languages. The term shelam, of Chaldean origin, seems to mean both peace and restoration. Aramaic derivations of the terms shalom and shalam are said to mean peace, safety, completeness and welfare. The Assyrian term salamu means to be complete, unharmed, paid/atoned. Sulmu, another Assyrian term, means welfare. A closer relation to the idea of shalom as concept and action is seen in the Arabic root salaam. Meaning to be safe, secure, and forgiven, among other things. It also proposes a personal commitment to the concept, action, and transcendence of peace – Salaam is also the root for the terms Muslim and Islam, literally translated, he/she who submits to God and submission to God, respectively.

The word "shalom" can be used for all parts of speech; as a noun, adjective, verb, adverb, and interjection. It categorizes all shaloms. The word shalom is used in a variety of expressions and contexts in Hebrew speech and writing:

As a Jewish religious principle

In the book Not the Way It’s Supposed to Be: A Breviary of Sin, author Cornelius Plantinga described the Old Testament concept of shalom:

The webbing together of God, humans, and all creation in justice, fulfillment, and delight is what the Hebrew prophets call shalom. We call it peace but it means far more than mere peace of mind or a cease-fire between enemies. In the Bible, shalom means universal flourishing, wholeness and delight – a rich state of affairs in which natural needs are satisfied and natural gifts fruitfully employed, a state of affairs that inspires joyful wonder as its Creator and Savior opens doors and welcomes the creatures in whom he delights. Shalom, in other words, is the way things ought to be.[17]

Use as a name

Shalom as a name for God

The Talmud says "the name of God is 'Peace'", therefore, one is not permitted to greet another with the word shalom in places such as a bathroom.[18]

Shalom as a name for people

Shalom is also common in modern Hebrew in Israel, as a given name or a surname. It is usually used by men as a given name but there are women named Shalom as well—e.g., the model Shalom Harlow.

As a name for organizations

Shalom can be part of an organization's name.

For example, the names of the following organizations and places refer to "peace" between Israel and its Arab neighbors:

As name for synagogues or structures

Shalom is used as part of other names, such as for synagogues, as in:

As the name for events