From Infogalactic: the planetary knowledge core
Jump to: navigation, search
This article is about psychological, philosophical, and societal aspects of shame. For other uses, see Shame (disambiguation). 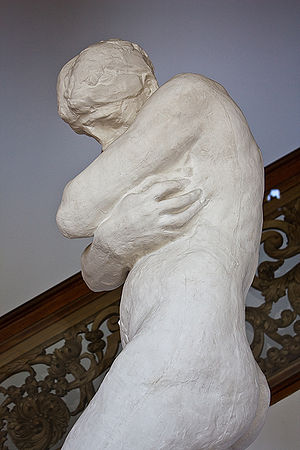 Eve covers herself and lowers her head in shame in Rodin's Eve after the Fall.

Shame is a painful, social emotion that can be seen as resulting "...from comparison of the self's action with the self's standards...".[1] but which may equally stem from comparison of the self's state of being with the ideal social context's standard. Thus, shame may stem from volitional action or simply self-regard; no action by the shamed being is required: simply existing is enough. Both the comparison and standards are enabled by socialization. Though usually considered an emotion, shame may also variously be considered an affect, cognition, state, or condition.

The roots of the word shame are thought to derive from an older word meaning "to cover"; as such, covering oneself, literally or figuratively, is a natural expression of shame.[2] Nineteenth century scientist Charles Darwin, in his book The Expression of the Emotions in Man and Animals, described shame affect as consisting of blushing, confusion of mind, downward cast eyes, slack posture, and lowered head, and he noted observations of shame affect in human populations worldwide.[3] He also noted the sense of warmth or heat (associated with the vasodilation of the face and skin) occurring in intense shame.

A "sense of shame" is the consciousness or awareness of shame as a state or condition. Such shame cognition may occur as a result of the experience of shame affect or, more generally, in any situation of embarrassment, dishonor, disgrace, inadequacy, humiliation, or chagrin.[4]

A condition or state of shame may also be assigned externally, by others, regardless of one's own experience or awareness. "To shame" generally means to actively assign or communicate a state of shame to another. Behaviors designed to "uncover" or "expose" others are sometimes used for this purpose, as are utterances like "Shame!" or "Shame on you!" Finally, to "have shame" means to maintain a sense of restraint against offending others (as with modesty, humility, and deference) while to "have no shame" is to behave without such restraint (as with excessive pride or hubris).

Comparison with guilt and embarrassment 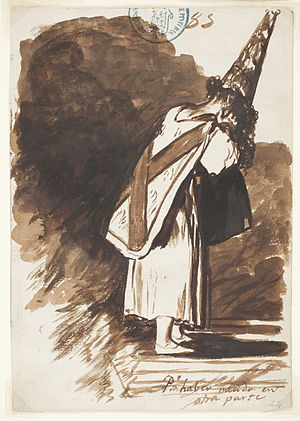 Person hiding face and showing posture of shame (while wearing a Sanbenito and coroza hat) in Goya's sketch "For being born somewhere else". The person has been shamed by the Spanish Inquisition.

The location of the dividing line between the concepts of shame, guilt, and embarrassment is not fully standardized.[5] According to cultural anthropologist Ruth Benedict, shame is a violation of cultural or social values while guilt feelings arise from violations of one's internal values. Thus shame arises when one's 'defects' are exposed to others, and results from the negative evaluation (whether real or imagined) of others; guilt, on the other hand, comes from one's own negative evaluation of oneself, for instance, when one acts contrary to one's values or idea of one's self.[6] (Thus, it might be possible to feel ashamed of thought or behavior that no one actually knows about [since one fears their discovery] and conversely, to feel guilty about actions that gain the approval of others.)

Psychoanalyst Helen B. Lewis argued that, "The experience of shame is directly about the self, which is the focus of evaluation. In guilt, the self is not the central object of negative evaluation, but rather the thing done is the focus."[7] Similarly, Fossum and Mason say in their book Facing Shame that "While guilt is a painful feeling of regret and responsibility for one's actions, shame is a painful feeling about oneself as a person."[8]

Following this line of reasoning, Psychiatrist Judith Lewis Herman concludes that "Shame is an acutely self-conscious state in which the self is 'split,' imagining the self in the eyes of the other; by contrast, in guilt the self is unified."[9]

Clinical psychologist Gershen Kaufman's view of shame is derived from that of Affect Theory, namely that shame is one of a set of instinctual, short-duration physiological reactions to stimulation.[10][11] In this view, guilt is considered to be a learned behavior consisting essentially of self-directed blame or contempt, with shame occurring consequent to such behaviors making up a part of the overall experience of guilt. Here, self-blame and self-contempt mean the application, towards (a part of) one's self, of exactly the same dynamic that blaming of, and contempt for, others represents when it is applied interpersonally.

Kaufman saw that mechanisms such as blame or contempt may be used as a defending strategy against the experience of shame and that someone who has a pattern of applying them to himself may well attempt to defend against a shame experience by applying self-blame or self-contempt. This, however, can lead to an internalized, self-reinforcing sequence of shame events for which Kaufman coined the term "shame spiral".[10] (However, notice that the word "shame spiral" or "spiral of shame " might also be used to indicate *public shaming*, I.e. The behavior of attacking somebody in mass for his/her viewpoints or particular words. This can especially refer to cyber bullying). Shame can also be used as a strategy when feeling guilt, in particular when there is the hope to avoid punishment by inspiring pity.[12]

One view of difference between shame and embarrassment says that shame does not necessarily involve public humiliation while embarrassment does; that is, one can feel shame for an act known only to oneself but in order to be embarrassed one's actions must be revealed to others. In the field of ethics (moral psychology, in particular), however, there is debate as to whether or not shame is a heteronomous emotion, i.e. whether or not shame does involve recognition on the part of the ashamed that they have been judged negatively by others.

Immanuel Kant and his followers held that shame is heteronomous (comes from others); Bernard Williams and others have argued that shame can be autonomous (comes from oneself).[14][15] Shame may carry the connotation of a response to something that is morally wrong whereas embarrassment is the response to something that is morally neutral but socially unacceptable. Another view of shame and embarrassment says that the two emotions lie on a continuum and only differ in intensity. Simply put: A person who feels guilt is saying "I did something bad.", while someone who feels shame is saying "I am bad". There is a big difference between the two.[citation needed]

Gershen Kaufman summed up many of the consequences of shame in one paragraph of his book on the psychology of shame:[19]

...shame is important because no other affect is more disturbing to the self, none more central for the sense of identity. In the context of normal development, shame is the source of low self-esteem, diminished self image, poor self concept, and deficient body-image. Shame itself produces self-doubt and disrupts both security and confidence. It can become an impediment to the experience of belonging and to shared intimacy....It is the experiential ground from which conscience and identity inevitably evolve. In the context of pathological development, shame is central to the emergence of alienation, loneliness, inferiority and perfectionism. It plays a central role in many psychological disorders as well, including depression, paranoia, addiction, and borderline conditions. Sexual disorders and many eating disorders are largely disorders of shame. Both physical abuse and sexual abuse also significantly involve shame.

Also, "...shame has been found to be a very strong predictor of Posttraumatic Stress Disorder...".[20]

It has been suggested that narcissism in adults is related to defenses against shame[21] and that narcissistic personality disorder is connected to shame as well.[22][23] Psychiatrist Glen Gabbard suggested that NPD could be broken down into two subtypes, a grandiose, arrogant, thick-skinned "oblivious" subtype and an easily hurt, oversensitive, ashamed "hypervigilant" subtype. The oblivious subtype presents for admiration, envy, and appreciation a grandiose self that is the antithesis of a weak internalized self which hides in shame, while the hypervigilant subtype neutralizes devaluation by seeing others as unjust abusers.[22]

Shame is considered one aspect of socialization in all societies. According to the anthropologist Ruth Benedict, cultures may be classified by their emphasis on the use of either shame or guilt to regulate the social activities of individuals.[24] Shared opinions and expected behaviours and potential associated feelings of shame are in any case proven to be effective in guiding behaviour of a group or society.[citation needed]

Shame may be used by those people who commit relational aggression and may occur in the workplace as a form of overt social control or aggression. Shaming is also a central feature of punishment, shunning, or ostracism. In this sense, ‟the real purpose of shaming is not to punish crimes but to create the kind of people who don't commit them‟.[25] In addition, shame is often seen in victims of child neglect and child abuse.[citation needed]

A shame campaign is a tactic in which particular individuals are singled out because of their behavior or suspected crimes, often by marking them publicly, such as Hester Prynne in Nathaniel Hawthorne's The Scarlet Letter. In the Philippines, Alfredo Lim popularized such tactics during his term as mayor of Manila. On July 1, 1997, he began a controversial "spray paint shame campaign” in an effort to stop drug use. He and his team sprayed bright red paint on two hundred squatter houses whose residents had been charged, but not yet convicted, of selling prohibited substances. Officials of other municipalities followed suit. Former Senator Rene A. Saguisag condemned Lim’s policy.[26]

Public humiliation, historically expressed by confinement in stocks and in other public punishments may occur in social media through viral phenomena.[27]

Psychologists and other researchers who study shame use validated psychometric testing instruments to determine whether or how much a person feels shame. Some of these tools include the Guilt and Shame Proneness (GASP) Scale,[28] the Shame and Stigma Scale (SSS), the Experience of Shame Scale, and the Internalized Shame Scale. Some scales are specific to the person's situation, such as the Weight- and Body-Related Shame and Guilt scale (WEB-SG), the HIV Stigma Scale for people living with HIV and the Cataldo Lung Cancer Stigma Scale (CLCSS) for people with lung cancer.[29] Others are more general, such as the Emotional Reactions and Thoughts Scale, which deals with anxiety, depression, and guilt as well as shame.