From Infogalactic: the planetary knowledge core
Jump to: navigation, search
This article is about the dialect. For the people, see Shanghainese people.

Shanghainese, also known as the Shanghai or Hu dialect, is a dialect of Wu Chinese spoken in the central districts of Shanghai and in the surrounding region. It is classified as part of the Sino-Tibetan family of languages. Shanghainese, like other Wu dialects, is largely unintelligible with other varieties of Chinese such as Mandarin.

In English, "Shanghainese" sometimes refers to all Wu dialects, although they are only partially intelligible with one another. Shanghainese proper is a representative dialect of Northern Wu; it contains vocabulary and expressions from the entire Northern Wu area of southern Jiangsu and northern Zhejiang. With nearly 14 million speakers, Shanghainese is also the largest single form of Wu Chinese. It once served as the lingua franca of the entire Yangtze River Delta region.

Shanghainese is rich in vowels [z̩ ʑ̩ i y ɪ ei ø ɛ ə a ɑ ɔ ɤɯ o ʊ u] (nine of which are phonemic) and in consonants. Like other northern Wu dialects, the Shanghai dialect has voiced initials [b d ɡ ɦ z v dʑ ʑ]. Neither Mandarin nor Cantonese has voiced initial stops or affricates. The Shanghainese tonal system is also significantly different from other Chinese varieties. Shanghainese has two level tonal contrasts (high and low), while Mandarin and Cantonese are typical of contour tonal languages.

Shanghai did not become a regional centre of commerce until it was opened to foreign investment during the late Qing dynasty. Consequently, dialects spoken around Shanghai had long been subordinate to those spoken around Jiaxing and later Suzhou. In the late 19th century, most vocabulary of the Shanghai region had been a hybrid between Northern Jiangsu and Ningbo dialects.[1] Since the 1850s, owing to the growth of Shanghai's economy, Shanghainese has become one of the fastest-developing dialects of Wu Chinese, undergoing rapid changes and quickly replacing Suzhou dialect as the prestige dialect of the region. It underwent sustained growth that reached a hiatus in the 1930s during the Republican era, when migrants arrived in Shanghai and immersed themselves in the local tongue.

After 1949, the government introduced Mandarin as the national language of all China. The influence of Shanghainese began to wane. Especially since Chinese economic reform began in 1978, Shanghai became home to a great number of migrants from all over the country. Due to the national prominence of Mandarin, learning Shanghainese was no longer necessary for migrants, because those educated after the 1950s could generally communicate in Mandarin. However, Shanghainese remained a very important part of the city's culture and retained its prestige status within the local population. In the 1990s, it was still common for local radio and television broadcasts to be in Shanghainese. In 1995, the TV series Sinful Debt featured extensive Shanghainese dialogues; when it was broadcast outside of Shanghai (mainly in adjacent Wu-speaking provinces) Mandarin subtitles were added. The Shanghainese TV show "Lao Niang Jiu" (Old Uncle) has been broadcast since 1999, and is still quite popular among Shanghainese residents. Shanghainese programming has since declined, over concerns of regionalism/localism accusations.

From 1992 Shanghainese use was discouraged in schools,[2] and many children native to Shanghai can no longer speak Shanghainese.[3] In addition, Shanghai's emergence as a cosmopolitan global city consolidated the status of Mandarin as the standard language of business and services.[1]

Since 2005, new movements have emerged to protect Shanghainese. At municipal legislative discussions in 2005, former Huju actress Ma Lili moved to "protect" the dialect, stating that she was one of the few remaining Huju actresses who still retained authentic classic Shanghainese pronunciation in their performances. Shanghai's former party boss Chen Liangyu, a native Shanghainese himself, reportedly supported her proposal.[1] There have been talks of re-integrating Shanghainese into pre-kindergarten education, because many children are unable to speak any Shanghainese. Now many Shanghai-dialect programs are running; a citywide program was introduced by the city government's language committee in 2006 to record native speakers of different Shanghainese varieties for archival purposes.[4]

The Shanghai government has begun to reverse its course and seek fluent speakers of "real" authentic Shanghainese, but to their horror, due to the national government's effort to wipe out dialects and locality-focused aspects of Chinese culture, only two out of thirteen recruitment stations have found Traditional Shanghainese speakers; the rest of the 14 million people of Shanghai speak Modern Shanghainese, and it has been predicted that local dialects will be wiped out. Professor Qian Nairong is working on efforts to save the dialect.[5][6] Qian Nairong is promoting Shanghainese language and culture in the face of an onslaught of Mandarin by the national government which left schoolchildren speaking poor Shanghainese. In response to criticism, Qian reminds people that Shanghainese was once fashionable, saying, "the popularization of Mandarin doesn't equal the ban of dialects. It doesn't make Mandarin a more civilized language either. Promoting dialects is not a narrow-minded localism, as it has been labeled by some netizens.”[7] The singer and composer Eheart Chen sings many of his songs in Shanghainese instead of Mandarin to preserve the dialect.[8]

Since 2006 the Modern Baby Kindergarten in Shanghai has prohibited its students from speaking anything but Shanghainese on Fridays to preserve the dialect.[9]

Professor Qian says that few Shanghainese people under the age of sixty can speak real Shanghainese, and he urges that Shanghainese be taught in the regular school system from kindergarten, saying it is the only way to save Shanghainese, and that attempts to introduce it in university courses and operas are not enough.[10]

Fourteen native Shanghainese speakers had audio recordings made of their Shanghainese on May 31, 2011. They were selected based on accent purity and other factors.[11]

Shanghainese is not mutually intelligible with any dialect of Mandarin. It is around 50% intelligible (with 28.9% lexical similarity) with the Mandarin heard in Beijing and Standard Chinese.[12] Modern Shanghainese, however, has been heavily influenced by modern Mandarin. This makes the Shanghainese spoken by young people in the city different from that spoken by the older population, sometimes significantly. It also means that inserting Mandarin into Shanghainese sentences during everyday conversation is very common, at least amongst young people. Like most subdivisions of Chinese, it is easier for a local speaker to understand Mandarin than it is for a Mandarin speaker to understand the local speech.

Shanghainese is part of the larger Wu subgroup of Chinese varieties. It is similar, to a certain degree, to the speech of neighboring Kunshan, Suzhou, and Ningbo. People mingling between these areas do not need to code-switch to Mandarin when they speak to one another. However, there are noticeable tonal and phonological changes which do not impede intelligibility. As the dialect continuum of Wu continues to further distances, however, significant changes occur in phonology and lexicon to the point where it is no longer possible to converse intelligibly. The majority of Shanghainese speakers find that by Wuxi, differences become significant and the Wuxi dialect would take weeks to months for a Shanghainese speaker to fully "pick up." Similarly, Hangzhou dialect is understood by most Shanghainese speakers, but it is considered "rougher" and does not have as much flow in comparison. The language evolved in and around Taizhou, Zhejiang, by which point it becomes difficult for a Shanghainese speaker to comprehend. Wenzhou dialect, spoken in southern Zhejiang province, although considered part of the Wu subgroup, is not at all intelligible with Shanghainese.

Shanghainese is not mutually intelligible with Wenzhou dialect, Cantonese, Minnan, or any other dialect groups of Chinese.

Shanghainese has a set of voiced as well as voiceless aspirated and tenuis/unaspirated plosives. It also has fricatives, affricates Alveolo-palatal initials.

Shanghainese has five phonetically distinguishable tones for single syllables said in isolation. These tones are illustrated below in Chao tone names. In terms of Middle Chinese tone designations, the yin tone category has three tones (yinshang and yinqu tones have merged into one tone), while the yang category has two tones (the yangping, yangshang, and yangqu have merged into one tone).[19][20]

The ru tones are abrupt, and describe those rimes which end in a glottal stop /ʔ/. That is, both the yin–yang distinction and the ru tones are allophonic (dependent on syllabic structure). Shanghainese has only a two-way phonemic tone contrast,[21] falling vs rising, and then only in open syllables with voiceless initials.

Word tone sandhi in Shanghainese can be described as left-prominent and is characterized by a dominance of the first syllable over the contour of the entire tone domain. As a result, the underlying tones of syllables other than the leftmost syllable, have no effect on the tone contour of the domain. The pattern is generally described as tone spreading (T1-4) or tone shifting (T5, except for 4- and 5-syllable compounds, which can undergo spreading or shifting). The table below illustrates possible tone combinations.

As an example, in isolation, the two syllables of the word for China are pronounced with T1 and T4: /tsʊŋ52/ and /kwəʔ44/. However, when pronounced in combination, T1 from /tsʊŋ/ spreads over the compound resulting in the following pattern /tsʊŋ55kwəʔ22/. Similarly, the syllables in a common expression for foolish have the following underlying phonemic and tonal representations: /zəʔ24/ (T5), /sɛ52/ (T1), and /ti34/ (T2). However, the syllables in combination exhibit the T5 shifting pattern where the first-syllable T5 shifts to the last syllabe in the domain: /zəʔ11sɛ11ti24/.[22]

Common words and phrases in Shanghainese

Note: Chinese characters for Shanghainese are not standardized and are provided for reference only. IPA transcription is for the Middle period of modern Shanghainese (中派上海话), pronunciation of those between 20 and 60 years old.

The first-person pronoun is suffixed with 伲,[clarification needed] and third-person with [la˦] (underlying /la˥˧/), but the second-person plural is a separate root, [nʌ˨˧].[25] 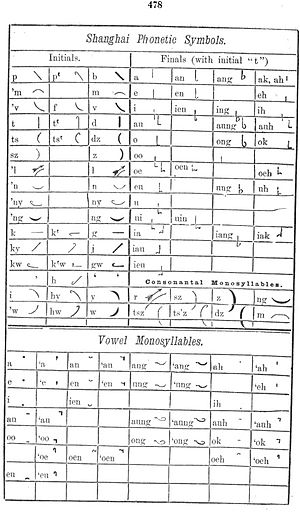 A table of Shanghai Phonetic Symbols by Rev. J. A. Silsby

Shanghainese Phonetic Symbols were another phonetic script created by Protestant missionaries in the 1800s to write Shanghainese phonetically. The symbols are a syllabary similar to the Japanese Kana system. The system has not been used and is only seen in a few books.[27][28]