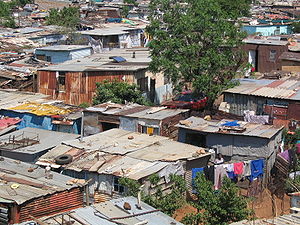 A shanty town or squatter area is a settlement of plywood, corrugated metal, sheets of plastic, and cardboard boxes. Such settlements are usually found on the periphery of cities, in public parks, or near railroad tracks, rivers, lagoons or city trash dump sites. Sometimes called a squatter, informal or spontaneous settlement, a typical shanty town often lacks proper sanitation, safe water supply, electricity, hygienic streets, or other basic human necessities.

Shanty towns are mostly found in developing nations, but also in some parts of developed nations.[1][2][3] 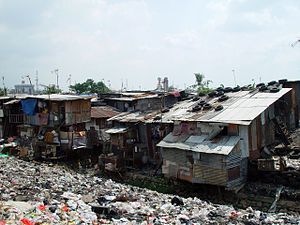 A shanty town in Jakarta, Indonesia

Shanty is probably from Canadian French chantier, a winter station established for the organization of lumberjacks.[4]

Another possible derivation is from the Irish language sean tí meaning old house.

Hutment means an "encampment of huts". When the term is used by the military, it means "temporary living quarters specially built by the army for soldiers".[5] The term is also a synonym for shanty town, particularly in developing countries.

Shanty towns sometimes have an active informal economy, such as garbage sorting, pottery making, textiles and leather works. This allows the poor to earn a livelihood. The above shanty town image is from Ezbet Al Nakhl, in Cairo Egypt, where garbage is sorted manually. Residential area is visible at the top of the image.

Since construction is informal and unguided by urban planning, there is typically no formal street grid, numbered or named streets. Such settlements also lack some or all basic public services such as a sewage network, electricity, safe running water, rain water drainage, garbage removal, access to public transport, insect and disease control services. Even if these resources are present, they are likely to be disorganized, unreliable and poorly maintained. Shanty towns also tend to lack basic services present in more formally organized settlements, including policing, mail delivery, medical services and fire fighting. Fires are a particular danger for shanty towns not only for the lack of fire fighting stations and the difficulty fire trucks have traversing the settlement in the absence of formal street grids,[6] but also because of the high density of buildings and flammability of materials used in construction.[7] A sweeping fire on the hills of Shek Kip Mei, Hong Kong, in late 1953 left 53,000 dwellers homeless, prompting the colonial government to institute a resettlement estate system.

Shanty towns have high rates of crime, suicide, drug use and disease. However, Swiss journalist Georg Gerster has noted (with specific reference to the invasões of Brasilia) that "squatter settlements [as opposed to slums], despite their unattractive building materials, may also be places of hope, scenes of a counter-culture, with an encouraging potential for change and a strong upward impetus".[8] Stewart Brand has also written, more recently, that "squatter cities are Green. They have maximum density—a million people per square mile in Mumbai—and minimum energy and material use. People get around by foot, bicycle, rickshaw, or the universal shared taxi ... Not everything is efficient in the slums, though. In the Brazilian favelas where electricity is stolen and therefore free, Jan Chipchase from Nokia found that people leave their lights on all day. In most slums recycling is literally a way of life." (2010)[9] 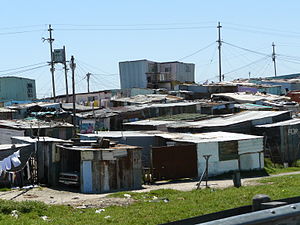 A shanty town near Cape Town, South Africa. These slums were built by the apartheid era government to segregate people by color and ethnic origin. The above Khayelitsha Township is Africa's largest, with shanty homes served with disorganized electrical lines, with one shed showing a car parked inside.

Although shanty towns are less common in developed countries, there are some cities that have them. While shanty towns are less common in Europe, the growing influx of immigrants have fueled shantytowns in cities commonly used as a point of entry into the EU, including Athens and Patras in Greece.[17] In Madrid, Spain, a low-class neighborhood named Cañada Real (which is considered a shanty town) has no formal education system, professional nurseries or modern health clinics and is considered the largest slum in Europe.[18] In Portugal, shanty towns known as "barracas" or "bairros de lata" are made up of immigrants from former Portuguese African colonies and Roma from Eastern Europe. Most of them are located in Lisbon Metropolitan Area. In the United States, some cities such as Newark and Oakland have witnessed the creation of tent cities. Other settlements in developed countries that are comparable to shanty towns include the Colonias near the border with Mexico, and bidonvilles in France, which may exist in the peripheries of some cities.

In some cases, shanty towns can persist in gentrified areas that local governments have yet to redevelop, or in regions of political dispute. Examples of this include Ras Khamis in Israel and the Kowloon Walled City in Hong Kong. 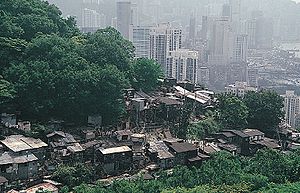 Shanty towns may be large or small settlements. Above shanty town is in Hong Kong.

While most shanty towns begin as precarious establishments haphazardly thrown together without basic social and civil services, over time, some have undergone a certain amount of development. Often the residents themselves are responsible for the major improvements.[19] Community organizations sometimes working alongside NGO's, private companies, and the government, set up connections to the municipal water supply, pave roads, and build local schools.[19] Some of these shanties have become middle class suburbs. One such extreme example is the Los Olivos Neighborhood of Lima, Peru. The Megaplaza shopping mall, one of Lima's largest, along with gated communities, casinos, and even plastic surgery clinics, are just a few of many developments that have transformed what used to be a decrepit shanty.[19] A few Brazilian favelas have also seen improvements in recent years, enough so to attract tourists who flock to catch a glimpse of the colorful lifestyle perched atop Rio de Janeiro's highlands.[20] Development occurs over a long period of time and newer towns still lack basic services. Nevertheless, there has been a general trend whereby shanties undergo gradual improvements, rather than relocation to even more distant parts of a metropolis and replacement by gated communities constructed over their ruins.[21] Many shanty towns are starting to implement the use of composting toilets[22] and solar panels,[23] and many of the people living in slums may have access to cell phones and even the internet.[24] However, in spite of all this, inequality associated with shanty towns has only increased over time.[25] 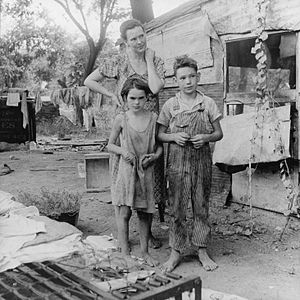 An impoverished American family living in a shanty during the Great Depression. Photographed by Dorothy Lange in 1936 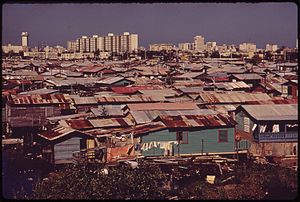 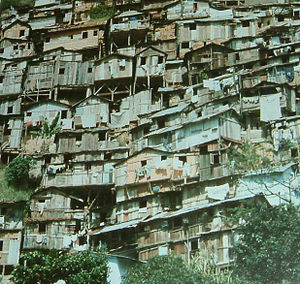 Chabolas a plomo - shanty town perched on the side of a steep mountain in Latin America. 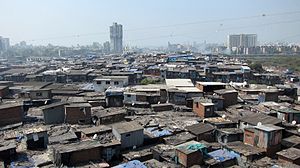 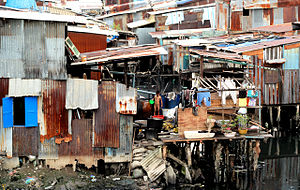 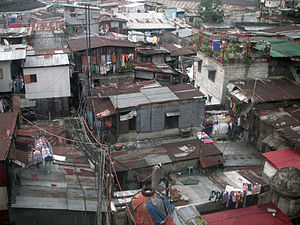 A shanty town in Manila, Philippines. 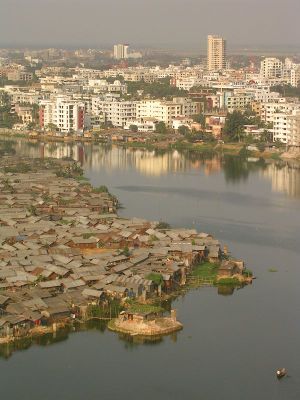