An illustration of a shared memory system of three processors.

In computer science, shared memory is memory that may be simultaneously accessed by multiple programs with an intent to provide communication among them or avoid redundant copies. Shared memory is an efficient means of passing data between programs. Depending on context, programs may run on a single processor or on multiple separate processors.

Using memory for communication inside a single program, e.g. among its multiple threads, is also referred to as shared memory. 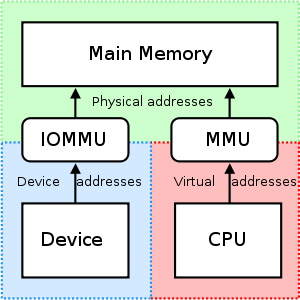 HSA defines a special case of memory sharing, where the MMU of the CPU and the IOMMU of the GPU have an identical pageable virtual address space.

In computer hardware, shared memory refers to a (typically large) block of random access memory (RAM) that can be accessed by several different central processing units (CPUs) in a multiprocessor computer system.

Shared memory systems may use:[1]

A shared memory system is relatively easy to program since all processors share a single view of data and the communication between processors can be as fast as memory accesses to a same location. The issue with shared memory systems is that many CPUs need fast access to memory and will likely cache memory, which has two complications:

Technologies like crossbar switches, Omega networks, HyperTransport or front-side bus can be used to dampen the bottleneck-effects.

In computer software, shared memory is either

Since both processes can access the shared memory area like regular working memory, this is a very fast way of communication (as opposed to other mechanisms of IPC such as named pipes, Unix domain sockets or CORBA). On the other hand, it is less scalable, as for example the communicating processes must be running on the same machine (of other IPC methods, only Internet domain sockets—not Unix domain sockets—can use a computer network), and care must be taken to avoid issues if processes sharing memory are running on separate CPUs and the underlying architecture is not cache coherent.

IPC by shared memory is used for example to transfer images between the application and the X server on Unix systems, or inside the IStream object returned by CoMarshalInterThreadInterfaceInStream in the COM libraries under Windows.

Dynamic libraries are generally held in memory once and mapped to multiple processes, and only pages that had to be customized for the individual process (because a symbol resolved differently there) are duplicated, usually with a mechanism known as copy-on-write that transparently copies the page when a write is attempted, and then lets the write succeed on the private copy.

The shared memory created by shm_open is persistent. It stays in the system until explicitly removed by a process. This has a drawback that if the process crashes and fails to clean up shared memory it will stay until system shutdown.

POSIX also provides the mmap API for mapping files into memory; a mapping can be shared, allowing the file's contents to be used as shared memory.

Linux distributions based on the 2.6 kernel and later offer /dev/shm as shared memory in the form of a RAM disk, more specifically as a world-writable directory (a directory in which every user of the system can create files) that is stored in memory. Both the RedHat and Debian based distributions include it by default. Support for this type of RAM disk is completely optional within the kernel configuration file.[5]

On Windows the function CreateSharedMemory can be used to create a shared memory.[6] Alternatively one can use CreateFileMapping and MapViewOfFile functions to map a region of a file into memory in multiple processes.[7]

There is native support for shared memory also in programming languages besides C/C++. For example, PHP provides API to create a shared memory, similar to POSIX functions.[10]