Just north of Shchastya, there is the Luhansk power station, a large powerplant built in the 1950s. The town of Shchastya is situated on the river Seversky Donets. During the 2014 Russian invasion of Ukraine, the city became a key site of fighting.

To facilitate the governance of Luhansk Oblast during the War in Donbass, the Verkhovna Rada on 7 October 2014 made some changes in the administrative divisions, so that the localities in the government-controlled areas were grouped into districts. In particular, Shchastya was transferred from Luhansk Municipality to Novoaidar Raion.[2] 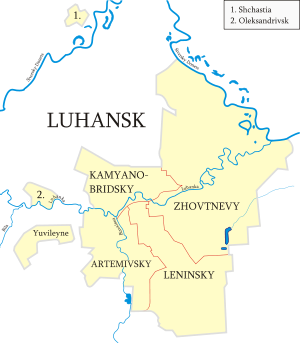 City on the map of Luhansk is identified by number "1".

In 2014 Shchastya was controlled by the separatist Lugansk People's Republic from late April 2014 till the Ukrainian army retook the city on 14 June 2014.[3]

On 5 August 2014, a monument of Lenin Lenin was removed from the city of Shchastya.

Native language as of the Ukrainian Census of 2001:[4]

Map of the town.