Sheet music is a handwritten or printed form of music notation that uses modern musical symbols. Like its analogs – books, pamphlets, etc. – the medium of sheet music typically is paper (or, in earlier times, parchment), although the access to musical notation in recent years also includes presentation on computer screens. Use of the term "sheet" is intended to differentiate written music from an audio presentation, as in a sound recording, broadcast or live performance, which may involve video as well. In everyday use, "sheet music" (or simply "music") can refer to the print publication of commercial music in conjunction with the release of a new film, show, record album, or other special or popular event which involves music. The first sheet of printed sheet music was made in 1473.

Sheet music is written representation of music. This is a homorhythmic (i.e., hymn-style) arrangement of a traditional piece entitled "Adeste Fideles", in standard two-staff format for mixed voices.

Score is a common alternative (and more generic) term for sheet music, and there are several types of scores, as discussed below. (Note: the term score can also refer to theatre music written for a play, musical, opera, ballet, television programme or film; for the last of these, see Film score.)

Sheet music can be used as a record of, a guide to, or a means to perform, a piece of music. Although it does not take the place of the sound of a performed work, sheet music can be studied to create a performance and to elucidate aspects of the music that may not be obvious from mere listening. Authoritative musical information about a piece can be gained by studying the written sketches and early versions of compositions that the composer might have retained, as well as the final autograph score and personal markings on proofs and printed scores.

Comprehending sheet music requires a special form of literacy: the ability to read music notation. Nevertheless, an ability to read or write music is not a requirement to compose music. Many composers have been capable of producing music in printed form without the capacity themselves to read or write in musical notation, as long as an amanuensis of some sort is available. Examples include the blind 18th-century composer John Stanley and the 20th-century songwriters Lionel Bart, Irving Berlin and Paul McCartney.

The skill of sight reading is the ability of a musician to perform an unfamiliar work of music upon viewing the sheet music for the first time. Sight reading ability is expected of professional musicians and serious amateurs who play classical music and related forms. An even more refined skill is the ability to look at a new piece of music and hear most or all of the sounds (melodies, harmonies, timbres, etc.) in one's head without having to play the piece.

With the exception of solo performances, where memorization is expected, classical musicians ordinarily have the sheet music at hand when performing. In jazz music, which is mostly improvised, sheet music – called a lead sheet in this context – is used to give basic indications of melodies, chord changes, and arrangements.

Handwritten or printed music is less important in other traditions of musical practice, however. Although much popular music is published in notation of some sort, it is quite common for people to learn a piece by ear. This is also the case in most forms of western folk music, where songs and dances are passed down by oral – and aural – tradition. Music of other cultures, both folk and classical, is often transmitted orally, though some non-western cultures developed their own forms of musical notation and sheet music as well.

Although sheet music is often thought of as being a platform for new music and an aid to composition (i.e., the composer writes the music down), it can also serve as a visual record of music that already exists. Scholars and others have made transcriptions to render western and non-western music in readable form for study, analysis and re-creative performance. This has been done not only with folk or traditional music (e.g., Bartók's volumes of Magyar and Romanian folk music), but also with sound recordings of improvisations by musicians (e.g., jazz piano) and performances that may only partially be based on notation. An exhaustive example of the latter in recent times is the collection The Beatles: Complete Scores (London: Wise Publications, 1993), which seeks to transcribe into staves and tablature all the songs as recorded by the Beatles in instrumental and vocal detail.

Modern sheet music may come in different formats. If a piece is composed for just one instrument or voice (such as a piece for a solo instrument or for a cappella solo voice), the whole work may be written or printed as one piece of sheet music. If an instrumental piece is intended to be performed by more than one person, each performer will usually have a separate piece of sheet music, called a part, to play from. This is especially the case in the publication of works requiring more than four or so performers, though invariably a full score is published as well. The sung parts in a vocal work are not usually issued separately today, although this was historically the case, especially before music printing made sheet music widely available.

Sheet music can be issued as individual pieces or works (for example, a popular song or a Beethoven sonata), in collections (for example works by one or several composers), as pieces performed by a given artist, etc.

When the separate instrumental and vocal parts of a musical work are printed together, the resulting sheet music is called a score. Conventionally, a score consists of musical notation with each instrumental or vocal part in vertical alignment (meaning that concurrent events in the notation for each part are orthographically arranged). The term score has also been used to refer to sheet music written for only one performer. The distinction between score and part applies when there is more than one part needed for performance. 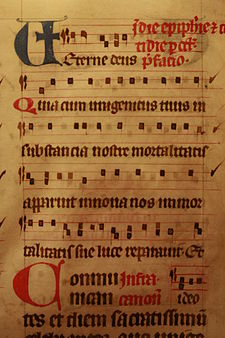 Before the 15th century, western music was written by hand and preserved in manuscripts, usually bound in large volumes. The best-known examples of these are medieval manuscripts of monophonic chant. In the case of medieval polyphony, such as the motet, the parts were written in separate portions of facing pages. This process was aided by the advent of mensural notation to clarify rhythm and was paralleled by the medieval practice of composing parts of polyphony sequentially, rather than simultaneously as in later times. Manuscripts showing parts together in score format were rare, and limited mostly to organum, especially that of the Notre Dame school.

Even after the advent of music printing, much music continued to exist solely in manuscripts well into the 18th century.

There were several difficulties in translating the new technology of printing to music. The first printed book to include music, the Mainz psalter (1457), had to have the notation added in by hand. This is similar to the room left in other incunabulae for capitals. The psalter was printed in Mainz, Germany by Johann Fust and Peter Schöffer, and one now resides in Windsor Castle and another at the British Library. Later, staff lines were printed, but scribes still added in the rest of the music by hand. The greatest difficulty in using movable type to print music is that all the elements must line up – the note head must be properly aligned with the staff, or else it means something other than it should. In vocal music, text must be aligned with the proper notes (although at this time, even in manuscripts, this was not a high priority).

The first machine-printed music appeared around 1473, approximately 20 years after Gutenberg introduced the printing press. In 1501, Ottaviano Petrucci published Harmonice Musices Odhecaton A, which contained 96 pieces of printed music. Petrucci's printing method produced clean, readable, elegant music, but it was a long, difficult process that required three separate passes through the printing press. Petrucci later developed a process which required only two passes through the press, but was still taxing since each pass required very precise alignment for the result to be legible. This was the first well distributed printed polyphonic music. Petrucci also printed the first tablature with movable type. Single impression printing first appeared in London around 1520. Pierre Attaingnant brought the technique into wide use in 1528, and it remained little changed for 200 years. 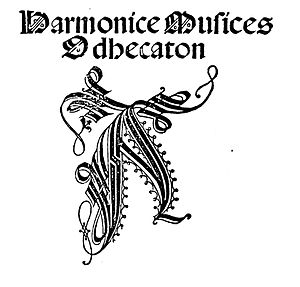 A common format for issuing multi-part, polyphonic music during the Renaissance was part-books. In this format, each voice-part for a collection of five-part madrigals, for instance, would be printed separately in its own book, such that all five part-books would be needed to perform the music. (The same part books could be used by singers or instrumentalists.) Scores for multi-part music were rarely printed in the Renaissance, although the use of score format as a means to compose parts simultaneously (rather than successively, as in the late Middle Ages) is credited to Josquin des Prez.

The effect of printed music was similar to the effect of the printed word, in that information spread faster, more efficiently and to more people than it could through manuscripts. It had the additional effect of encouraging amateur musicians of sufficient means, who could now afford music, to perform. This in many ways affected the entire music industry. Composers could now write more music for amateur performers, knowing that it could be distributed. Professional players could have more music at their disposal. It increased the number of amateurs, from whom professional players could then earn money by teaching them. Nevertheless, in the early years the cost of printed music limited its distribution.

In many places the right to print music was granted by the monarch, and only those with a special dispensation were allowed to do so. This was often an honour (and economic boon) granted to favoured court musicians.

In the late 20th and into the 21st century, significant interest has developed in representing sheet music in a computer-readable format (see music notation software), as well as downloadable files. Music OCR, software to "read" scanned sheet music so that the results can be manipulated, has been available since 1991. In 1998, virtual sheet music evolved further into what was to be termed digital sheet music, which for the first time allowed publishers to make copyright sheet music available for purchase online. Unlike their hard copy counterparts, these files allowed for manipulation such as instrument changes, transposition and MIDI (Musical Instrument Digital Interface) playback. The popularity of this instant delivery system among musicians appears to be acting as a catalyst of new growth for the industry well into the foreseeable future.

An early computer notation program available for home computers was Music Construction Set, developed in 1984 and released for several different platforms. Introducing concepts largely unknown to the home user of the time, it allowed manipulation of notes and symbols with a pointing device such as a mouse; the user would "grab" a note or symbol from a palette and "drop" it onto the staff in the correct location. The program allowed playback of the produced music through various early sound cards, and could print the musical score on a graphics printer.

Many software products for modern digital audio workstation and scorewriters for general personal computers support generation of sheet music from MIDI files or by manual entry.

In 1999, Harry Connick, Jr. invented a system and method for coordinating music display among players in an orchestra.[2] Connick's invention is a device with a screen which is used to show the sheet music for the musicians in an orchestra instead of the more commonly used paper. Connick uses this system when touring with his big band, for instance.[3]

Archives of works in other formats