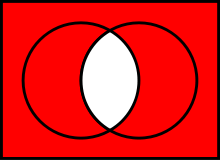 In Boolean functions and propositional calculus, the Sheffer stroke, named after Henry M. Sheffer, written "|" (see vertical bar, not to be confused with "||" which is often used to represent disjunction), "Dpq", or "↑" (an upwards arrow), denotes a logical operation that is equivalent to the negation of the conjunction operation, expressed in ordinary language as "not both". It is also called nand ("not and") or the alternative denial, since it says in effect that at least one of its operands is false. In Boolean algebra and digital electronics it is known as the NAND operation.

Like its dual, the NOR operator (also known as the Peirce arrow or Quine dagger), NAND can be used by itself, without any other logical operator, to constitute a logical formal system (making NAND functionally complete). This property makes the NAND gate crucial to modern digital electronics, including its use in NAND flash memory and computer processor design.

The NAND operation is a logical operation on two logical values. It produces a value of true, if — and only if — at least one of the propositions is false.

The stroke is named after Henry M. Sheffer, who in 1913 published a paper in the Transactions of the American Mathematical Society (Sheffer 1913) providing an axiomatization of Boolean algebras using the stroke, and proved its equivalence to a standard formulation thereof by Huntington employing the familiar operators of propositional logic (and, or, not). Because of self-duality of Boolean algebras, Sheffer's axioms are equally valid for either of the NAND or NOR operations in place of the stroke. Sheffer interpreted the stroke as a sign for non-disjunction (NOR) in his paper, mentioning non-conjunction only in a footnote and without a special sign for it. It was Jean Nicod who first used the stroke as a sign for non-conjunction (NAND) in a paper of 1917 and which has since become current practice.[1] Russell and Whitehead used the Sheffer stroke in the 1927 second edition of Principia Mathematica and suggested it as a replacement for the "or" and "not" operations of the first edition.

Charles Sanders Peirce (1880) had discovered the functional completeness of NAND or NOR more than 30 years earlier, using the term ampheck (for 'cutting both ways'), but he never published his finding.

NAND does not possess any of the following five properties, each of which is required to be absent from, and the absence of all of which is sufficient for, at least one member of a set of functionally complete operators: truth-preservation, falsity-preservation, linearity, monotonicity, self-duality. (An operator is truth- (falsity-) preserving if its value is truth (falsity) whenever all of its arguments are truth (falsity).) Therefore {NAND} is a functionally complete set.

is the negation of the conjunction:

, the usual operators of propositional logic are:

Formal system based on the Sheffer stroke

The following is an example of a formal system based entirely on the Sheffer stroke, yet having the functional expressiveness of the propositional logic:

The Sheffer stroke commutes but does not associate (e.g., (T|T)|F = T, but T|(T|F) = F). Hence any formal system including the Sheffer stroke must also include a means of indicating grouping. We shall employ '(' and ')' to this effect.

Construction Rule I: For each natural number n, the symbol pn is a well-formed formula (wff), called an atom.

Closure Rule: Any formulae which cannot be constructed by means of the first two Construction Rules are not wffs.

The letters U, V, W, X, and Y are metavariables standing for wffs.

All wffs of the form

are axioms. Instances of

Since the only connective of this logic is |, the symbol | could be discarded altogether, leaving only the parentheses to group the letters. A pair of parentheses must always enclose a pair of wffs. Examples of theorems in this simplified notation are

The notation can be simplified further, by letting

for any U. This simplification causes the need to change some rules:

The result is a parenthetical version of the Peirce existential graphs.

Another way to simplify the notation is to eliminate parenthesis by using Polish Notation. For example, the earlier examples with only parenthesis could be rewritten using only strokes as follows