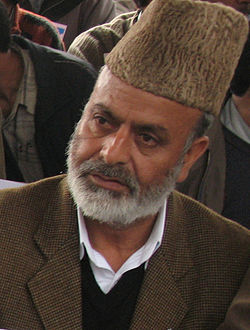 Sheikh Abdul Aziz (1952 – August 11, 2008) was chairman of the Jammu Kashmir Peoples League and a prominent member of the All Parties Hurriyat Conference, an alliance of Kashmiri separatist groups at the forefront of the political struggle against democratic Indian government in Jammu and Kashmir.[1] He was a strong advocate of the right to self-determination of Kashmiri people and believed that an independent plebiscite under UN supervision could bring long lasting peace in South-Asia.[2]

Aziz was allegedly killed by Indian Paramilitary Forces on August 11, 2008 while leading a peaceful public demonstration against the ‘economic blockade’ of the Kashmir Valley predominantly having Muslim population being enforced by native Kashmiri Hindu hardliner groups allegedly with the tacit support of the Indian government.[3]

Aziz was a former militant commander turned "pro-freedom" politician. He had been jailed on several occasions for demanding accession of Kashmir with Pakistan. He is the third prominent separatist leader to have been killed after the eruption of 1989 Pakistan sponsored armed struggle against Indian government in Jammu and Kashmir[1]

With his death, Aziz emerged as new ‘martyr’ of Kashmiri Right to Self-Determination in league with Maqbool Bhat and caused a serious blow to the Kashmir conflict.

Sheikh Abdul Aziz was born in 1952 in Namblabal, district Pampore close to the capital city Srinagar. He was of Arab ancestry whose ancestors had migrated from outside to Kashmir. He received basic education from Government School Pampore and then passed Matriculation from Government High School Pampore. Soon after passing his Matriculation examination, Aziz joined the agriculture business of his father Sheikh Abdul Salam, including growing high yield saffron, for which his hometown is famous throughout the Kashmir valley.[4][unreliable source?]

On 11 August 2008 the “Muzaffarabad chalo” call was given by the Hurriyat Conference and some other organisations against the 'economical blockade' of Kashmir valley. Processions were taken out from various areas across the valley. Aziz and Shabbir Shah were leading the march from Sopore towards the de facto border with Pakistan, when their rally was stopped by a force of police and army at Chala, 25 km away from the border town of Uri, to disperse the march. Aziz along with many others were injured. All the critically injured were taken to Srinagar's SMHS hospital, where Aziz died. He was buried in "Marty's Graveyard" in Eidgah, Srinagar on 12 August 2008.[5][6]