The Shepherd of Hermas

From Infogalactic: the planetary knowledge core
(Redirected from Shepherd of Hermas)
Jump to: navigation, search 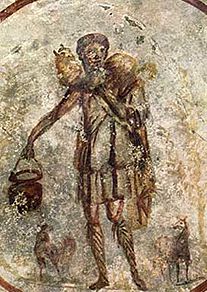 The Shepherd of Hermas, or the Good Shepherd, 3rd century, Catacombs of Rome.

The Shepherd of Hermas (Greek: Ποιμὴν τοῦ Ἑρμᾶ, Poimēn tou Herma; sometimes just called The Shepherd) is a Christian literary work of the late 1st or mid-2nd century, considered a valuable book by many Christians, and considered canonical scripture by some of the early Church fathers such as Irenaeus.[1][2] The Shepherd was very popular amongst Christians in the 2nd and 3rd centuries.[3] It was bound as part of the New Testament in the Codex Sinaiticus,[1][4] and it was listed between the Acts of the Apostles and the Acts of Paul in the stichometrical list of the Codex Claromontanus.

The work comprises five visions, twelve mandates, and ten parables. It relies on allegory and pays special attention to the Church, calling the faithful to repent of the sins that have harmed it.

The shepherd is one of the meanings that was probably attached to some figurines of the Good Shepherd as well as a symbol for Christ, or a traditional pagan kriophoros.

The book consists of five visions granted to Hermas, a former slave. This is followed by twelve mandates or commandments, and ten similitudes, or parables. It commences abruptly in the first person: "He who brought me up sold me to a certain Rhoda, who was at Rome. After many years I met her again, and began to love her as a sister." As Hermas was on the road to Cumae, he had a vision of Rhoda. She told him that she was his accuser in heaven, on account of an unchaste thought the (married) narrator had once had concerning her, though only in passing. He was to pray for forgiveness for himself and all his house. He is consoled by a vision of the Church in the form of an aged woman, weak and helpless from the sins of the faithful, who tells him to do penance and to correct the sins of his children. Subsequently he sees her made younger through penance, yet wrinkled and with white hair; then again, as quite young but still with white hair; and lastly, she shows herself as glorious as a Bride.

This allegorical language continues through the other parts of the work. In the second vision she gives Hermas a book, which she afterwards takes back in order to add to it. The fifth vision, which is represented as taking place 20 days after the fourth, introduces "the Angel of repentance" in the guise of a shepherd, from whom the whole work takes its name. He delivers to Hermas a series of precepts (mandata, entolai), which form an interesting development of early Christian ethics. One point which deserves special mention[citation needed] is the assertion of a husband's obligation to take back an adulterous wife on her repentance. The eleventh mandate, on humility, is concerned with false prophets who desire to occupy the first seats (that is to say, among the presbyters). Some have seen here a reference to Marcion, who came to Rome c. 140 and desired to be admitted among the priests (or possibly even to become bishop of Rome).

After the mandates come ten similitudes (parabolai) in the form of visions, which are explained by the angel. The longest of these (Similitude 9) is an elaboration of the parable of the building of a tower, which had formed the matter of the third vision. The tower is the Church, and the stones of which it is built are the faithful. But in the third vision it looked as though only the holy are a part of the Church; in Similitude 9 it is clearly pointed out that all the baptized are included, though they may be cast out for grave sins, and can be readmitted only after penance.

In spite of the grave subjects, the book is written in a very optimistic and hopeful tone, like most early Christian works.

In parable 5, the author mentions a Son of God, as a virtuous man filled with a Holy "pre-existent spirit" and adopted as the Son.[7] In the 2nd century, adoptionism (the view that Jesus Christ was at least initially, only a mortal man) was one of two competing doctrines about Jesus' true nature, the other being that he pre-existed as a divine spirit (Logos); Christ's identity with the Logos (Jn 1:1) was affirmed in 325 at the First Council of Nicaea.[8] Bogdan G. Bucur, however, notes how widely accepted the Shepherd of Hermas was among "orthodox" Christians, yet was never criticized for apparently exhibiting an adoptionistic Christology. He suggests that the passage in question should be understood as Jesus making his dwelling within those who submit to his spirit, so that the "adoption" that takes place is not of Jesus but of his followers.[9]

Textual criticism, the nature of the theology, and the author's apparent familiarity with the Book of Revelation and other Johannine texts, are thought to set the date of composition in the 2nd century. However, several ancient witnesses support an early dating and there is internal evidence for the place and date of this work in the language and theology of the work. The reference to an unknown Clement is presumed by some to be Clement of Rome; if this is that Clement, it would suggest a date c. 90 for at least the historicised setting of the first two visions. Since Paul sent greetings to a Hermas, a Christian of Rome (Romans 16:14), a minority have followed Origen of Alexandria's opinion that he was the author of this religious allegory.[10]

Three ancient witnesses, one of whom claims to be contemporary, declare that Hermas was the brother of Pope Pius I, whose pontificate was not earlier than 140–155, which corresponds to the date range offered by J. B. Lightfoot (Lightfoot 1891). These authorities may be citing the same source, perhaps Hegesippus,[11] whose lost history of the early Church provided material for Eusebius of Caesarea. The witnesses are the following:

But Hermas wrote The Shepherd very recently, in our times, in the city of Rome, while bishop Pius, his brother, was occupying the chair of the church of the city of Rome. And therefore it ought indeed to be read; but it cannot be read publicly to the people in church either among the Prophets, whose number is complete,[13] or among the Apostles, for it is after their time.

The scholar John A. T. Robinson [14] makes a detailed argument that in fact Shepherd was written before AD 85. This is because

a) Robinson believes that all the canonical New Testament books predate the fall of Jerusalem in AD.70.
b) Irenaeus quotes it as scripture in "Against Heresy" (c. 180) thus undermining the testimony of the Muratorian fragment, which, if believed, would place it during the bishopric in Rome of Pius (140–155). Robinson believes that Irenaeus would not count a 2nd-century text as scripture.
c) Tertullian, in De Pudicitia (c. 215) strongly disparages Hermas, but without mentioning the late composition which would have fatally undermined its canonicity.
d) Origen freely cites Hermas as scripture, and in his Commentary on Romans attributes it to the Hermas of Rom.16:14 (an identification supported by Coleborne [15]).
e) Robinson believes that the internal evidence of Vision 2.4.2 refers to Clement, apparently before he became Bishop of Rome, for which Robinson cites in support G. Edmundson's Bampton lectures of 1913.[16] Edmundson dates Hermas c. 90 on the basis that Clement became Bishop of Rome in 92. Robinson states that there is no reason to suppose that this reference is a pseudonymous fiction.
f) Robinson discounts the testimony of the Muratonian fragment,[14] saying that for no other book should its unsupported evidence be taken seriously, and it is full of palpable mistakes.

The Shepherd makes many allusions to the Old Testament.[citation needed] According to Henry Barclay Swete, Hermas never cites the Septuagint, but he uses a translation of Daniel akin to the one made by Theodotion.[citation needed] He shows acquaintance with one or another of the Synoptic Gospels, and, since he also uses the Gospel of John, he probably knew all four.[citation needed] He appears to employ Ephesians and other Epistles, including perhaps 1 Peter and Hebrews. But the books he most certainly and most often uses are the Epistle of James and the Book of Revelation.[citation needed]

Remarks of Tertullian and Clement of Alexandria give a sense of resistance to the Shepherd among its hearers, and of a sense of controversy about it. Tertullian implies that Pope Callixtus I had quoted it as an authority (though evidently not as one of the books of the Bible), for he replies: "I would admit your argument, if the writing of the Shepherd had deserved to be included in the Divine Instrument, and if it were not judged by every council of the Churches, even of your own Churches, among the apocryphal and false." And again, he says that the Epistle of Barnabas is "more received among the Churches than that apocryphal Shepherd" (De pudicitia, 10 and 20). Though Clement of Alexandria constantly quotes with reverence a work that seems to him to be very useful, and inspired; yet he repeatedly apologizes, when he has occasion to quote it, on the ground that "many people despise it". Two controversies divided the mid-century Roman Christian communities. One was Montanism, the ecstatic inspired outpourings of continuing pentecostal revelations, such as the visions recorded in the Shepherd may have appeared to encourage. The other was Docetism that taught that the Christ had existed since the beginning and the corporeal reality of Jesus the man was simply an apparition.[citation needed]

Cyprian makes no reference to this work, so it would seem to have gone out of use in Africa during the early decades of the 3rd century. Somewhat later it is quoted by the author of the pseudo-Cyprianic tract Adversus aleatores as "Scriptura divina", but in Jerome's day it was "almost unknown to the Latins". Curiously, it went out of fashion in the East, so that the Greek manuscripts of it are but two in number; whereas in the West it became better known and was frequently copied in the Middle Ages.[citation needed]