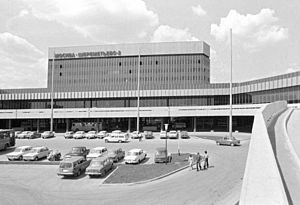 Sheremetyevo's Terminal F was built for the 1980 Moscow Olympics.

Sheremetyevo was opened on 11 August 1959; the first international flight took place on 1 June 1960 to Berlin Schönefeld Airport. The new airport received its name for two nearby venues: the village of Sheremetyevsky and the Savelov station on the railway of the same name. Sheremetyevo-1 (used by domestic flights) was opened on 3 September 1964. On 12 September 1967, the first scheduled passenger flight of the Tupolev Tu-134 departed from Sheremetyevo (to Stockholm), followed by the first scheduled flight of the Ilyushin Il-62 (to Montreal) on 15 September. Sheremetyevo-2, the larger of the two terminal complexes, opened on 1 January 1980 for the 1980 Summer Olympics. It was built according to the principles of design of Hannover-Langenhagen Airport, and was the arrival and departure point for international flights. Flights to cities in Russia and charter flights arrived and departed from Sheremetyevo-1. There is no physical connection between the two terminal complexes; they are essentially separate airports that use the same set of runways. Pulkovo Airport in Saint Petersburg; Minneapolis-Saint Paul International Airport in Minneapolis-Saint Paul, Minnesota; Sydney Airport in New South Wales, Australia; Perth Airport in Western Australia; Ferihegy in Budapest; and Ninoy Aquino International Airport in Manila, Philippines are other examples. In the 2000s, Sheremetyevo saw growing competition from a newer and more comfortable Domodedovo International Airport. With major airlines leaving Sheremetyevo (most notably, Lufthansa, El Al, British Airways, Iberia, Japan Airlines, Brussels Airlines, Austrian Airlines, and Swiss International Air Lines), the need for reconstruction had become evermore evident.[citation needed]

Since 3 July 2010, a walkway opened between Terminals D, E, F, and the Aeroexpress railway terminal on the public access side.[2] Since 2 November 2010, a walkway opened between Terminals D, E, and F on the security side.[3] Both of these simplify transfer between transit flights. After the reconstruction, the southern complex of the airport (terminals D, E and F) will be able to receive up to 25 million passengers annually. Ultimately, after the northern part of the airport is reconstructed, the airport will have the capacity to receive 40 million passengers annually.[4] Since December 25, 2009, all terminals have been identified by letters (Latin characters) as opposed to numbers. In December 2011, a new Area control center (ACC) was opened. It consolidates the gathering, monitoring, and control of the airport's different control centres across all of the organizations that have an impact on its efficient operation.[5] The Situational Center also forms part of the airport control center. SC is intended for joint work of top-managers, heads of state bodies, and partners of Sheremetyevo. It is activated only in the case of an emergency.[6]

A 20-year master plan (until 2025) that includes the incorporation of Terminal 3, the construction of a third runway, and the phased expansion of the airport, was developed in September 2008. The master plan aims to create a strategy for long-term land development. The Ministry of Transport has granted approximately $2bn from the Federal budget and $1bn from non-budgetary funds for the upgrade project. The contract to prepare the airport master plan was awarded to Scott Wilson Group.[7] Additionally, the airport's two runways are set for major reconstruction, including widening and resurfacing. The Moscow Oblast government has reserved adjacent land for a future third runway.

Sheremetyevo International Airport has four operating passenger terminals and one special terminal reserved for the use of private and business aviation. The airport's terminals are divided into two groups based on geographical location: the north and south terminal areas. The two terminal areas are linked by regular internal and external bus services. 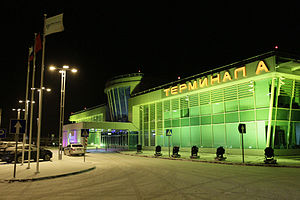 Opened in 2012 to the east of Terminal B, Terminal A is used for the servicing of business and private aviation. Twenty-two remote stands, which previously made up the 'Western Sector' of Terminal B, now belong to Terminal A.

Terminal B, previously Sheremetyevo-1, catered mainly to internal low-cost flights.[4] The terminal has 64 remote aircraft stands, including 8 stands used for the maintenance of Aeroflot aircraft, and five in the 'Eastern Sector' which are used to service cargo flights. Located in the northern part of the airport, the terminal was put into operation in 1964. Is divided into two buildings: the arrival hall zone and departures area. Terminal B is remarkable for its architecturally unique and unusual spaceship-like gate area, which is connected to the main building by a passenger footbridge. The terminal's design was masterminded by a project team working under the guidance of architects and G Elkin Yu Kryukov. The terminal was demolished in August 2015. 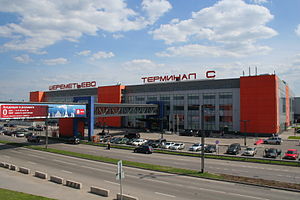 Terminal C cost an estimated US$87.7 million to construct. It has 40,000 m2 (430,000 sq ft) of floorspace and has a capacity of 5 million passengers per year. The terminal now tends to handle flights of CIS carriers and charter airlines. On March 12, 2007, Sheremetyevo opened its first entirely new-build terminal for the servicing of international flights. Located in the northern part of the airport and adjacent to Terminal B, it has 30 check-in counters, 36 passport control booths, a three-level automatic baggage sorting system, and six air bridges. Terminal C is connected by way of an elevated pedestrian gallery with a multistory parking facility for 1,000 vehicles. In autumn 2008, an orthodox chapel (of Archangel Michael and the other Bodiless) was opened on the terminal's third (departures) floor. 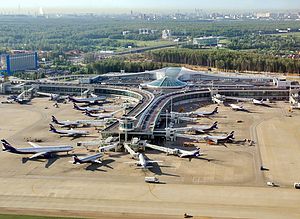 Terminal D, opened in November 2009, is adjacent to Terminal F. The 172,000 m2 (1,850,000 sq ft) building is a hub for Aeroflot and its SkyTeam partners, with capacity for 12 million passengers per year.[8] Aeroflot had been trying to implement the project of a new terminal (Sheremetyevo-3) since January 2001. However, construction only began in 2005, with commissioning of the complex finally taking place on 15 November 2009. The acquisition of its own terminal was a condition of Aeroflot's entry into the SkyTeam airline alliance, thus necessitating the construction. The main contractor for the build was a Turkish company - Enka. Terminal D has 22 jetways and 11 remote stands. On November 15, 2009 at 9:15 a.m., the first flight from Terminal D (the new official name of Sheremetyevo-3) departed for the southern resort city of Sochi. Despite this, Aeroflot took a number of months (due to unexpected administrative delays) to transfer all of its international flights from Terminal F to D (a full transfer was originally planned for February 2010).[9] Whilst previously Terminal D had remained a separate legal entity from the rest of Sheremetyevo Airport, in spring 2012, it became an integrated unit of "Sheremetyevo International Airport" JSC. As part of the deal, Aeroflot, VEB Bank, and VTB Bank, all of which had invested in the construction of Terminal D, became part shareholders in the airport as a whole. The basis for the architectural and artistic image of Terminal D is that of a giant swan with outstretched wings. 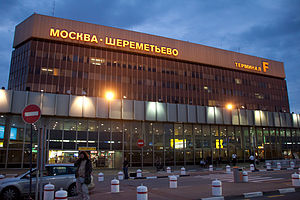 Terminal E[10] opened in 2010 as a capacity expansion project, connecting terminals D and F. The terminal's construction has allowed for the development of terminals D and F, as well as the railway station, into a single south terminal complex. The terminals of this complex are connected by a number of pedestrian walkways with travelators, thus allowing for passengers to move freely between its constituent facilities. In December 2010, a new chapel dedicated to St. Nicholas opened on the second floor of Terminal E. The terminal is used for international flights, primarily by Aeroflot and its SkyTeam partners. Terminal E has 8 jetway equipped gates. The V-Express Transit Hotel between security/passport check-ins provides short-term accommodations for passengers changing planes without having to present a visa for entering Russia. The hotel drew international attention in June 2013 when Edward Snowden checked into the hotel while seeking asylum.[11]

Opened on May 6, 1980 for the Moscow Summer Olympics, Terminal F, previously Sheremetyevo-2, has 15 jetways and 21 remote aircraft stands. The terminal was designed to service 6 million passengers per year. Until the completion of Terminal C, it was Sheremetyevo's only terminal that was capable of adequately servicing international flights. The design is a larger version of the one of Hannover-Langenhagen Airport by the same architects. A major reconstruction of the terminal and its interior space was completed by late 2009. For the convenience of passengers, the departures lounge and Duty Free zone were thoroughly modernised, whilst a number of partition walls were removed to create extra retail and lounge space. 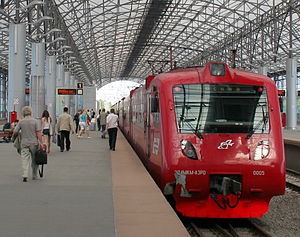 In November 2004, an express train connection was established from the Savyolovsky station to the Lobnya station, which is 7 km (4.3 mi) from the airport, with the remainder of the journey taken by bus or taxi. On 10 June 2008, a 60,000 square meter rail terminal opened in front of Terminal F, with direct service from Savyolovsky station. A shuttle bus service ferries passengers to Terminal B and Terminal C.[40] From 28 August 2009, the line was extended to Belorussky station, and by 2015, it is intended that a new central rail terminal will serve all three of Moscow's main airports. As of 2010, the train operates to Belorussky station nonstop, with the service at Savyolovsky eliminated. The rail link is operated by Aeroexpress, a subsidiary of Russian Railways.[41]

The main road leading to the airport—Leningradskoye Highway—has experienced large traffic jams. Since 23 December 2014, a toll road to the airport has been opened. It connects with MKAD near Dmitrovskoe Highway. Now it is possible to reach the airport in five minutes, avoiding traffic jams.[42] Slow buses and faster minivans (fixed price shared taxis, known as marshrutkas) connect Sheremetyevo with Moscow's extensive metro network. Official airport taxis are available from taxi counters in arrivals. Prices to the city are fixed based on zones. A shuttle bus connects the northern cluster (Terminals B and C) with the south cluster (Terminals D, E, and F).