The Sherwood Foresters (Nottinghamshire and Derbyshire Regiment) was a line infantry regiment of the British Army in existence for just under 90 years, from 1881 to 1970. The regiment was formed on 1 July 1881 as part of the Childers Reforms. The 45th (Nottinghamshire) Regiment of Foot (raised in 1741) and the 95th (Derbyshire) Regiment of Foot (raised in 1823) were redesignated as the 1st and 2nd battalions of the Sherwood Foresters (Derbyshire Regiment).[1] The Derbyshire and Royal Sherwood Foresters Militias (militia and rifle volunteers) became the 3rd (Reserve) and 4th (Extra Reserve) battalions respectively. These were joined by the 1st and 2nd (Derbyshire) and the 3rd (Robin Hood) and 4th (Nottinghamshire) Volunteer battalions. The Headquarters of the Regimental District was established at Derby.

Following the amalgamation, the Sherwood Foresters saw action in Egypt in 1882 and in South Africa during the Boer War. 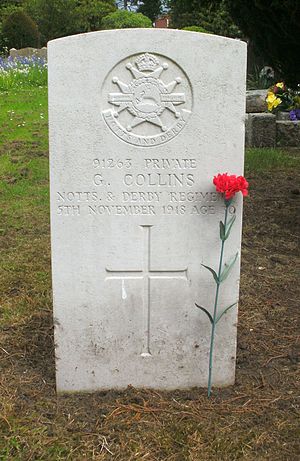 Memorial for G Collins of the Sherwood Foresters, giving the full title of the regiment

During the Great War, the Sherwood Foresters had 33 battalions in service, of which 20 served overseas: mainly on the Western Front, but also in Gallipoli, Italy and the Middle East. Over 140,000 men served in the regiment, which lost 11,400 killed. The regiment won 57 battle honours and 2,000 decorations, including nine Victoria Crosses. Officers and men from the 12th (Service) Battalion produced the Wipers Times.

During the 1916 Easter Rising in Ireland, the Sherwood Foresters took part in the Battle of Mount Street Bridge in Dublin, where they suffered heavy losses against a small handful of Irish volunteers.

After garrison service in the interwar years, the Sherwood Foresters next saw action in the Second World War. The regiment served in the Norwegian Campaign, the Battle of France, Dunkirk, the North African and the Italian campaigns. They also saw action in the Far East. Nearly 27,000 men served in the regiment's 17 battalions, suffering officers and men 1,500 killed in action. The regiment won 10 battle honours and 400 decorations, including a Victoria Cross. Other battalions saw service in Italy and North Africa.[3]

The 1st Battalion was serving in the Middle Eastern theatre and fought in the North African Campaign and the Western Desert Campaign on the outbreak of war, and was assigned to many different brigades and divisions until late June 1942 when, fighting in Tobruk, the battalion was captured. The few survivors of the battalion returned to the United Kingdom. In September the 1st Battalion was reformed, by the redesignation of the 16th Battalion, a hostilities-only battalion.[4]

The 2nd Battalion, Sherwood Foresters was serving in the 3rd Infantry Brigade, part of 1st Infantry Division with which the battalion would remain with throughout the war. The division was sent to France in September 1939 shortly after the outbreak of the war, joining the British Expeditionary Force (BEF). The battalion remained in France until May 1940 when the Germans invaded the Low Countries. They took part in the short but bitter fighting and were forced to be evacuated at Dunkirk as the BEF was in danger of being surrounded and overrun. They were evacuated to England and spent the next two years on home defence and in preparation for a German invasion which never arrived. In early 1943 the division was sent to North Africa where it became part of the British First Army and took part in the final stages of Tunisian Campaign. In January 1944 they took part in the landings at Anzio, under command of U.S. Fifth Army, where they suffered extremely heavy casualties in some of the fiercest fighting of the Italian Campaign so far, and later fighting during Operation Diadem and on the Gothic Line. They fought in Italy until January 1945 when they were sent to Palestine and remained there until the end of the war.[5]

The 1/5th (Derbyshire) Battalion was a 1st-Line Territorial Army formation originally serving with the 148th Infantry Brigade, part of the 49th (West Riding) Infantry Division. However, in December 1939, the battalion was reassigned to the 25th Infantry Brigade and saw service with the BEF in France and Belgium in 1940 and being evacuated at Dunkirk. In late 1940 it was again reassigned to the 55th Infantry Brigade, 18th Infantry Division. The battalion, along with the rest of the 18th Division, was posted to Malaya to defend the peninsula and the island of Singapore against the Japanese. After Singapore fell to the Imperial Japanese Army, the battalion's men were among the thousands of Prisoners of war sent to work on the infamous Burma Railway.[3]

The 8th (Nottinghamshire) Battalion was mobilised in the 148th Infantry Brigade alongside the 1/5th Battalion on the outbreak of war, attached to the 49th (West Riding) Division. It fought in Norway in 1940, and then served as a garrison in Scotland and Northern Ireland. In 1942, the brigade was reorganised as a Training brigade.[10]

The 2/5th (Derbyshire) Battalion was formed a 2nd-Line duplicate of the 1/5th Battalion, raised in 1939 when the Territorial Army was doubled in size. It was renamed the 5th Battalion after the loss of the 1/5th in Malaya in February 1942. It served in the 139th Infantry Brigade, part of the 46th (West Riding) Infantry Division, in France (see 9th Battalion), Tunisia, Italy and Greece.[1][11]

On the outbreak of the Second World War, the 9th Battalion was in the process of formation as a duplicate of the 8th Battalion. Based at Bulwell near Nottingham, the battalion was commanded by Claude Lancaster, MP, a former officer in the Royal Horse Guards.[12] The battalion was assigned to the 139th Infantry Brigade, alongside the 2/5th (Derbyshire) Battalion, of the 46th Infantry Division, which, like several other '2nd Line' Territorial divisions, went to join the British Expeditionary Force in France for training and labour duties in April 1940.[13] However, when the German Army attacked and broke through the following month, 46th Division was sent into action. On 29 May, 139 Bde joined 'Macforce' holding the canal line near Carvin. As the 'pocket' shrank towards Dunkirk, 46th Division was ordered inside the perimeter on 27 May. On 29 May, 9th Foresters were sent to reinforce the garrison at the fortified town of Bergues, 9 km south of Dunkirk.[14] The Germans were unable to enter Bergues until 2 June, and 9th Foresters was one of the last units to leave Dunkirk and be evacuated from France.[15]

The 9th Battalion left 46th Division in December 1940, and shortly afterwards became the lorried infantry element alongside the artillery of 1st Support Group in 1st Armoured Division.[16] However, on 1 November 1941, the battalion was converted to the armoured car role as 112th Regiment Royal Armoured Corps. In common with other infantry units transferred to the Royal Armoured Corps, personnel would have continued to wear their Foresters cap badge on the black beret of the Royal Armoured Corps,[17] and the regiment continued to add the parenthesis '(Foresters)' after the RAC title.[18] Lieutenant-Colonel Lancaster remained in command during this period before returning to the House of Commons.[15]

112 RAC was assigned to the 42nd Armoured Division as its armoured car regiment. It left the division in February 1943[19] and later became a draft-finding unit for other armoured car regiments fighting in the Normandy Campaign. 112 RAC ceased to exist on 14 October 1944, when it reverted to the title of 9th Foresters, which was placed in suspended animation.[20] The last entry in the War Diary notes:

The history of this Regiment is a pure example of the complete inefficiency of 'A' Branch at the War Office, in as much as many hundreds of officers and men have wasted valuable years of their lives training for precisely nothing.[21]

The 10th (Home Defence) Battalion was raised for home defence in 1939 and, like most other home service units, would mainly have had consisted of men with military experience who were too old or medically unfit for active service overseas, or from younger soldiers who themselves were not old enough to be conscripted (the age for conscription being 20 at the time). The battalion was disbanded in 1941.[1]

The 11th Battalion was a hostilities-only unit raised in 1940.

The 12th Battalion was a hostilities-only unit raised in 1940.[1] In 1942, it was sent to India, where it carried out internal security duties at Delhi. On 1 January 1944, it moved to Delawari and came under the command of the 52nd Infantry Brigade, whose role was training British infantrymen in jungle warfare.[22]

The 14th Battalion was a hostilities-only unit raised in 1940[26] that went on to see active service in the Middle East (Egypt, Palestine, Syria, Lebanon, Iraq) and Italy. It was first assigned to the 218th Independent Infantry Brigade (Home), formed for Home Service in the Yorkshire Area, but was soon reassigned to be the lorried infantry[27] component alongside the artillery of 8th Support Group in the newly raised 8th Armoured Division. In 1942, the division went round by sea to Suez, but, on arrival in July, it was broken up and 14th Foresters were sent to join the 9th Independent Armoured Brigade, with which it fought at the Second Battle of El Alamein under the command of 2nd New Zealand Division.[28]

In January 1943, the 14th Foresters went to join the 7th Armoured Brigade refitting in Persia and Iraq Command. In the summer of 1943, the battalion returned to North Africa to join the 18th Infantry Brigade in the 1st Armoured Division. In February 1944, the brigade sailed to Italy and took part in the Anzio campaign (February–May 1944) under the command of the 1st Infantry Division. In August, the brigade returned to the 1st Armoured Division and was engaged in the operations at Coriano in September. By now, the brigade's infantry battalions were badly depleted and, due to the lack of replacements in the Mediterranean, the 14th Foresters was reduced to a cadre and transferred to the non-operational 168th (London) Infantry Brigade, before being disbanded.[29]

In 1940, the 70th (Young Soldiers) Battalion was stationed at Holme Pierrepont Hall, near Radcliffe-on-Trent, Nottingham. Like all other Young Soldiers battalions, this was formed to take volunteers around the ages of 18 and 19 who had not yet reached the compulsory age of conscription, which was 20 at the time. In September 1942, the 70th was redesignated as the 16th Battalion.[30] On 1 January 1943 the 16th Battalion was redesignated as the 1st Battalion which was lost in the Battle of Gazala in the Western Desert. The new 1st Battalion was transferred to the 162nd Infantry Brigade and later the 222nd Infantry Brigade. In late 1944 the 1st Battalion was transferred to the 183rd Infantry Brigade, part of the 61st (South Midland) Infantry Division and remained with it for the rest of the war and was preparing for a move to the Far East to fight the Imperial Japanese Army in the Burma Campaign in July 1945 but the Japanese surrendered and the move was cancelled.

In the postwar period, the Sherwood Foresters served in Germany, initially as part of the occupation forces and later in the BAOR. In 1958, the regiment saw action in Malaya and, in 1963, in Cyprus. 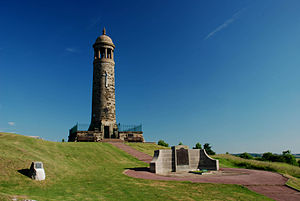 A Memorial Tower for those of the regiment who died in battle, was erected in 1923 at the summit of Crich Hill in Derbyshire.

Built on the site of an older tower called Crich Stand, the Memorial Tower is the destination of an annual pilgrimage on the first Sunday in July. It is 1,000 feet (300 m) above sea level, and has 52 steps to the top. From there eight counties can be seen, including landmarks such as the Humber Bridge and Lincoln Cathedral.[31]

The Sherwood Foresters' cap badge, stable belt[32] and identity are continued on (charged with a thin silver line to distinguish between the (foster) parent unit and the OTC) by the East Midlands Universities Officer Training Corps (EMU OTC), a unit affiliated with 2nd Battalion, Mercian Regiment and thus linked to the lineage of the Sherwood Foresters.

The regimental colours of 2nd Battalion, Sherwood Foresters are framed and mounted in EMU OTC's mess.

The following members of the regiment were awarded the Victoria Cross: