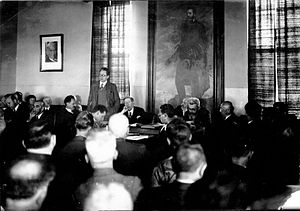 Shmaryahu Levin (Russian: Шмарьяху Левин; born 1867 in Svislach, Minsk Governorate; died 9 June 1935, Haifa), was a Jewish Zionist activist in the Russian Empire, then in Germany and in the United States, member of the first elected Russian Parliament for the Constitutional Democratic Party in 1906.

He was elected to the 1906 First Duma. Levin left Russia for Germany immediately after the dispersal of the First Duma, then emigrated to America. Since 1908 he began advocating for the creation of the Haifa Technion.

Kfar Shmaryahu, an affluent Tel Aviv suburb, is named for him.