From Infogalactic: the planetary knowledge core
Jump to: navigation, search
This article is about the writer. For the greeting, see Shalom aleichem. For the Jewish hymn, see Shalom Aleichem (liturgy). For the crater on Mercury, see Sholem Aleichem (crater). 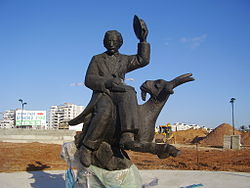 Solomon Naumovich Rabinovich, better known under his pen name Sholem Aleichem (Yiddish and Hebrew: שלום־עליכם‎; Russian and Ukrainian: Шоло́м-Але́йхем) (March 2 [O.S. February 18] 1859 – May 13, 1916), was a leading Yiddish author and playwright. The musical Fiddler on the Roof, based on his stories about Tevye the Dairyman, was the first commercially successful English-language stage production about Jewish life in Eastern Europe. (The Hebrew phrase "Shalom [or Sholem according to dialect] Aleichem" literally means "Peace be upon you", and is a greeting in traditional Hebrew and Yiddish, surviving in attenuated form in the modern Hebrew "Shalom" [Peace], the normal greeting in modern Israel).

Solomon Naumovich (Sholom Nohumovich) Rabinovich (Russian: Соломо́н Нау́мович (Шо́лом Но́хумович) Рабино́вич) was born in 1859 in Pereyaslav and grew up in the nearby shtetl (small town with a large Jewish population) of Voronko, in the Poltava Governorate of the Russian Empire (now in the Kiev Oblast of central Ukraine).[1] His father, Menachem-Nukhem Rabinovich, was a rich merchant at that time.[2] However, a failed business affair plunged the family into poverty and Solomon Rabinovich grew up in reduced circumstances.[2] When he was 13 years old, the family moved back to Pereyaslav, where his mother, Chaye-Esther, died in a cholera epidemic.[3]

Sholem Aleichem's first venture into writing was an alphabetic glossary of the epithets used by his stepmother. At the age of fifteen, inspired by Robinson Crusoe, he composed a Jewish version of the novel. He adopted the pseudonym Sholem Aleichem, a Yiddish variant of the Hebrew expression shalom aleichem, meaning "peace be with you" and typically used as a greeting. In 1876, after graduating from school in Pereyaslav, he spent three years tutoring a wealthy landowner's daughter, Olga (Hodel) Loev (1865 – 1942).[4] From 1880 to 1883 he served as crown rabbi in Lubny.[5] On May 12, 1883, he and Olga married, against the wishes of her father. A few years later, they inherited the estate of Olga's father. In 1890, Sholem Aleichem lost their entire fortune in a stock speculation and fled from his creditors. Solomon and Olga had their first child, a daughter named Ernestina in 1884.[6] (They called her Tissa at home.) Daughter Lyala was born in 1887. A third daughter—Emma—was born in 1888. In 1889, Olga finally gave birth to a son. They named him Elimelech—after Olga’s father—but at home they called him Misha. Marusi—who would one day publish My Father, Sholom Aleichem under her married name Marie Waife-Goldberg—was born in 1892. A final child, a son named Nochum after Solomon’s father—but called Numa at home—was born in 1901. Under the name Norman Raeben (1901-1978), he became a painter and an influential art teacher and their daughter Lyalya (Lili) Kaufman, became a Hebrew writer. Lyalya's daughter Bel Kaufman, also a writer, was the author of Up the Down Staircase, which was also made into a successful film.

After witnessing the pogroms that swept through southern Russia in 1905, Sholem Aleichem left Kiev and resettled to New York City, where he arrived in 1906. His family[clarification needed] set up house in Geneva, Switzerland, but when he saw he could not afford to maintain two households, he joined them in Geneva in 1908. Despite his great popularity, he was forced to take up an exhausting schedule of lecturing to make ends meet. In July 1908, during a reading tour in Russia, Sholem Aleichem collapsed on a train going through Baranowicze. He was diagnosed with a relapse of acute hemorrhagic tuberculosis and spent two months convalescing in the town's hospital. He later described the incident as "meeting his majesty, the Angel of Death, face to face", and claimed it as the catalyst for writing his autobiography, Funem yarid [From the Fair].[1] He thus missed the first Conference for the Yiddish Language, held in 1908 in Czernovitz; his colleague and fellow Yiddish activist Nathan Birnbaum went in his place.[7] Sholem Aleichem spent the next four years living as a semi-invalid. During this period the family was largely supported by donations from friends and admirers.

Sholem Aleichem moved to New York City again with his family in 1914. The family lived in the Lower East Side, Manhattan. His son, Misha, ill with tuberculosis, was not permitted entry under United States immigration laws and remained in Switzerland with his sister Emma. He died there in 1916. 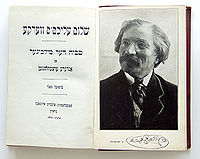 A volume of Sholem Aleichem stories in Yiddish, with the author's portrait and signature

Like his contemporaries Mendele Mocher Sforim and I.L. Peretz, Sholem Rabinovitch started writing in Hebrew, as well as in Russian. In 1883, when he was 24 years old, he published his first Yiddish story, Tsvey Shteyner ("Two Stones"), using for the first time the pseudonym Sholem Aleichem. By 1890 he was a central figure in Yiddish literature, the vernacular language of nearly all literate East European Jews, and produced over forty volumes in Yiddish. It was often derogatorily called "jargon", but Sholem Aleichem used this term in an entirely non-pejorative sense.

Apart from his own literary output, Sholem Aleichem used his personal fortune to encourage other Yiddish writers. In 1888–89, he put out two issues of an almanac, Di Yidishe Folksbibliotek ("The Yiddish Popular Library") which gave important exposure to young Yiddish writers. In 1890, after he lost their entire fortune, he could not afford to print the almanac's third issue, which had been edited but was subsequently never printed. Tevye the Dairyman was first published in 1894. Over the next few years, while continuing to write in Yiddish, he also wrote in Russian for an Odessa newspaper and for Voskhod, the leading Russian Jewish publication of the time, as well as in Hebrew for Ha-melitz, and for an anthology edited by YH Ravnitzky. It was during this period that Sholem Aleichem first contracted tuberculosis.

In August 1904, Sholem Aleichem edited Hilf: a Zaml-Bukh fir Literatur un Kunst ("Help: An Anthology for Literature and Art"; Warsaw, 1904) and himself translated three stories submitted by Tolstoy (Esarhaddon, King of Assyria; Work, Death and Sickness; Three Questions) as well as contributions by other prominent Russian writers, including Chekhov, in aid of the victims of the Kishinev pogrom.

Sholem Aleichem's narratives were notable for the naturalness of his characters' speech and the accuracy of his descriptions of shtetl life. Early critics focused on the cheerfulness of the characters, interpreted as a way of coping with adversity. Later critics saw a tragic side in his writing.[8] He was often referred to as the "Jewish Mark Twain" because of the two authors' similar writing styles and use of pen names. Both authors wrote for both adults and children, and lectured extensively in Europe and the United States. When Twain heard of the writer called "the Jewish Mark Twain", he replied "please tell him that I am the American Sholem Aleichem."[9]

Sholem Aleichem was an impassioned advocate of Yiddish as a national Jewish language, which he felt should be accorded the same status and respect as other modern European languages. He did not stop with what came to be called "Yiddishism", but devoted himself to the cause of Zionism as well. Many of his writings[10] present the Zionist case. In 1888, he became a member of Hovevei Zion. In 1907, he served as an American delegate to the Eighth Zionist Congress held in The Hague.

Sholem Aleichem had a mortal fear of the number 13. His manuscripts never have a page 13; he numbered the thirteenth pages of his manuscripts as 12a.[11] Though it has been written that even his headstone carries the date of his death as "May 12a, 1916",[12] his headstone reads the dates of his birth and death in Hebrew, the 26th of Adar and the 10th of Iyar, respectively. 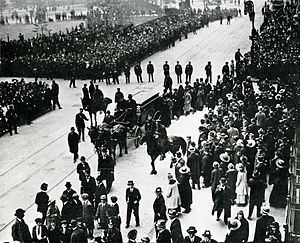 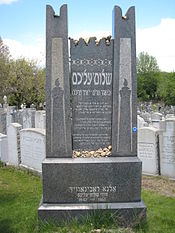 Sholem Aleichem died in New York on May 13, 1916 from tuberculosis and diabetes,[13] aged 57, while working on his last novel, Motl, Peysi the Cantor's Son, and was buried at Old Mount Carmel cemetery in Queens.[14] At the time, his funeral was one of the largest in New York City history, with an estimated 100,000 mourners.[15][16] The next day, his will was printed in the New York Times and was read into the Congressional Record of the United States.

Sholem Aleichem's will contained detailed instructions to family and friends with regard to burial arrangements and marking his yahrtzeit. He told his friends and family to gather, "read my will, and also select one of my stories, one of the very merry ones, and recite it in whatever language is most intelligible to you." "Let my name be recalled with laughter," he added, "or not at all." The celebrations continue to the present-day, and, in recent years, have been held at the Brotherhood Synagogue on Gramercy Park South in New York City, where they are open to the public.[17]

The main street of Birobidzhan is named after Sholem Aleichem;[18] streets were named after him also in other cities in the Soviet Union, among them Kiev, Odessa, Vinnytsya, Lviv, Zhytomyr and Mykolaiv (although this last one is now named after Karl Liebknecht[19]). In New York City in 1996, East 33rd Street between Park and Madison Avenue was renamed "Sholem Aleichem Place". Many streets in Israel are named after him.

An impact crater on the planet Mercury also bears his name.[20]

On March 2, 2009 (150 years after his birth) the National Bank of Ukraine issued an anniversary coin celebrating Aleichem with his face depicted on it.[21]

In Rio de Janeiro, Brazil a library named BIBSA - Biblioteca Sholem Aleichem was founded in 1915 as a Zionist institution but some years later Jews of left-wing assumed the power by regular internal polls, and Sholem Aleichem started to mean Communism in Rio de Janeiro. BIBSA had a very active theatrical program in Yiddish for more than 50 years since its foundation and of course Sholem Aleichem scripts were a must. In 1947 BIBSA evolved in a more complete club named ASA - Associação Sholem Aleichem that exists nowadays in Botafogo neighborhood. Next year, in 1916 same group that created BIBSA, founded a Jewish school named Escola Sholem Aleichem that was closed in 1997. It was Zionist too, and became Communist like BIBSA, but after the 20th Communist Congress in 1956 school supporters and teachers split as a lot of Jews abandoned Communism and founded another school, Colégio Eliezer Steinbarg, still existing as one of the best Jewish schools in Brazil, named after the first director of Sholem Aleichem School, he himself, a Jewish writer born in Romania, that came to Brazil.[23][24]

In the Bronx, New York, a housing complex called The Shalom Aleichem Houses[25] was built by Yiddish speaking immigrants in the 1920s, and was recently restored by new owners to its original grandeur. The Shalom Alecheim Houses are part of a proposed historic district in the area. 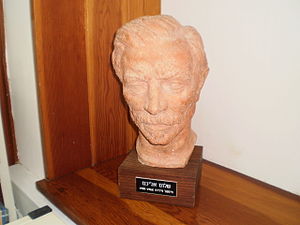