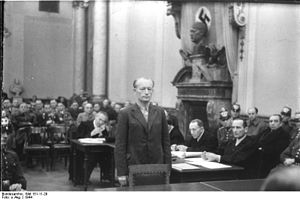 A show trial is a public trial in which the judicial authorities have already determined the guilt of the defendant. The actual trial has as its only goal to present the accusation and the verdict to the public as an impressive example and as a warning to other would-be dissidents or transgressors. Show trials tend to be retributive rather than correctional justice and also conducted for propagandistic purposes. The term was first recorded in the 1930s.[1]

Following the formation of the People's Republic of China in 1949, the Communist Party of China under Mao Zedong began a massive socioeconomic and political campaign called the Great Leap Forward, which lasted circa 1958–1961. During this time, many thousands of people classified as elements of the bourgeois like wealthy landlords were rounded up, given show trials, with some receiving executions.

Between 1 and 2 million landlords were executed as "counterrevolutionaries" in Communist China.[2]

After the Tiananmen Square protests of 1989, show trials were given to "rioters and counter-revolutionaries" involved in the protests and subsequent military massacre.[3]

Chinese writer and dissident Ma Jian argued that Gu Kailai, the wife of purged Communist Chinese leader Bo Xilai, was given a show trial in 2012.[4]

Show trials were a significant part of Joseph Stalin's regime. The Moscow Trials of the Great Purge period (1937–38) in the Soviet Union are characteristic.

The authorities staged the actual trials meticulously. If defendants refused to "cooperate" — i.e., to admit guilt for their alleged and mostly fabricated crimes — they did not go on public trial, but suffered execution nonetheless. This happened, for example during the prosecution of the so-called "Labour Peasant Party" (Трудовая Крестьянская Партия), a party invented by the NKVD, which, in particular, assigned the notable economist Alexander Chayanov to it.

Some solid public evidence of what really happened during the Moscow Trials came to the West through the Dewey Commission (1937). After the collapse of the Soviet Union (1991), more information became available. This discredited the New York Times reporter Walter Duranty, who claimed at the time that these trials were actually fair.

According to declassified Soviet archives, with documents dating to 1937 and 1938, the NKVD arrested more than one and a half million people, of whom 681,692 were executed.[5]

In August 2015 Ukrainian director Oleg Sentsov was sentenced by a Russian military court to 20 years in prison after show trial in Russia’s Rostov-on-Don.[6]

His co-defendant, the activist and anti-fascist Alexander Kolchenko, was sentenced to 10 years. 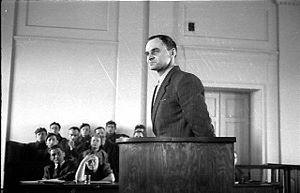 Captain Witold Pilecki, former prisoner at Auschwitz during a show trial made by communist authorities in Poland in 1948
See also: Eastern Bloc politics

Following some dissent within ruling communist parties throughout the Eastern Bloc, especially after the 1948 Tito–Stalin split,[7][8] several party purges occurred, with several hundred thousand members purged in several countries.[7][9] In addition to rank-and-file member purges, prominent communists were purged, with some subjected to public show trials.[9] These were more likely to be instigated, and sometimes orchestrated, by the Kremlin or even Stalin himself, as he had done in the earlier Moscow Trials.[10]

Such high ranking party show trials included those of Koçi Xoxe in Albania and Traicho Kostov in Bulgaria, who were purged and arrested.[8] After Kostov was executed, Bulgarian leaders sent Stalin a telegram thanking him for the help.[10] In Romania, Lucreţiu Pătrăşcanu, Ana Pauker and Vasile Luca were arrested, with Pătrăşcanu being executed.[9]

Stalin's NKVD emissary coordinated with Hungarian General Secretary Mátyás Rákosi and his ÁVH head the way the show trial of Hungarian Foreign Minister László Rajk should go, and he was later executed.[10] The Rajk trials led Moscow to warn Czechoslovakia's parties that enemy agents had penetrated high into party ranks, and when a puzzled Rudolf Slánský and Klement Gottwald inquired what they could do, Stalin's NKVD agents arrived to help prepare subsequent trials.

The Czechoslovak Communist party subsequently arrested Slánský himself, Vladimír Clementis, Ladislav Novomeský and Gustáv Husák (Clementis was later executed).[9] Slánský and eleven others were convicted together of being "Trotskyist-zionist-titoist-bourgeois-nationalist traitors" in one series of show trials, after which they were executed and their ashes were mixed with material being used to fill roads on the outskirts of Prague.[9] By the time of the Slánský trials, the Kremlin had been arguing that Israel, like Yugoslavia, had bitten the Soviet hand that had fed it, and thus the trials took an overtly anti-Semitic tone, with eleven of the fourteen defendants tried with Slánský being Jewish.[11]

The Soviets generally directed show trial methods throughout the Eastern Bloc, including a procedure in which confessions and evidence from leading witnesses could be extracted by any means, including threatening to torture the witnesses’ wives and children.[12] The higher ranking the party member, generally the more harsh the torture that was inflicted upon him.[12] For the show trial of Hungarian Interior Minister János Kádár, who one year earlier had attempted to force a confession of Rajk in his show trial, regarding "Vladimir" the questioner of Kádár:[12]

The evidence was often not just non-existent but absurd, with Hungarian George Paloczi-Horváth’s party interrogators delightedly exclaiming "We knew all the time—we have it here in writing—that you met professor Szentgyörgyi not in Istanbul, but in Constantinople."[11] In another case, the Hungarian ÁVH secret police also condemned another party member as a Nazi accomplice with a document that had actually been previously displayed in glass cabinet of the Institute of the Working Class Movement as an example of a Gestapo forgery.[11] The trials themselves were "shows", with each participant having to learn a script and conduct repeated rehearsals before the performance.[11] In the Slánský trial, when the judge skipped one of the scripted questions, the better-rehearsed Slánský answered the one which should have been asked.[11]

As the end of the 1989 Romanian Revolution neared, First Secretary of the Communist Party Nicolae Ceaușescu and his wife Elena were condemned to death and shot dead by a firing squad after a Stalinist-style trial in a kangaroo court.[13]

Between 1933 and 1945, the Nazi government established a large number of Sondergerichte that were frequently used to prosecute those hostile to the regime. The People's Court (Germany) was a kangaroo court established in 1934 to handle political crimes after several of the defendants at the Reichstag fire Trial were acquitted. Between 1933 and 1945, an estimated 12,000 Germans were killed on the orders of the "special courts" set up by the Nazi regime.[14]