Shura Cherkassky (Russian: Александр (Шура) Исаакович Черкасский; 7 October 1911 – 27 December 1995) was an American[1] classical pianist known for his performances of the romantic repertoire. His playing was characterized by a virtuoso technique and singing piano tone.[2] For much of his later life, Cherkassky resided in Britain.

Alexander Isaakovich Cherkassky (Shura is a diminutive form of Alexander) was born in Odessa, Russian Empire (now in Ukraine) in 1911. Cherkassky's family fled to the United States to escape the Russian Revolution.

Cherkassky's first music lessons were from his mother, Lydia Cherkassky, who once played for Tchaikovsky in St. Petersburg. She also taught the pianist Raymond Lewenthal. In the United States, Cherkassky continued his piano studies at the Curtis Institute of Music under Josef Hofmann. Before studying with Hofmann, however, Cherkassky auditioned for Sergei Rachmaninoff, who advised him to give up performing for at least two years and to change the position of his hands at the keyboard. Conversely, Hofmann suggested Cherkassky should continue giving concerts, and this long association with public performance meant that Cherkassky felt comfortable before an audience. Hofmann also recommended that he practice for four hours every day and Cherkassky did this religiously throughout his life, maintaining an extensive repertoire (baroque to Berio) to an exacting standard. His studies and advisory sessions with Hofmann continued until 1935. In the interim he began his lifelong obsession with world travel with trips to Australia, New Zealand, the Far East, Russia and Europe.

Cherkassky performed actively until the end of his life, and many of his best recordings were made under live concert recital conditions.

In the 1940s Cherkassky moved to California. He appeared at the Hollywood Bowl with conductors such as Sir John Barbirolli and Leopold Stokowski, and he played the sound track (Beethoven's Appassionata Sonata) for the Bette Davis 1946 film Deception. He also played Stravinsky's Three Pieces from Petrushka for the composer, who advised him to use the 'una corda' pedal for certain loud passages in order to obtain a particular special effect. Concert engagements were infrequent for Cherkassky in California during World War II.

In 1946 he married Eugenie Blanc, but divorced two years later. Also in 1946 he had a great success in Hamburg playing Rachmaninoff's Rhapsody on a Theme of Paganini under Hans Schmidt-Isserstedt. This concert resulted in Cherkassky's popularity in Germany and Austria (Salzburg Festival) which lasted until the end of his life and confirmed him as one of the foremost pianists of the day. It was after his Wigmore Hall recital of 27 March 1957 that Cherkassky's career accelerated in the United Kingdom, and, following the death of his mother in Nice in 1961, he settled in London where he lived at The White House Hotel until his death in 1995. 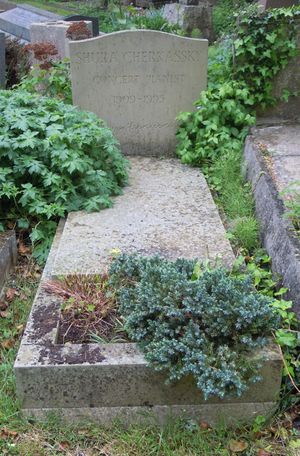 His career continued to flourish with appearances at all the great concert venues of the world: the Concertgebouw in Amsterdam, the Herkulessaal in Munich, the Philharmonie in Berlin, the Musikverein in Vienna, the Théâtre des Champs-Élysées, at Suntory Hall in Tokyo, and also with all the world's great orchestras and conductors. Cherkassky's love of spontaneity and his dislike of a fixed standard performance meant that some conductors were reluctant to work with him. With Cherkassky, there was no guarantee that what was agreed in rehearsal would happen in concert. Cherkassky's performing career lasted for over 70 years, yet it was only in the last few decades of his life that he was recognized as one of the greatest pianists - a re-creative genius who relished spontaneity, beauty of sound and the kaleidoscopic possibilities of the piano.

Cherkassky died in London, aged 84, on 27 December 1995. He is buried in Highgate Cemetery, London, England.

Over seven decades of his concert career, starting in the 1920s, Cherkassky made a large number of recordings for RCA Victor, Vox, Swedish Cupol label, HMV, DG (the famous Tchaikovsky concerto recordings, and a later stereo recording of Liszt's Hungarian Fantasy with the Berlin Philharmonic conducted by Herbert von Karajan), Tudor, Nimbus and Decca ('live' BBC recordings). He made his last recordings at age 83, in May 1995, seven months before his death. These were a selection of Rachmaninov's pieces to act as fillers for his recording of Rachmaninov's Piano Concerto No. 3 made the previous year.