Sibiu (Romanian pronunciation: [siˈbiw]) is a county (județ) of Romania, in the historical region Transylvania, with the capital city Sibiu.

In Hungarian, it is known as Szeben megye, and in German as Kreis Hermannstadt. During Austro-Hungarian administration, from 1876 to 1918, there was a county with similar name (see: Szeben County).

At the 2011 census the county has the following population indices:

Traditionally, the biggest minority in the county were Germans, but their numbers have decreased since World War II and especially the Romanian Revolution of 1989.

The south side of the county, closer to the mountains was mainly inhabited by Romanians (Mărginimea Sibiului), and the north side of the country - the Transylvanian Plateau was inhabited evenly by Germans and Romanians, but most Saxon villages are now deserted. The Roma population, mainly from southern Romania, was placed close to the villages in the Communist period and have since increased their numbers.

In the South side there are the Carpathian Mountains (Southern Carpathians) - Făgăraș Mountains with heights over 2500 m, Lotru and Cindrel which make up to 30% of the county's surface. The Olt River crosses the mountains over to the South of Romania in Sibiu County forming one of the most accessible link between Transylvania and Wallachia. In the North side there is the Transylvanian Plateau.

The most important rivers crossing the county are the Olt in the South with Cibin its main effluent, and the Târnava in the North. 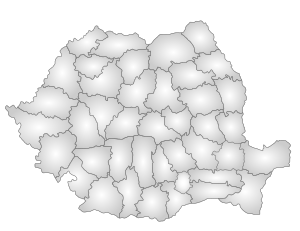 Sibiu County has one of the most dynamic economies in Romania, and is one of the regions with the highest level of foreign investment.

The biggest natural resource in the county is natural gas, especially in the north side, having one of the largest sources in the country.

In Copșa Mică during the communist period there were two chemical industrial complexes which polluted the environment heavily with carbon black, heavy metals, and other chemical substances. That's why the area is still considered one of the most polluted communities in Europe. Fortunately, after 1989 many of the industrial complexes were shut down and the area is slowly recovering.

The regional legislature is the County Council. Its president was Martin Bottesch (Democratic Forum of Germans in Romania), from 2004 to 2012.

The main tourist attractions in the county are: 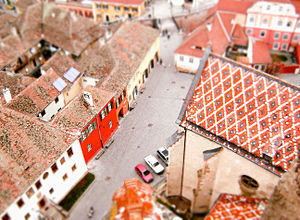 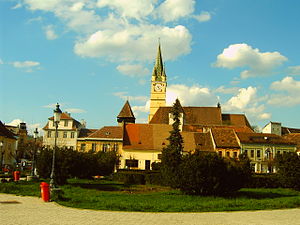