From Infogalactic: the planetary knowledge core
Jump to: navigation, search
For the naval battle at Odessa in 1914, see Battle of Odessa (1914).

The Siege of Odessa also known as the Defence of Odessa was part of the Eastern Front theatre of World War II in 1941. The campaign was fought by the Axis powers of Germany and Romania against the Soviet Union for control of Odessa, a port on the Black Sea. On 22 June 1941 the Axis invaded the Soviet Union during Operation Barbarossa.

It was primarily conducted by the Romanian 4th Army (Armata a 4-a) and elements of the German 11th Army (11. Armee). Due to the heavy resistance of the Soviet 9th Independent Army (initially) and the rapidly formed Separate Coastal Army, which was formed from the Coastal Group of the 9th Army,[5] and the Black Sea Fleet forces in Odessa, it took the Axis forces 73 days of siege and four attempts to take the city, during which they suffered 93,000 casualties, while the Red Army suffered an estimated 41,000 to 60,000 casualties.[4]

Lieutenant-general Nicolae Ciupercă's Fourth Army commenced the advance over the river on 3 August. The 5th Corps, comprising the 15th Infantry Division and 1st Cavalry Brigade, forced the crossing between Tighina and Dubăsari. During the night of 5 August, the 1st Armored Division also joined the 5th Corps. On 8 August, the Romanian General Staff issued the Operative Directive No. 31 stipulating that the 4th Army was to defeat the enemy between the Dniester River and the Tiligulskiy Bank and to occupy Odessa from the move. It was thought that the city garrison, which was heavily outnumbered, would surrender quickly. However, Odessa was a heavily fortified position, which, thanks to the superiority of the Soviet Black Sea Fleet, could not actually be completely surrounded. The defense was organized on three lines with trenches, anti-tank ditches, pillboxes and others. The first line was 80 km long and situated some 25–30 km from the city. The second and main line of defense was situated 6–8 km from the city and was about 30 km long. The third and last line of defense was organized inside the city itself. The forces that initially manned the fortifications were made up of the 25th and 95th Rifle Divisions, the 2nd Cavalry Division, the 421st Rifle Division, the 54th Rifle Regiment and an NKVD Regiment. Overall, the Red Army had some 34,500 men and 240 artillery pieces in the area. Air support was provided by the 69 IAP, two seaplane squadrons and one bomber squadron. Later, other fighters joined the defenders, as did an Il-2 squadron. Bombers from Crimea and Nikolaev also participated in the battle.

The 4th Army planned a combined maneuver: the 3rd Corps (3rd, 7th Infantry and 1st Guard Divisions and the 2nd Tank Regiment) had to undertake a frontal attack on the Razdelnaya – Odessa direction, while the 5th Corps (15th Infantry and 1st Armored Divisions and 1st Cavalry Brigade) executed a turning maneuver to the north, towards Katargy and Bolschaya Buzhalyk, and then turn southwards. The 3rd Reconnaissance Group of the 3rd Infantry Division advanced towards Razdelnaya and reported that the village was burning and the railway station was occupied by Soviets troops. In the evening, the 1st Armored Division and the 1st Cavalry Brigade encircled Katargy and took 200 Soviet POWs. 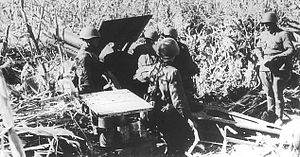 A Soviet gun crew during the siege.

On 9 August, the 4th Dorobanti Regiment defeated the Soviet forces in the Bakalovy area, while the 30th Dorobanţi Regiment took hold of the village of Ponyatovka. The 7th Infantry Division occupied the Razdelnaya railroad station and a plateau south of the station, despite heavy Soviet resistance. The following day, in the sector of the 3rd Corps, the bulk of the 7th Infantry Division reached Elssas, while the 1st Guard Division arrived on the alignment Strassburg – Petra Evdokievka. In the sector of the 5th Corps, the 1st Armored Division advanced fast and defeated the Soviet forces at Bolschaya Buzhalyk, breaking through Odessa's first line of defense. Until the evening, the Romanian division reached the second line of defense, on the alignment Blagodatnaya – Mal. Adzhalyk. The 1st Cavalry Brigade took Severinovka and joined the 1st Armored Division. At the same time, the 10th Dorobanţi Regiment overran the Soviet forces at Lozovaya. The 4th Army gradually closed the circle around Odessa, but the offensive was temporarily stopped by Antonescu on 13 August to strengthen the line west of the Hadjibey bank.

The offensive resumed on 16 August, as Romanian troops attacked along the entire line, capturing Odessa's water reservoirs on 17 August. The Soviet forces put up a stubborn resistance, launching repeated counter-attacks, inflicting and taking heavy casualties. The Royal Romanian Air Force actively supported the ground troops, disrupting Soviet naval traffic to and from Odessa, and also destroying an armored train on 20 August. During the night of 18 August, two Romanian torpedo boats (NMS Viscolul and NMS Vijelia) attacked and damaged a Soviet destroyer south of Odessa. It was one of the few actions the Romanian Navy undertook to support the siege.

By 24 August, despite constant attacks, the Romanians were bogged down in front of the Soviets' main line of defense. The 4th Army had already suffered 27,307 casualties, including 5,329 killed in action. Nevertheless, the Soviets were also weakened, and thanks to the capture of Kubanka, Romanian heavy artillery now threatened the port of Odessa. Over the next three days, there was a lull in the fighting.

On 28 August, the Romanians resumed their offensive, reinforced by a German assault battalion and ten heavy artillery battalions. The 4th, 11th and 1st Army Corps advanced towards Gnileakovo and Vakarzhany, only to be pushed back in some areas by a strong Soviet counterattack the following day. On 30 August the Romanians retook the initiative, but gained very little ground. The Soviets temporarily retook Kubanka but were driven back by nightfall. Soviet troops in Vakarzhany were encircled and continued to fight until 3 September, when combined German and Romanian infantry successfully stormed the village.

On 3 September, General Ciupercă submitted a memoir to by-now Marshal Antonescu, highlighting the poor condition of the front-line divisions, which were exhausted after nearly a month of continuous fighting. He proposed a reorganization of six divisions (the 3rd, 6th, 7th, 14th, 21st Infantry and Guard Divisions), which would be split into 2 corps and supported by 8 heavy artillery battalions. These units would then attack in a single area to break through the Soviet line. The memoir however, was rejected by both Antonescu and Bridagier-General Alexandru Ioaniţiu, the chief of the Romanian General Staff, who argued that an attack in a single direction would leave the rest of the Romanian line too exposed. Marshal Antonescu subsequently issued a new directive calling for attacks between Tatarka and Dalnik, and Gniliavko and Dalnik, to be made by the 11th and 3rd Corps, respectively. Ioaniţiu forwarded a note to Major-General Arthur Hauffe, the chief of the German military mission to Romania, informing him of the situation at Odessa and requesting assistance in the form of aircraft and several pioneer battalions. Although the Royal Romanian Air Force enjoyed some success against the Soviets ground and air forces, it was ill-equipped for anti-shipping raids, and the Soviets were being steadily reinforced and resupplied via the Navy.

Meanwhile, the Romanian offensive was halted to wait for reinforcements. A German detachment led by Lieutenant-General René von Courbier and comprising one infantry regiment, one assault pioneer regiment and two artillery regiments arrived. Concurrently, the Soviets also received 15,000 men and ammunition. On 9 September, Ciupercă was replaced by Lieutenant-General Iosif Iacobici, who was expressly ordered to follow the General Staff's directives without question. The offensive resumed on 12 September, but was again stopped temporarily on September 14 as Romanian and German artillery units were running low on ammunition. Two Vanatori battalions were encircled by Red Army troops near the Hadjibey bank, but were eventually relieved despite Soviet efforts to annihilate them.

On the night of 15 September, Soviet troops broke contact with the Romanian 1st Corps and retreated toward the southeast. On 16 September, the 1st Corps took the heights northwest of Gross-Liebenthal. Romanian troops also occupied the area south of the Sukhoy bank. Over 3,000 Soviet soldiers were captured, but these losses were replaced by the 157th Rifle Division, with a strength of 12,600 troops. Also, 18 Soviet companies were brought in from Novorossiysk. Partisan fighting continued, however, in the city's catacombs.

With the advance of Axis forces into the Soviet Union, STAVKA decided to evacuate the defenders of Odessa. On the night of 14–15 October 1941, the Black Sea Fleet evacuated the garrison to Sevastopol where most of the units were later destroyed in the bitter fighting that took place there during the Defence of Sevastopol. The Black Sea Fleet also managed to evacuate 350,000 soldiers and civilians.[3]

The operations at Odessa highlighted significant weaknesses in the Romanian Army, leading both military and political leaders in the country to call for a discontinuation of military operations against the Soviet Union.[6] Antonescu ignored such objections, regarding continued participation and eventual victory on the Eastern Front as necessary for the restoration of Romania's territorial integrity.[7]

Casualties suffered during the Siege of Odessa were:

The recapture of Bessarabia and Northern Bukovina in Operation Munchen and the subsequent victory at Odessa led to a partial demobilization of the Romanian army, which was reduced in size from nearly 900,000 personnel on 1 October to 465,000 on 1 January 1942. Politically, the presence of Romanian troops in Odessa and the establishment of the Transnistria Governorate led to a deterioration of Romania's international situation, with the British declaring war on Romania on 6 December, and on 12 December Romania declared war on the United States in solidarity with Germany and Japan. Thus, Romania found itself at war against two major powers with whom it had no direct conflict of interests, but who would later conduct major bombing campaigns against her.[8]

Soviet Recognition of the Defenders of Odessa

The Medal "For the Defence of Odessa" was established on 22 December 1942. Approximately 38,000 people have been awarded (servicemen of the Soviet Army, Navy, Ministry of Internal Affairs, and civil citizens who took part in the defense of Odessa). Odessa was one of the first four Soviet cities to be awarded the title of "Hero City" in 1945 (the others being Leningrad, Stalingrad, Sevastopol).

Museum of the Heroic Defense of Odessa (411th Coastal Battery Memorial) was opened on the day of the 30th anniversary of the victory over Nazi Germany, 9 May 1975. Close by is also the Museum of Partisan Glory (catacombs), which is an underground museum that memorialized the partisan movement in the Odessa region. It was established in 1969 in the village of Nerubayske in Odessa region.