Sigizmund Levanevsky was born to a Polish family in St. Petersburg. His brother Józef Lewoniewski (1899-1933) was a Polish military and sports pilot. Sigizmund took part in the October Revolution on the Bolshevik side, later took part in the civil war in Russia, serving in the Red Army since 1918. In 1925 he graduated from the Sevastopol Naval Aviation School and became a military pilot. In 1930 he was withdrawn to reserve.

Since 1933 he had been a pilot with the Glavsevmorput' (Main Northern Maritime Route's Administration) and had accomplished several long distance flights. On July 20, 1933 he brought from Anadyr to Nome the American pilot James Mattern, who had been forced to land near Anadyr during his attempt of a flight around the world and then been eventually rescued by the local Eskimos. In April 1934 Levanevsky piloted from an improvised airfield on the Arctic ice of the Chukchi Sea, taking part in the successful aerial rescue operation saving people from the sunken steamship Cheliuskin. He was awarded the title of the Hero of the Soviet Union for this deed, though he actually didn't even reach their "ice-camp" because of his crash near Vankarem, so he didn't rescue anyone. 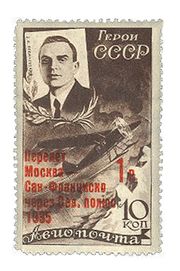 In August 1935, Levanevsky completed his first North Pole flight, a journey from Moscow to San Francisco. A contemporary of Charles Lindbergh, Levanevsky was celebrated as a hero of the new age of aviation. In early 1936 he flew back from Los Angeles, United States to Moscow, USSR covering 19,000 kilometers (over 11,800 miles) on his way.

On August 12, 1937 a type Bolkhovitinov DB-A (no. N-209, a Dalniy Bombardirovshik-Academy, i.e. Long-range Bomber) aircraft with 6-men crew under captaincy of Levanevsky started its long distance flight from Moscow to the USA via the North Pole. The radiocommunications with the crew broke off the next day, on the 13th of August, at 17:58 Moscow time when the aircraft encountered adverse weather conditions. The Soviet Government financed two aerial searches for the missing aircraft using purchased US aircraft under the command of Canadian bush and Antarctic pilot Herbert Hollick-Kenyon in 1937 and 1938. Jimmie Mattern flew a Lockheed 12, "The Texan" from California to assist in the search for his former rescuer in the initial search.[1] After the unsuccessful search attempts all the members of the crew were presumed dead.

In March 1999, Dennis Thurston of the Minerals Management Service in Anchorage located what appeared to be wreckage in the shallows of Camden Bay, between Prudhoe Bay and Kaktovik. There was conjecture in the media that it was Levanevsky's aircraft, but a subsequent attempt to locate the object again proved unsuccessful.