From Infogalactic: the planetary knowledge core
Jump to: navigation, search
"Sgn" redirects here. For the capitalized abbreviation SGN, see SGN (disambiguation).
For the signature sgn(σ) of a permutation, see even and odd permutations.
Not to be confused with Sine function. 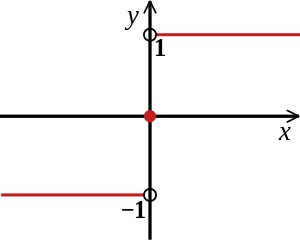 The signum function of a real number x is defined as follows: 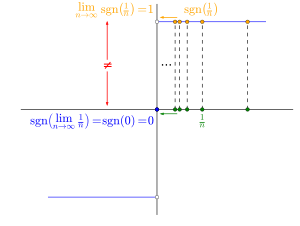 The sign function is not continuous at the point 0.

Any real number can be expressed as the product of its absolute value and its sign function:

Similarly, for any real number x,

The signum function is the derivative of the absolute value function (up to the indeterminacy at zero): Note, the resultant power of x is 0, similar to the ordinary derivative of x. The numbers cancel and all we are left with is the sign of x.

(where H(x) is the Heaviside step function using the standard H(0) = 1/2 formalism). Using this identity, it is easy to derive the distributional derivative:

The signum can also be written using the Iverson bracket notation:

The signum can also be written using the floor and the absolute value functions:

which gets sharper as

, note that it's the derivative of

. This is inspired from the fact that the above is exactly equal for all nonzero x if

, and has the advantage of simple generalization to higher-dimensional analogues of the sign function (for example, the partial derivatives of

The signum function can be generalized to complex numbers as

except z = 0. The signum of a given complex number z is the point on the unit circle of the complex plane that is nearest to z. Then, for z ≠ 0,

where arg is the complex argument function. For reasons of symmetry, and to keep this a proper generalization of the signum function on the reals, also in the complex domain one usually defines, for z = 0:

Another generalization of the sign function for real and complex expressions is csgn,[3] which is defined as:

is the real part of z,

is the imaginary part of z.

At real values of

, it is possible to define a generalized function–version of the signum function,

everywhere, including at the point

cannot be evaluated at

; and the special name,

is necessary to distinguish it from the function

is not defined, but