From Infogalactic: the planetary knowledge core
(Redirected from Signal (electronics))
Jump to: navigation, search
This article is about signals in electrical engineering. For other uses, see Signal.

A signal as referred to in communication systems, signal processing, and electrical engineering "is a function that conveys information about the behavior or attributes of some phenomenon".[1] In the physical world, any quantity exhibiting variation in time or variation in space (such as an image) is potentially a signal that might provide information on the status of a physical system, or convey a message between observers, among other possibilities.[2] The IEEE Transactions on Signal Processing states that the term "signal" includes[3] audio, video, speech, image, communication, geophysical, sonar, radar, medical and musical signals.

Other examples of signals are the output of a thermocouple, which conveys temperature information, and the output of a pH meter which conveys acidity information.[1] Typically, signals are often provided by a sensor, and often the original form of a signal is converted to another form of energy using a transducer. For example, a microphone converts an acoustic signal to a voltage waveform, and a speaker does the reverse.[1]

The formal study of the information content of signals is the field of information theory. The information in a signal is usually accompanied by noise. The term noise usually means an undesirable random disturbance, but is often extended to include unwanted signals conflicting with the desired signal (such as crosstalk). The prevention of noise is covered in part under the heading of signal integrity. The separation of desired signals from a background is the field of signal recovery,[4] one branch of which is estimation theory, a probabilistic approach to suppressing random disturbances.

Definitions specific to sub-fields are common. For example, in information theory, a signal is a codified message, that is, the sequence of states in a communication channel that encodes a message.

In the context of signal processing, arbitrary binary data streams are not considered as signals, but only analog and digital signals that are representations of analog physical quantities.

In a communication system, a transmitter encodes a message into a signal, which is carried to a receiver by the communications channel. For example, the words "Mary had a little lamb" might be the message spoken into a telephone. The telephone transmitter converts the sounds into an electrical voltage signal. The signal is transmitted to the receiving telephone by wires; at the receiver it is reconverted into sounds.

In telephone networks, signalling, for example common-channel signaling, refers to phone number and other digital control information rather than the actual voice signal.

A second important distinction is between discrete-valued and continuous-valued. Digital signals are sometimes defined as discrete-valued sequences of quantified values, that may or may not be derived from an underlying continuous-valued physical process. In other contexts, digital signals are defined as the continuous-time waveform signals in a digital system, representing a bit-stream. In the first case, a signal that is generated by means of a digital modulation method is considered as converted to an analog signal, while it is considered as a digital signal in the second case.

Another important property of a signal (actually, of a statistically defined class of signals) is its entropy or information content. 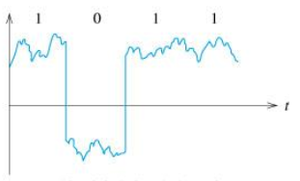 A digital signal has two or more distinguishable waveforms, in this example, high voltage and low voltages, each of which can be mapped onto a digit. Characteristically, noise can be removed from digital signals provided it is not too large.

Digital signals often arise via sampling of analog signals, for example, a continually fluctuating voltage on a line that can be digitized by an analog-to-digital converter circuit, wherein the circuit will read the voltage level on the line, say, every 50 microseconds and employing a fixed number of bits. The resulting stream of numbers is stored as digital data on a discrete-time and quantized-amplitude signal. Computers and other digital devices are restricted to discrete time.

One of the fundamental distinctions between different types of signals is between continuous and discrete time. In the mathematical abstraction, the domain of a continuous-time (CT) signal is the set of real numbers (or some interval thereof), whereas the domain of a discrete-time (DT) signal is the set of integers (or some interval). What these integers represent depends on the nature of the signal; most often it is time. 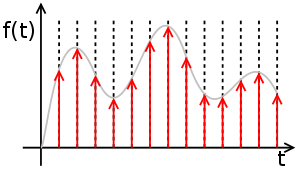 Discrete-time signal created from a continuous signal by sampling 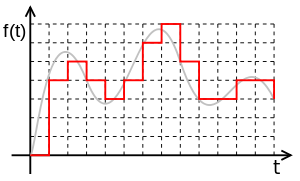 Digital signal resulting from approximation to an analog signal, which is a continuous function of time

If for a signal, the quantities are defined only on a discrete set of times, we call it a discrete-time signal. A simple source for a discrete time signal is the sampling of a continuous signal, approximating the signal by a sequence of its values at particular time instants.

A continuous-time real (or complex) signal is any real-valued (or complex-valued) function which is defined at every time t in an interval, most commonly an infinite interval.

If a signal is to be represented as a sequence of numbers, it is impossible to maintain arbitrarily high precision - each number in the sequence must have a finite number of digits. As a result, the values of such a signal are restricted to belong to a finite set; in other words, it is quantized. Quantization is the process of converting a continuous analog audio signal to a digital signal with discrete numerical values.

Signals in nature can be converted to electronic signals by various sensors. Some examples are:

A typical role for signals is in signal processing. A common example is signal transmission between different locations. The embodiment of a signal in electrical form is made by a transducer that converts the signal from its original form to a waveform expressed as a current (I) or a voltage (V), or an electromagnetic waveform, for example, an optical signal or radio transmission. Once expressed as an electronic signal, the signal is available for further processing by electrical devices such as electronic amplifiers and electronic filters, and can be transmitted to a remote location by electronic transmitters and received using electronic receivers.

In Electrical engineering programs, a class and field of study known as "signals and systems" (S and S) is often seen as the "cut class" for EE careers, and is dreaded by some students as such. Depending on the school, undergraduate EE students generally take the class as juniors or seniors, normally depending on the number and level of previous linear algebra and differential equation classes they have taken.[8]

The field studies input and output signals, and the mathematical representations between them known as systems, in four domains: Time, Frequency, s and z. Since signals and systems are both studied in these four domains, there are 8 major divisions of study. As an example, when working with continuous time signals (t), one might transform from the time domain to a frequency or s domain; or from discrete time (n) to frequency or z domains. Systems also can be transformed between these domains like signals, with continuous to s and discrete to z.

Although S and S falls under and includes all the topics covered in this article, as well as Analog signal processing and Digital signal processing, it actually is a subset of the field of Mathematical modeling. The field goes back to RF over a century ago, when it was all analog, and generally continuous. Today, software has taken the place of much of the analog circuitry design and analysis, and even continuous signals are now generally processed digitally. Ironically, digital signals also are processed continuously in a sense, with the software doing calculations between discrete signal "rests" to prepare for the next input/transform/output event.

In past EE curricula S and S, as it is often called, involved circuit analysis and design via mathematical modeling and some numerical methods, and was updated several decades ago with Dynamical systems tools including differential equations, and recently, Lagrangians. The difficulty of the field at that time included the fact that not only mathematical modeling, circuits, signals and complex systems were being modeled, but physics as well, and a deep knowledge of electrical (and now electronic) topics also was involved and required.

Today, the field has become even more daunting and complex with the addition of circuit, systems and signal analysis and design languages and software, from MATLAB and Simulink to NumPy, VHDL, PSpice, Verilog and even Assembly language. Students are expected to understand the tools as well as the mathematics, physics, circuit analysis, and transformations between the 8 domains.

Because mechanical engineering topics like friction, dampening etc. have very close analogies in signal science (inductance, resistance, voltage, etc.), many of the tools originally used in ME transformations (Laplace and Fourier transforms, Lagrangians, sampling theory, probability, difference equations, etc.) have now been applied to signals, circuits, systems and their components, analysis and design in EE. Dynamical systems that involve noise, filtering and other random or chaotic attractors and repellors have now placed stochastic sciences and statistics between the more deterministic discrete and continuous functions in the field. (Deterministic as used here means signals that are completely determined as functions of time).

EE taxonomists are still not decided where S&S falls within the whole field of signal processing vs. circuit analysis and mathematical modeling, but the common link of the topics that are covered in the course of study has brightened boundaries with dozens of books, journals, etc. called Signals and Systems, and used as text and test prep for the EE, as well as, recently, computer engineering exams.[9] The Hsu general reference given below is a good example, with a new edition scheduled for late 2013/ early 2014.