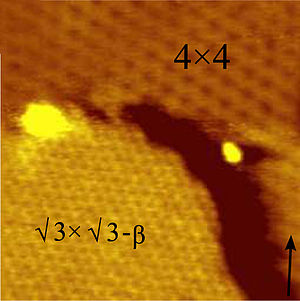 Silicene is a two-dimensional allotrope of silicon, with a hexagonal honeycomb structure similar to that of graphene. Contrary to graphene, silicene is not flat, but has a periodically buckled topology; the coupling between layers in silicene is much stronger than in multilayered graphene; and the oxidized form of silicene, 2D silica, has a very different chemical structure from graphene oxide.

Although theorists had speculated about the existence and possible properties of silicene,[2][3][4] researchers first observed silicon structures that were suggestive of silicene in 2010.[5][6] Using a scanning tunneling microscope they studied self-assembled silicene nanoribbons and silicene sheets deposited onto a silver crystal, Ag(110) and Ag(111), with atomic resolution. The images revealed hexagons in a honeycomb structure similar to that of graphene. Density functional theory (DFT) calculations showed that silicon atoms tend to form such honeycomb structures on silver, and adopt a slight curvature that makes the graphene-like configuration more likely. However, such a model has been invalidated for Si/Ag(110): the Ag surface displays a missing-row reconstruction upon Si adsorption [7] and the honeycomb structures observed are tip artefacts.[8] This was followed by the discovery of dumbbell reconstruction in silicene[9] which explains the formation mechanisms of layered silicene[10] and silicene on Ag.[11] In 2015, a silicene field-effect transistor made its debut[12] that opens up new opportunities for two-dimensional silicon for various fundamental science studies and electronic applications,[13][14][15]

Similarities and differences with graphene

Silicon and carbon are similar atoms. They lie next to each other in the same group on the periodic table and have an s2 p2 electronic structure. The 2D structures of silicene and graphene also are quite similar but have important differences.[16] While both form hexagonal structures, graphene is completely flat, while silicene forms a buckled hexagonal shape. Its buckled structure gives silicene a tuneable band gap by applying an external electric field. Silicene's hydrogenation reaction is more exothermic than graphene's. Another difference is that since silicon's covalent bonds do not have pi-stacking, silicene does not cluster into a graphite-like form.[17]

Silicene and graphene have similar electronic structures. Both have a Dirac cone and linear electronic dispersion around the k point. Both also have a quantum spin Hall effect. Both are expected to have the characteristics of massless Dirac fermions that carry charge, but this is only predicted for silicene and has not been observed, likely because it is expected to only occur with free-standing silicene which has not been synthesized. It is believed that the substrate silicene is made on has a substantial effect on its electronic properties.[17]

Unlike carbon atoms in graphene, silicon atoms tend to adopt sp3 hybridization over sp2 in silicene, which makes it highly chemically active on the surface and allows its electronic states to be easily tuned by chemical functionalization.[18]

Early studies of silicene showed that different dopants within the silicene structure provide the ability to tune its band gap.[19] Very recently, the band gap in epitaxial silicene has been tuned by oxygen adatoms from zero-gap-type to semiconductor-type.[18] With a tunable band gap, specific electronic components could be made-to-order for applications that require specific band gaps. The band gap can be brought down to 0.1 eV, which is considerably smaller than the band gap (0.4 eV) found in traditional field effect transistors (FETs).[19]

Inducing n-type doping within silicene requires an alkali metal dopant. Varying the amount adjusts the band gap. Maximum doping increases the band gap 0.5eV. Due to heavy doping, the supply voltage must also be ~30V. Alkali metal-doped silicene can only produce n-type semiconductors; modern day electronics require a complementary n-type and p-type junction. Neutral doping (i-type) is required to produce devices such as light emitting diodes (LEDs). LEDs use a p-i-n junction to produce light. A separate dopant must be introduced to generate p-type doped silicene. Iridium (Ir) doped silicene allows p-type silicene to be created. Through platinum (Pt) doping, i-type silicene is possible.[19] With the combination of n-type, p-type and i-type doped structures, silicene has opportunities for use in electronics.

Power dissipation within traditional metal oxide semiconductor field effect transistors (MOSFETs) generates a bottleneck when dealing with nano-electronics. Tunnel field-effect transistors (TFETs) may become an alternative to traditional MOSFETs because they can have a smaller subthreshold slope and supply voltage, which reduce power dissipation. Computational studies showed that silicene based TFETs outperform traditional silicon based MOSFETs. Silicene TFETs have an on-state current over 1mA/μm, a sub-threshold slope of 77 mV/decade and a supply voltage of 1.7 V. With this much increased on-state current and reduced supply voltage, power dissipation within these devices is far below that of traditional MOSFETs and its peer TFETs.[19] 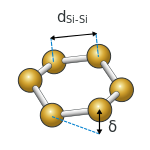 Close up of one hexagonal ring in silicene with displayed buckled structure.

2D silicene is not fully planar, apparently featuring chair-like puckering distortions in the rings. This leads to ordered surface ripples. Hydrogenation of silicenes to silicanes is exothermic. This led to the prediction that the process of conversion of silicene to silicane (hydrogenated silicene) is a candidate for hydrogen storage. Unlike graphite, which consists of weakly held stacks of graphene layers through dispersion forces, interlayer coupling in silicenes is very strong.

The buckling of the hexagonal structure of silicene is caused by pseudo-Jahn-Teller distortion (PJT). This is caused by strong vibronic coupling of unoccupied molecular orbitals (UMO) and occupied molecular orbitals (OMO). These orbitals are close enough in energy to cause the distortion to high symmetry configurations of silicene. The buckled structure can be flattened by suppressing the PJT distortion by increasing the energy gap between the UMO and OMO. This can be done by adding a lithium ion.[17]

In addition to its potential compatibility with existing semiconductor techniques, silicene has the advantage that its edges do not exhibit oxygen reactivity.[20]

In 2012 several groups independently reported ordered phases on the Ag(111) surface.[21][22][23] Results from scanning tunneling spectroscopy measurements [24] and from angle-resolved photoemission spectroscopy (ARPES) appeared to show that silicene would have similar electronic properties as graphene, namely an electronic dispersion resembling that of relativistic Dirac fermions at the K points of the Brillouin zone,[21] but the interpretation was later disputed and shown to arise due to a substrate band.[25][26][27][28][29][30][31]

Besides silver, silicene has been reported to grow on ZrB
2,[32] and iridium.[33] Theoretical studies predicted that silicene is stable on the Al(111) surface as a honeycomb-structured monolayer (with a binding energy similar to that observed on the 4x4 Ag(111) surface) as well as a new form dubbed "polygonal silicene", its structure consisting of 3-, 4-, 5- and 6-sided polygons.[34]

The p-d hybridisation mechanism between Ag and Si is important to stabilise the nearly flat silicon clusters and the effectiveness of Ag substrate for silicene growth explained by DFT calculations and molecular dynamics simulations.[30][35] The unique hybridized electronic structures of epitaxial 4 × 4 silicene on Ag(111) determines highly chemical reactivity of silicene surface, which are revealed by scanning tunneling microscopy and angle-resolved photoemission spectroscopy. The hybridization between Si and Ag results in a metallic surface state, which can gradually decay due to oxygen adsorption. X-ray photoemission spectroscopy confirms the decoupling of Si-Ag bonds after oxygen treatment as well as the relatively oxygen resistance of Ag(111) surface, in contrast to 4 × 4 silicene [with respect to Ag(111)].[30]