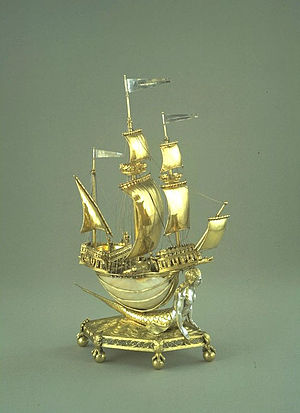 Silver-gilt or gilded/gilt silver, sometimes known in American English by the French term vermeil, is silver gilded with gold. Most large objects made in goldsmithing that appear to be gold are actually silver-gilt; for example most sporting trophies, medals (such as "gold medals" in all Olympic Games after 1912[1]), and many crown jewels. Apart from being much cheaper than gold, large silver-gilt objects are also much lighter if required to be lifted, and stronger. Compared to plain silver, for delicate objects like the Nef (illustrated), or those with much intricate detail like monstrances, gilding greatly reduced the need for cleaning and polishing, and so reduced the risk of damage to them. The "gold" threads used in embroidered goldwork are normally also silver-gilt. 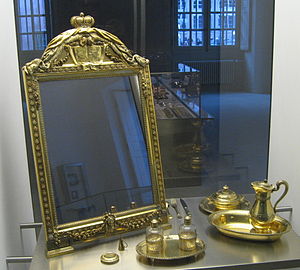 Silver-gilt objects have been made since ancient times across Eurasia, using a variety of gilding techniques, and a distinctive depletion gilding technique was developed by the Incas in Pre-Columbian South America. "Overlaying" or folding or hammering on gold foil or gold leaf is mentioned in Homer's Odyssey (Bk vi, 232),[2] and fire-gilding with mercury dates to at least the 4th century BC, and was the most common method until the Early Modern period at least, though dangerous for the workers,[3] as has been known for centuries:

Hang him; a gilder that hath his brains perished with quicksilver is not more cold in the liver

Today electroplating is the most commonly used method. Keum-boo is a special Korean technique of silver-gilding, using depletion gilding. In China gilt-bronze, also known as ormolu, was more common.

In America the French term vermeil was sometimes used from the mid-19th century, but "silver-gilt" remains the usual term in English and is preferred in academic usage, except for describing American modern jewellery ("vermeil" has a legal definition in the USA).[4][5] 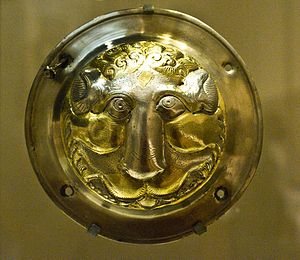 Silver objects could be gilded at any point, not just when first made, and items regularly handled, such as toilet service sets for dressing-tables or tableware, often needed regilding after a few years, as the gold began to wear off. In 18th century London two different silversmiths charged 3 shillings per ounce of silver for an initial gilding, and 1 shilling and 9 pence per ounce for regilding.[6] Often only the interior of cups was gilded, perhaps from concern at the chemical compounds used to clean tarnish from silver. This is called parcel-gilt.

Fully silver-gilt items are visually indistinguishable from gold, and were no doubt often thought to be solid gold. When the English Commonwealth sold the Crown Jewels of England after the execution of Charles I they were disappointed in the medieval "Queen Edith's Crowne, formerly thought to be of massy gold, but upon trial found to be of silver gilt", which was valued at only £16, compared to £1,110 for the "imperial crowne".[7] The English Gothic Revival architect, Sir George Gilbert Scott was concerned by the morality of this. Gilding of the interior only he accepted, but with all-over gilding "we ... reach the actual boundary of truth and falsehood; and I am convinced that if we adopt this custom we overstep it.... why make our gift look more costly than it is? We increase its beauty, but it is at the sacrifice of truth."[8] Indeed, some Early Medieval silver-gilt Celtic brooches had compartments, apparently for small lead weights to aid such deception.[9]