From Infogalactic: the planetary knowledge core
Jump to: navigation, search
This article is about United States military decoration. For other uses, see Silver Star (disambiguation). 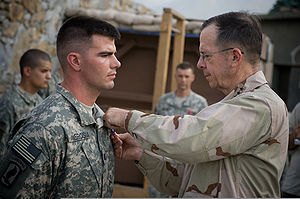 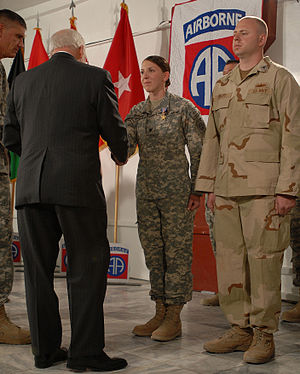 The Silver Star is awarded for gallantry not justifying the award of one of the next higher valor awards: the Distinguished Service Cross, the Navy Cross, or the Air Force Cross.[3] The gallantry displayed must have taken place while in action against an enemy of the United States, while engaged in military operations involving conflict with an opposing foreign force, or while serving with friendly foreign forces engaged in an armed conflict against an opposing armed force in which the United States is not a belligerent party.[1]

Air Force pilots and combat systems officers and Navy and Marine Corps Naval Aviators and Naval Flight Officers flying fighter aircraft are often considered eligible to receive the Silver Star upon becoming an ace (i.e., having five or more confirmed aerial kills), which entails the pilot and, in multi-seat fighters, the weapons system officer or radar intercept officer, intentionally and successfully risking his life multiple times under combat conditions and emerging victorious.[4] However, during the Vietnam War, the last conflict to produce U.S. fighter aces, the USAF pilot, the two USAF navigators/weapon systems officers (who were later retrained as USAF pilots), the USN naval aviator and the one USN naval flight officer/radar intercept officer to achieve this distinction were eventually awarded the Air Force Cross and Navy Cross, respectively, in addition to Silver Stars previously awarded for earlier aerial kills.[citation needed]

Second and subsequent awards of the Silver Star are denoted by oak leaf clusters in the Army and Air Force and by ​5⁄16 inch stars in the Navy, Marine Corps, and Coast Guard.[1][6][7][8]

The Department of Defense does not keep extensive records of awards of the Silver Star. Independent groups estimate that between 100,000 and 150,000 Silver Stars have been awarded since the decoration was established.[9] Colonel David Hackworth is likely to be the person who has been awarded the most Silver Stars. He was awarded ten Silver Stars for service in the Korean War and the Vietnam War.[10]

Three nurses who served in World War I were cited with Citation Stars for their service in July 1918. In 2007, it was discovered that they had never been awarded their Citation Stars; they were awarded the Silver Star posthumously.[11]

The next known woman to receive the medal is Sergeant Leigh Ann Hester, who received it in 2005 for gallantry during an insurgent ambush on a convoy in Iraq.[12] Army Specialist Monica Lin Brown was awarded the Silver Star in March 2008 for heroism in the War in Afghanistan.[12]