From Infogalactic: the planetary knowledge core
(Redirected from Simantonayana)
Jump to: navigation, search

Both form a part of the prenatal rituals, part of Saṃskāra in the Hindu tradition that is celebrated in India by the pregnant mother and father of the child, during the seventh or eighth month of pregnancy.[1][2][3]

The four prenatal rites which are part of the 16 samskaras (personal sacraments followed by Hindus and which are based on Grhya Sutras) performed on a single day, in the modern times, starting from morning till evening, are the following.[1]

Srimantham is a family and a community festival with prayers seeking safe birth of the child. This is the third of 16 samskaras.[1][4] 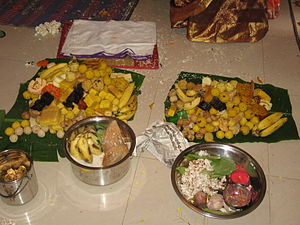 Different varieties of sweets served on a Pumsavana function.

Pumsavana (Sanskrit: पुंसवन, Puṁsavana) is also a vedic prescribed rite that is performed to beget a son. This is performed during the second, third or fourth month of pregnancy.[5]

In some regions, this rite is combined with Srimantham and the two together is called the Pumsavana Srimantham. It includes a luncheon feast.[1][2]

This is usually performed in the evening after the Srimantham or Pumsavana Srimantham is performed. Valakappu ( 'valai' in Tamil means "bangle" or "bracelet" and 'kappu' means to "adorn"). On this occasion, which is the prerogative of the women folk of the family to perform, the pregnant mother would be dressed in a fine silk saree, and women of all ages slip bangles and bracelets on her arm. The reasoning for this is that the bangles would act as "protective amulet against evil eye and evil spirits". This is a ritual which the Indian immigrant families in the United States also observe along with Srimantham and pooshuttal. It is similar to the baby shower ritual observed in other parts of the world.[1][2]

Another related rite that used to be observed in the earlier days, as a separate ritual, but is now combined with Srimantham, in South India is called the poochuttal meaning "adorning the head of the expectant mother with flowers". After observing this ritual, in the olden days, the expectant mother used to go to her parental house for delivery. In the traditional practice, the parents of the expectant mother offer gifts of new clothes, sweets, betel leaves and nuts and coconuts to their daughter and son-in-law.[3]

Food prepared on this occasion is special and consist of rice, sambhar, rasam, chutney, tow or three types of vegetable dishes, payasam, laddo, curd and pappad and many more items.[3]