Simon & Schuster, Inc., a division of CBS Corporation, is a publisher founded in New York City in 1924 by Richard L. Simon and M. Lincoln ("Max") Schuster. It is one of the largest English-language publishers, formerly known as the "Big 6", now known as the "Big Five". It publishes over 2,000 titles annually under 35 different imprints.

Crossword puzzles first appeared in the New York World in 1913, and became a popular feature in newspapers. In 1924, Simon's aunt, a crossword puzzle devotee, asked Simon whether there was a book of these puzzles that she could give to a friend. Simon discovered that none had been published, and, with Schuster, launched a company to exploit the opportunity.[2] At the time, Simon was a piano salesman and Schuster was editor of an automotive trade magazine and together they pooled $8,000 to start the company.[3]

To attract attention, the book came with a pencil attached.[2] The advertising campaign implied that it was about to become a new fad:

The ad proved prophetic, and crossword puzzles were indeed the craze of 1924.[2] Simon & Schuster continues to be the preeminent U.S. publisher of crossword puzzle books. 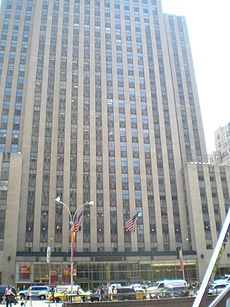 In 1976, Gulf+Western acquired the company which was grossing about $50 million a year for $11 million, most of it in Gulf+Western stock.[3] Nine years later, Prentice Hall was brought into the company fold, followed by mapmaker Gousha in 1987. G+W would change its name to Paramount Communications in 1989.

In 1994, Paramount was sold to the original Viacom, allowing S&S to launch several new imprints in conjunction with channels owned by Viacom's MTV Networks. Simon & Schuster's first move under Viacom was the acquisition of Macmillan USA.

In 1998, Viacom sold Simon & Schuster's educational operations, including Prentice Hall and Macmillan, to Pearson PLC, the global publisher and owner of Penguin and Financial Times.

Viacom would split into two companies at the end of 2005: one called CBS Corporation (which inherited S&S), and the other retaining the Viacom name. Despite the split, National Amusements retains majority control of both firms.

As part of CBS, Simon & Schuster is the primary publisher for books related to various media franchises owned by and/or aired on CBS, such as How I Met Your Mother, Star Trek, and CSI.

In April 2012, the United States Department of Justice filed United States v. Apple Inc., naming Apple, Simon & Schuster, and four other major publishers as defendants. The suit alleged that they conspired to fix prices for e-books, and weaken Amazon.com's position in the market, in violation of antitrust law.[6]

In December 2013, a federal judge approved a settlement of the antitrust claims, in which Simon & Schuster and the other publishers paid into a fund that provided credits to customers who had overpaid for books due to the price-fixing.[7]

In October 2014, Simon & Schuster signed a multi-year partnership deal with Amazon.com in negotiations concerning the price of e-books.[8]

According to one source, The Sower, the logo of Simon & Schuster, was inspired by the 1850 Jean-François Millet painting of the same name.[9] According to Michael Korda, the colophon is a small reproduction of The Sower by Sir John Everett Millais. [5]