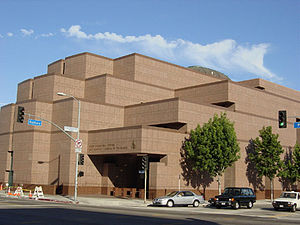 The Simon Wiesenthal Center (often abbreviated SWC), with headquarters in Los Angeles, California, United States, was established in 1977 and named for Nazi hunter Simon Wiesenthal.[1] According to its mission statement, it is "an international Jewish human rights organization dedicated to repairing the world one step at a time. The Center's multifaceted mission generates changes through the Snider Social Action Institute and education by confronting antisemitism, hate and terrorism, promoting human rights and dignity, standing with Israel, defending the safety of Jews worldwide, and teaching the lessons of the Holocaust for future generations."[2]

The Center is accredited as a non-governmental organization (NGO) at the United Nations, the UNESCO, and the Council of Europe.

The organization aims to foster tolerance and understanding through community involvement, educational outreach and social action. The Center closely interacts on an ongoing basis with a variety of public and private agencies, meeting with elected officials, the United States and foreign governments, diplomats and heads of state. Other issues that the Center deals with include: the prosecution of Nazi war criminals, fighting against ODESSA networks; Holocaust and tolerance education; Middle East Affairs; and extremist groups, neo-Nazism, and hate on the Internet. 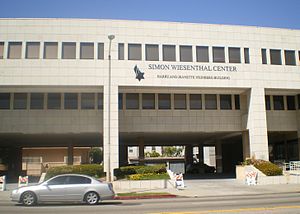 The organization is named after Simon Wiesenthal, a Mauthausen survivor, former architectural engineer and Galician Jew who lost many family members in the Holocaust, and later pledged to hunt down Nazis and bring them to justice. He founded and headed the Jewish Documentation Center in Vienna. Simon Wiesenthal had nothing to do with the operation or activities of the SWC other than giving it its name.

The SWC is headed by Rabbi Marvin Hier, its Dean and Founder. Rabbi Abraham Cooper is the Associate Dean and Rabbi Meyer May is the Executive Director. The organization publishes a seasonal magazine, Response.

The Center’s educational arm, Museum of Tolerance, was founded in 1993 and hosts 350,000 visitors annually. Some of the programs sponsored by the Museum include: 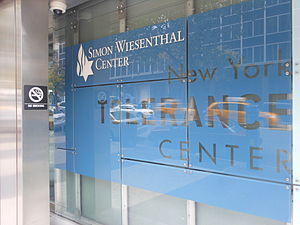 The Simon Wiesenthal Center and its Museum of Tolerance is one of many partner organizations of the Austrian Service Abroad (Auslandsdienst) and the corresponding Austrian Holocaust Memorial Service (Gedenkdienst).

Moriah Films, also known as the Jack and Pearl Resnick Film Division of the SWC, was created to produce theatrical documentaries to educate both national and international audiences, with a focus on contemporary human rights and ethical issues and Jewish experience. Two films produced by the division, Genocide (film) and The Long Way Home (1997 film) have received the Academy Award for Best Documentary Feature.[4]

The headquarters of the Simon Wiesenthal Center is in Los Angeles. However, there are also international offices located at the following cities: New York, Miami, Toronto, Jerusalem, Paris, and Buenos Aires.

Through its national and international offices the Center carries out its above mentioned mission of preserving the memory of the Holocaust.

Between 1984 and 1990 the Center published seven volumes of Simon Wiesenthal Center Annual, focusing on the scholarly study of the Holocaust, broadly defined. This series is ISSN 0741-8450.

The Library and Archives of the center in L.A. has grown to a collection of about 50,000 volumes and non-print materials. Moreover, the Archives incorporates photographs, diaries, letters, artifacts, artwork and rare books, which are available to researchers, students and the general public.

In November 2005, the Simon Wiesenthal Center gave the name of four suspected former Nazi criminals to German authorities. The names were the first results of Operation Last Chance, a drive launched that year by the center to track down former Nazis for World War II-era crimes before they die of old age.

The center is featured in the real-life-story-based Freedom Writers. An exterior view of the center is given, and there are scenes inside the museum, showing simulation entrances to gas chambers in death camps.

Statements by the SWC

In 2013, the SWC released a paper on the Boycott, Divestment, Sanctions (BDS) movement. The paper analyzed the BDS campaign throughout its various outlets and concluded that the BDS movement is a "thinly-disguised effort to coordinate and complement the violent strategy of Palestinian, Arab, and Muslim “rejectionists” who have refused to make peace with Israel for over six decades, and to pursue a high-profile campaign composed of anti-Israel big lies to help destroy the Jewish State by any and all means". The paper also noted that the BDS campaign attacks Israel's entire economy and society, holding all (Jewish) Israelis as collectively guilty.[5]

On March 8, 2007, the head of international relations for the Simon Wiesenthal Center, Stanley Trevor Samuels, was convicted (and later acquitted in an appeal) of defamation by a Paris courthouse for accusing the French-based Committee for Charity and Support for the Palestinians (CBSP) of sending funds to the families of Palestinian suicide bombers.[6]

In its filing of the suit, the CBSP labelled the accusations "ridiculous", stating that its charitable work consisted of providing aid to some 3,000 Palestinian orphans. The court ruled that documents produced by the Wiesenthal Center established no "direct or indirect participation in financing terrorism" on the part of the CBSP, and that the allegations were "seriously defamatory".[6]

The Wiesenthal Center appealed the court ruling, and the appeal was granted in July 2009.[7]

After a Canadian newspaper reported upon the 2006 Iranian sumptuary law controversy (based on a report written by Iranian exiles on Iranian religious minorities being forced to wear badges identifying them to Muslims), the dean of the Simon Wiesenthal Center, Rabbi Marvin Hier, wrote to United Nations Secretary General Kofi Annan urging the international community to pressure Iran to drop the measure.[8]

Numerous other sources, including Maurice Motamed, the Jewish member of the Iranian parliament and the Iranian Embassy in Canada, refuted the report as untrue. The National Post later retracted the original article ("Iran eyes badges for Jews: Law would require non-Muslim insignia") and published an article, to the contrary ("Experts say reports of badges for Jews in Iran is untrue"). However, the Simon Wiesenthal Center refused to admit any mistake on their part and insisted that the widely debunked allegations were true.[9]

In January 2004, the Paris branch of the center asked the President of Ireland, Mary McAleese, to suspend the 'Irish Museum of the Year Award' given to the Hunt Museum in Limerick, until the conclusion of a demanded inquiry into the provenance of a significant number of items in the collection. He argued that this was needed due to the close ties of the founders, John and Gertrude Hunt to the head of the Nazi Party (NSDP-AO) in Ireland, among others, and British suspicions during the war of espionage activity on the part of the couple. The center also claimed, 'The “Hunt Museum Essential Guide” describes only 150 of the over 2000 objects in the Museum’s collection and, notably, without providing information on their provenance - data that all museums are now required to provide in accordance with international procedure.'[10]

This essentially accused the Hunt Museum in Limerick of keeping art and artifacts looted during the Second World War, which was described as "unprofessional in the extreme" by the expert Lynn Nicholas that cleared the museum of wrongdoing.[11][12] The claim was taken so seriously that the examination was supervised by the prestigious Royal Irish Academy, whose 2006 report is available on line.[13] McAleese, who had been written to by the center, then criticized a Dr. Samuels of the center for "a tissue of lies", adding that the center had diminished the name of Simon Wiesenthal.[14] The center said that it had prepared its own 150-page report in May 2008 that would be published after vetting by its lawyers, but had not done so as of November 2008.[15]

A branch museum in Jerusalem-—expected to be completed in 2009-—sparked protests from the city's Muslim population. The museum is being built on what Rabbi Marvin Hier described as "derelict land": a thousand-year-old Muslim graveyard called the Mamilla Cemetery, much of which has already been paved over. The complaints were rejected by Israel's Supreme Court, leading to a demonstration by several hundred people in November 2008.[16][17] On November 19, 2008 a group of US Jewish and Muslim leaders sent a letter to the Wiesenthal Center to halt the construction of the Museum of Tolerance on the site.

As of February 2010, the Museum of Tolerance's plan for construction has been fully approved by Israeli courts and is proceeding at the compound of Mamilla Cemetery. The courts ruled that the compound had been neglected as a spiritual site by the Muslim community, in effect not functioning as a cemetery for decades (while simultaneously used for other purposes), and was thus mundra, i.e. abandoned, under Muslim laws.[18]

The Simon Wiesenthal Center opposed the construction of Park51, a Muslim community center, two blocks from Ground Zero. The executive director of the Simon Wiesenthal Center's Museum of Tolerance in Manhattan, Rabbi Meyer May said it was "insensitive" to locate the centre there. The Jewish Week noted that the Center itself was once accused of intolerance when it built a museum in Jerusalem on land that was once a Muslim cemetery, after gaining approval from Israeli courts.[20]

The Simon Wiesenthal Center welcomed the news that the Vatican has demanded that Bishop Richard Williamson recant his views denying the Holocaust before being re-admitted to the Roman Catholic Church. Williamson was one of the four priests from the Society of St. Pius X who were excommunicated 20 years ago for taking part in the consecration of Bishops contrary to Canon Law.[21]

The Simon Wiesenthal Center criticized Hugo Chávez for various statements, including his January 2006 statement that “[t]he world is for all of us, then, but it so happens that a minority, the descendants of the same ones that crucified Christ, the descendants of the same ones that kicked Bolívar out of here and also crucified him in their own way over there in Santa Marta, in Colombia. A minority has taken possession all of the wealth of the world...”[22] The Simon Wiesenthal Center omitted the reference to Bolívar without ellipsis, stated that Chávez was referring to Jews, and denounced the remarks as antisemitic by way of his allusions to wealth. Meanwhile, according to Forward.com, the American Jewish Committee, the American Jewish Congress, and the Confederation of Jewish Associations of Venezuela defended Chávez, stating that he was speaking not of Jews, but of South America's white oligarchy. The Wiesenthal Center's representative in Latin America replied that Chávez's mention of Christ-killers was "ambiguous at best" and that the "decision to criticize Chávez had been taken after careful consideration".[23]

"In the live broadcast, Tahara told Tanaka that her father, former Prime Minister Kakuei Tanaka was “done in by America, by the Jews and (Ichiro) Ozawa, (then-leader of the Democratic Party of Japan) too, was done in (by America and/or the Jews).” [24]

SWC's associate dean, Rabbi Abraham Cooper, condemned the Japanese band Kishidan for wearing uniforms resembling those of the SS, the armed wing of the Nazi party. The band wore military-inspired uniforms, adorned with the German medal Iron Cross and Nazi insignia such as the death skull and SS eagle on MTV Japan's primetime program "Mega Vector." Cooper said in a written protest to the band's management company Sony Music Artists, MTV Japan and the Japanese entertainment group Avex (Kishidan's label at the time being and also the current one) that "there is no excuse for such an outrage" and that "many young Japanese are "woefully uneducated" about the crimes against humanity committed by Nazi Germany and Japan during the second world war, but global entities like MTV and Sony Music should know better".[25]

As a result, Sony Music Artists and Avex[26] issued a joint statement of public apology on their respective websites.