The Singing Revolution is a commonly used name for events between 1987 and 1991 that led to the restoration of the independence of Estonia, Latvia and Lithuania.[1][2] The term was coined by an Estonian activist and artist, Heinz Valk, in an article published a week after the June 10–11, 1988, spontaneous mass night-singing demonstrations at the Tallinn Song Festival Grounds.[3]

After World War II, the Baltic States had been fully incorporated into the USSR after military occupation and annexation first in 1940 and then again in 1944. Mikhail Gorbachev introduced "glasnost" (openness) and "perestroika" (restructuring) in 1985, hoping to stimulate the failing Soviet economy and encourage productivity, particularly in the areas of consumer goods, the liberalisation of cooperative businesses and the service economy. Glasnost rescinded limitations on political freedoms in the Soviet Union which led to problems within the non-Russian nations occupied in the build-up to war in the 1940s.

Hitherto unrecognised issues previously kept secret by the Moscow government were admitted to in public, causing dissatisfaction within the Baltic States. Combined with the war in Afghanistan and the nuclear fallout in Chernobyl, grievances were aired in a publicly explosive and politically decisive manner. Estonians were concerned about the demographic threat to their national identity posed by the influx of individuals from foreign ethnic groups to work on such large Soviet development projects as phosphate mining.[4]

Access to Western émigré communities abroad and, particularly in Estonia, informal relations with Finland and access to Finnish TV showing the Western lifestyle also contributed to widespread dissatisfaction with the Soviet system and provoked mass demonstrations as repression on dissidents, nationalists, religious communities and ordinary consumers eased substantially towards the end of the 1980s.[citation needed]

Massive demonstrations against the Soviet regime began after widespread liberalisation of the regime failed to take into account national sensitivities. It was hoped by Moscow that the non-Russian nations would remain within the USSR despite the removal of restrictions on freedom of speech and national icons (such as the local pre-1940 flags).[citation needed] However, the situation deteriorated to such an extent that by 1989 there were campaigns aimed at freeing the nations from the Soviet Union altogether.

From 1987, a cycle of mass demonstrations featuring spontaneous singing eventually collected 300,000 Estonians in Tallinn to sing national songs and hymns that were strictly forbidden[citation needed] during the years of the Soviet occupation, as Estonian rock musicians played.

On 14 May 1988, the first expression of national feeling occurred during the Tartu Pop Music Festival. Five patriotic songs were first performed during this festival. People linked their hands together and a tradition had begun.[citation needed]

In June the Old Town Festival was held in Tallinn, and after the official part of the festival, the participants moved to the Song Festival Grounds and similarly started to sing patriotic songs together spontaneously.[citation needed]

On 26–28 August 1988, the Rock Summer Festival was held, and patriotic songs, composed by Alo Mattiisen, were played.[citation needed]

On 11 September 1988, a massive song festival, called "Song of Estonia", was held at the Tallinn Song Festival Arena. This time nearly 300,000 people came together, more than a quarter of all Estonians. On that day political leaders were participating actively, and were for the first time insisting on the restoration of independence.[citation needed]

On 16 November 1988, the legislative body of Estonia issued the Estonian Sovereignty Declaration. In 1990 Estonia was the first Soviet republic to defy the Soviet army by offering alternative service to Estonian residents scheduled to be drafted. Most Estonians, however, simply began avoiding the draft.[citation needed]

The Singing Revolution lasted over four years, with various protests and acts of defiance. In 1991, as Soviet tanks attempted to stop the progress towards independence, the Estonian Supreme Soviet together with the Congress of Estonia proclaimed the restoration of the independent state of Estonia and repudiated Soviet legislation. People acted as human shields to protect radio and TV stations from the Soviet tanks. Through these actions Estonia regained its independence without any bloodshed.[5]

Independence was declared on the late evening of August 20, 1991, after an agreement between different political parties was reached. The next morning Soviet troops, according to Estonian TV, attempted to storm Tallinn TV Tower but were unsuccessful.[6] The Communist hardliners' coup attempt failed amidst mass pro-democracy demonstrations in Moscow led by Boris Yeltsin.

On 22 August 1991, Iceland became the first nation to recognise the newly restored independence of Estonia. Today, a plaque commemorating this event is situated on the outside wall of the Foreign Ministry, which itself is situated on Islandi väljak 1, or "Iceland Square 1". The plaque reads; "The Republic of Iceland was the first to recognize, on 22 August 1991, the restoration of the independence of the Republic of Estonia", in Estonian, Icelandic and English. Some other nations did not recognise the annexation of Estonia by the Soviet Union.[7][8]

During the second half of the 1980s as Mikhail Gorbachev introduced glasnost and perestroika in the USSR, which rolled back restrictions to freedom in the Soviet Union, aversion to the Soviet regime had grown into the third Latvian National Awakening, which reached its peak in mid-1988.

In 1986, it became widely known to the public that the USSR was planning to build another hydroelectric power plant on Latvia's largest river Daugava, and that a decision had been made to build a metro in Riga.[citation needed] Both of these projects planned by Moscow could have led to the destruction of Latvia's landscape and cultural and historical heritage. In the press journalists urged the public to protest against these decisions. The public reacted immediately, and in response the Environmental Protection Club was founded on February 28, 1987. During the second half of the 1980s the Environmental Protection Club became one of the most influential mass movements in the region and began to make demands for the restoration of Latvia's independence.[citation needed]

On June 14, 1987, the anniversary of the 1941 deportations, the human rights group "Helsinki-86", which had been founded a year earlier, organized people to place flowers at the Freedom Monument (Latvia's symbol of independence, which was erected in 1935). This is widely cited as the beginning of the National Awakening. However the Latvian Song and Dance Festival of 1985 also had been sometimes named for choirs requesting and performing the song Gaismas pils conducted by Haralds Mednis after the main event. The song, which speaks about the rebirth of a free Latvian nation, usually a staple of the festival, had been removed from the repertoire and the conductor, disliked by Soviet authorities, sidelined.[9]

On June 1 and 2, 1988, the Writers' Union held a congress during which the democratization of society, Latvia's economic sovereignty, the cessation of immigration from the USSR, the transformation of industry and the protection of Latvian language rights were discussed by delegates. Over the course of this conference, for the first time in post-war Latvia, the secret protocol of the "Molotov-Ribbentrop Pact", which had determined Latvia's fate after 1939, was publicly acknowledged.[citation needed]

The congress of the Writers' Union stirred up public opinion and provided an additional stimulus for the general process of national revival.[citation needed]

In the summer of 1988, two of the most important organizations of the revival period began to assemble themselves - the Latvian People's Front and the Latvian National Independence Movement (LNIM). Soon afterwards the more radically inclined Citizens' Congress called for complete non-compliance with the representatives of the Soviet regime.[citation needed] All of these organizations had a common goal: the restoration of democracy and independence. On October 7, 1988, there was a mass public demonstration, calling for Latvia's independence and the establishment of regular judicial order. On October 8 and 9 the first congress of the Latvian People's Front was held. This organization, which attracted 200,000 members, became the main representative of the return to independence.[citation needed]

On August 23, 1989, the fiftieth anniversary of the Molotov-Ribbentrop Pact, the People's Fronts of all three Baltic countries held a huge demonstration of unity - the "Baltic Way". A 600 km (373 mi) long human "chain" from Tallinn through Riga to Vilnius was assembled. This was a symbolic demonstration of the people's call for independence from the Soviet Union.

New elections to the Supreme Soviet took place on March 18, 1990, in which the supporters of independence gained a victory. On May 4, 1990, the new Supreme Soviet of the Latvian SSR adopted a motion, "Declaration of Independence", which called for the restoration of the inter-war Latvian state and the 1922 Constitution.

In January 1991, however, pro-communist political forces attempted to restore Soviet power. With the use of force, attempts were made to overthrow the new assembly. Latvian demonstrators managed to stop the Soviet troops from re-occupying strategic positions, and these events are known as the "Days of the Barricades".

On August 19, 1991, an unsuccessful attempt at a coup d'état took place in Moscow when a small group of prominent Soviet functionaries failed to regain power due to large pro-democracy demonstrations in Russia. This event resulted in Latvia swiftly moving toward independence. After the coup's failure the Supreme Soviet of the Latvian Republic announced on August 21, 1991, that the transition period to full independence declared on May 4, 1990 had come to an end. Therefore, Latvia was proclaimed a fully independent nation whose judicial foundation stemmed back to the statehood that existed before the occupation on June 17, 1940. 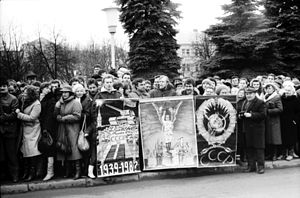 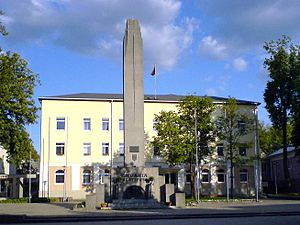 Thousands of people regularly gathered in public places across Lithuania and sang national songs and Roman Catholic hymns. The popularity of patriotic songs had risen significantly during this period.[citation needed] Many popular singers had followed this trend, often using the poetry of nationalist poets, such as Bernardas Brazdžionis or Justinas Marcinkevičius as the lyrics of their songs. Rock March also promoted awareness of the issue among the people.[citation needed]

On June 3, 1988, the Sąjūdis, a political and social movement to lead the independence and pro-democracy movement, was established.[citation needed]

The active nationalist opposition towards the regime culminated in the return of Vilnius Cathedral, formerly used as a museum of fine arts, to the Catholic community on 21 October 1988, followed by the gradual restoration of national symbols, which included the erection or restoration of independence monuments throughout the country. The national anthem of Lithuania and the traditional national Tricolore were legalised in Lithuania on 18 November 1988, officially replacing the flag and the anthem of the Lithuanian Soviet Socialist Republic.[citation needed]

Five decades after Lithuania was occupied and incorporated into the Soviet Union, Lithuania became the first republic to declare its independence from the USSR on March 11, 1990, and was later followed by Latvia and Estonia. However, almost all nations in the international community, except Iceland, hesitated to recognise independence for Lithuania until August 1991.[citation needed]

The Soviet military responded harshly. On January 13, 1991, fourteen non-violent protesters in Vilnius died and hundreds were injured defending the Vilnius Television Tower and the Parliament from Soviet assault troops and tanks. Lithuanians referred to the event as Bloody Sunday. The discipline and courage of its citizens - linking arms and singing in the face of tanks and armour-piercing bullets - avoided a much greater loss of life and showed the world that Lithuania's citizens were prepared to defend national independence.[citation needed]

The international governments recognised Lithuanian independence after the failure of the coup d'état in August 1991.