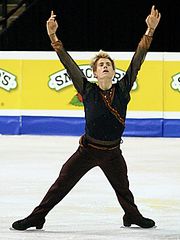 Single skating is a discipline of figure skating in which male and female skaters compete individually. Men's singles and ladies' singles[1] are both Olympic disciplines and are both governed by the International Skating Union, along with the other Olympic figure skating events, pair skating and ice dancing. Single skaters perform jumps, spins, step sequences, spirals, and other moves in the field as part of their competitive programs.

Short programs at the senior and junior levels are two minutes and fifty seconds long. Skaters are penalized if they skate over that time limit.

Free skating consists of a well balanced program of free skating elements, such as jumps, spins, steps and other linking movements executed with a minimum of two footed skating in harmony with music of the competitor's choice, except that music with lyrics is not permitted.

The free skating programs are 4​1⁄2 minutes for men, 4 minutes for ladies. Skaters are allowed a time margin of +/- 10 seconds, and are penalized for going outside that range.

Figure skaters competing in an ISU-sanctioned event are judged under the ISU Judging System.[2][3][4][5]

Competitors often choose music in consultation with their coach and choreographer.[6] For long programs, skaters generally search for music with different moods and tempos.[6] In competitive programs, vocal music is allowed only if it contains no lyrics or words, however, judges do not always penalize violations. At the 2011 World Championships, Florent Amodio's long program music included words but an insufficient number of judges voted to penalize it.[7] In June 2012, the International Skating Union voted to allow music with words in competitive programs beginning in the 2014–15 season.

Figure skates for single skaters possess a larger set of jagged teeth called toe picks on the front of the blade than skates used by ice dancers. The toe picks are used primarily in jumping and footwork. The inside edge of the blade is on the side closest to the skater; the outside edge of the blade is on the side farthest from the skater. In figure skating it is always desirable to skate on only one edge of the blade, never on both at the same time (which is referred to as a flat). The apparently effortless power and glide across the ice exhibited by elite figure skaters fundamentally derives from efficient use of the edges to generate speed.

Skaters and family members may design their own costumes or turn to professional designers.[8][9][10]