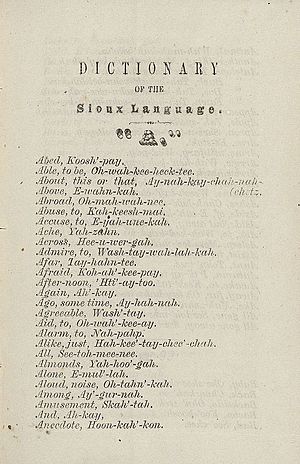 Page from Dictionary of the Sioux Language, 1866

Comparison of Sioux and Nakota dialects

The following table shows some of the main phonetic differences between the regional varieties of the Sioux language. The table also provides comparison with the two closely related Nakota languages (Assiniboine and Stoney), which are however no longer mutually intelligible with the Sioux language.[7][8]

There are also numerous lexical differences among the Sioux dialects as well as between the sub-dialects. Yankton-Yanktonai is in fact lexically closer to the Lakota language than it is to Santee-Sisseton. The following table gives some examples:[7]

Life for the Dakota changed significantly in the nineteenth century as the early years brought increased contact with white settlers, particularly Christian missionaries. The goal of the missionaries was to introduce the Dakota to Christian beliefs. To achieve this, the missions began to transcribe the Dakota language. In 1836, brothers Samuel and Gideon Pond, Rev. Stephen Return Riggs, and Dr. Thomas Williamson set out to begin translating hymns and Bible stories into Dakota. By 1852, Riggs and Williamson had completed a Dakota Grammar and Dictionary (Saskatchewan Indian Cultural Center). Eventually, the entire Bible was translated.

Today, it is possible to find a variety of texts in Dakota. Traditional stories have been translated, children’s books, even games such as Pictionary and Scrabble. Despite such progress, written Dakota is not without its difficulties. The Pond brothers, Rev. Riggs, and Dr. Williamson were not the only missionaries documenting the Dakota language. Around the same time, missionaries in other Dakota bands were developing their own versions of the written language. Since the 1900s, professional linguists have been creating their own versions of the orthography. The Dakota have also been making modifications. “Having so many different writing systems is causing confusion, conflict between our [the Dakota] people, causing inconstancy in what is being taught to students, and making the sharing of instructional and other materials very difficult” (SICC).

Prior to the introduction of the Latin alphabet, the Dakota did have a writing system of their own: one of representational pictographs. In pictographic writing, a drawing represents exactly what it means. For example, a drawing of a dog literally meant a dog. Palmer writes that,

“As a written language, it [pictographs] was practical enough that it allowed the Lakota to keep a record of years in their winter counts which can still be understood today, and it was in such common usage that pictographs were recognized and accepted by census officials in the 1880s, who would receive boards or hides adorned with the head of the household’s name depicted graphically” (pg. 34).

For the missionaries however, documenting the Bible through pictographs was impractical and presented significant challenges.

Dakota is an agglutinating language. It features suffixes, prefixes, and infixes. Each affix has a specific rule in Dakota. For example, the suffix –pi is added to the verb to mark the plurality of an animate subject (Shaw, pg. 10). “With respect to number agreement for objects, only animate objects are marked, and these by the verbal prefix wicha-“(Shaw, pg. 11). Also, there is no gender agreement in Dakota.

Example of the use of –pi:

Example of the use of wicha-

(Shaw, pg. 12) Infixes are rare in Dakota, but do exist when a statement features predicates requiring two “patients.”

Dakota has subject/object/ verb (SOV) word order. Along the same line, the language also has postpositions. Examples of word order:

In Dakota, the verb is the most important part of the sentence. There are many verb forms in Dakota, although they are “dichotomized into a stative-active classification, with the active verbs being further subcategorized as transitive or intransitive” (Shaw, pg. 11). Some examples of this are:

The phonology, morphology, and syntax of Dakota are very complex. There are a number of broad rules that become more and more specific as they are more closely examined. The components of the language become somewhat confusing and more difficult to study as more sources are examined, as each scholar has a somewhat different opinion on the basic characteristics of the language.