Sir Philip Sidney (30 November 1554 – 17 October 1586) was an English poet, courtier, scholar, and soldier, who is remembered as one of the most prominent figures of the Elizabethan age. His works include Astrophel and Stella, The Defence of Poesy (also known as The Defence of Poetry or An Apology for Poetry), and The Countess of Pembroke's Arcadia.

Born at Penshurst Place, Kent, he was the eldest son of Sir Henry Sidney and Lady Mary Dudley. His mother was the eldest daughter of John Dudley, 1st Duke of Northumberland, and the sister of Robert Dudley, 1st Earl of Leicester. His younger brother, Robert was a statesman and patron of the arts, and was created Earl of Leicester in 1618. His younger sister, Mary, married Henry Herbert, 2nd Earl of Pembroke and was a writer, translator and literary patron. Sidney dedicated his longest work, the Arcadia, to her. After her brother's death, Mary reworked the Arcadia, which became known as The Countess of Pembroke's Arcadia.

Philip was educated at Shrewsbury School and Christ Church, Oxford. In 1572 he was elected to Parliament as Member of Parliament for Shrewsbury[1] and in the same year travelled to France as part of the embassy to negotiate a marriage between Elizabeth I and the Duc D'Alençon. He spent the next several years in mainland Europe, moving through Germany, Italy, Poland, the Kingdom of Hungary and Austria. On these travels, he met a number of prominent European intellectuals and politicians. During a 1577 diplomatic visit to Prague, Sidney secretly visited the exiled Jesuit priest Edmund Campion.[2]

Returning to England in 1575, Sidney met Penelope Devereux, the future Lady Rich; though much younger, she would inspire his famous sonnet sequence of the 1580s, Astrophel and Stella. Her father, Walter Devereux, 1st Earl of Essex, is said to have planned to marry his daughter to Sidney, but he died in 1576. In England, Sidney occupied himself with politics and art. He defended his father's administration of Ireland in a lengthy document. More seriously, he quarrelled with Edward de Vere, 17th Earl of Oxford, probably because of Sidney's opposition to the French marriage, which de Vere championed. In the aftermath of this episode, Sidney challenged de Vere to a duel, which Elizabeth forbade. He then wrote a lengthy letter to the Queen detailing the foolishness of the French marriage. Characteristically, Elizabeth bristled at his presumption, and Sidney prudently retired from court.

His artistic contacts were more peaceful and more significant for his lasting fame. During his absence from court, he wrote Astrophel and Stella and the first draft of The Arcadia and The Defence of Poesy. Somewhat earlier, he had met Edmund Spenser, who dedicated The Shepheardes Calender to him. Other literary contacts included membership, along with his friends and fellow poets Fulke Greville, Edward Dyer, Edmund Spenser and Gabriel Harvey, of the (possibly fictitious) 'Areopagus', a humanist endeavour to classicise English verse.

Sidney had returned to court by the middle of 1581 and in 1584 was MP for Kent. That same year Penelope Devereux was married, apparently against her will, to Lord Rich. Sidney was knighted in 1583. An early arrangement to marry Anne Cecil, daughter of Sir William Cecil and eventual wife of de Vere, had fallen through in 1571. In 1583, he married Frances, teenage daughter of Sir Francis Walsingham. In the same year, he made a visit to Oxford University with Giordano Bruno, who subsequently dedicated two books to Sidney.

Both through his family heritage and his personal experience (he was in Walsingham's house in Paris during the St. Bartholomew's Day Massacre), Sidney was a keenly militant Protestant. In the 1570s, he had persuaded John Casimir to consider proposals for a united Protestant effort against the Roman Catholic Church and Spain. In the early 1580s, he argued unsuccessfully for an assault on Spain itself. Promoted General of Horse in 1583,[1] his enthusiasm for the Protestant struggle was given a free rein when he was appointed governor of Flushing in the Netherlands in 1585. In the Netherlands, he consistently urged boldness on his superior, his uncle the Earl of Leicester. He conducted a successful raid on Spanish forces near Axel in July, 1586. 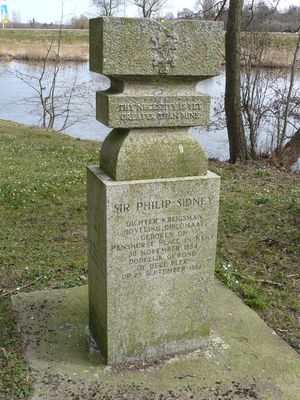 Later that year, he joined Sir John Norris in the Battle of Zutphen, fighting for the Protestant cause against the Spanish.[3] During the battle, he was shot in the thigh and died of gangrene 26 days later, at the age of 31. According to the story, while lying wounded he gave his water to another wounded soldier, saying, "Thy necessity is yet greater than mine".[4] As he lay dying, Sidney composed a song to be sung by his deathbed.[5] This became possibly the most famous story about Sir Phillip, intended to illustrate his noble and gallant character.[4] It also inspired evolutionary biologist John Maynard Smith to formulate a problem in signalling theory which is known as the Sir Philip Sidney game.[6] 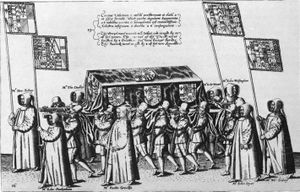 The funeral of Sir Philip Sidney, 1586

Sidney's body was returned to London and interred in the Old St. Paul's Cathedral on 16 February 1587. The grave and monument were destroyed in the Great Fire of London in 1666. A modern monument in the crypt lists him among the important graves lost.

Already during his own lifetime, but even more after his death, he had become for many English people the very epitome of a Castiglione courtier: learned and politic, but at the same time generous, brave, and impulsive. The funeral procession was one of the most elaborate ever staged, so much so that his father-in-law, Francis Walsingham, almost went bankrupt.[3] Never more than a marginal figure in the politics of his time, he was memorialised as the flower of English manhood in Edmund Spenser's Astrophel, one of the greatest English Renaissance elegies.

An early biography of Sidney was written by his friend and schoolfellow, Fulke Greville. While Sidney was traditionally depicted as a staunch and unwavering Protestant, recent biographers such as Katherine Duncan-Jones have suggested that his religious loyalties were more ambiguous. 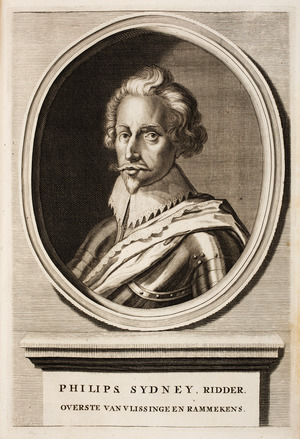 Sir Philip Sidney, as depicted in an 18th-century history of the Netherlands

A memorial, erected in 1986 at the location where he was mortally wounded by the Spanish, can be found at the entrance of a footpath (" 't Gallee") located in front of the petrol station at the Warnsveldseweg 170.

In Arnhem, in front of the house in the Bakkerstraat 68, an inscription on the ground reads: "IN THIS HOUSE DIED ON THE 17 OCTOBER 1586 * SIR PHILIP SIDNEY * ENGLISH POET, DIPLOMAT AND SOLDIER, FROM HIS WOUNDS SUFFERED AT THE BATTLE OF ZUTPHEN. HE GAVE HIS LIFE FOR OUR FREEDOM". The inscription was unveiled on 17 October 2011, exactly 425 years after his death, in the presence of Philip Sidney, Viscount De L'Isle, a descendant of the brother of Philip Sidney.

The city of Sidney, Ohio, in the United States and a street in Zutphen, Netherlands, have been named after Sir Philip. A statue of him can be found in the park at the Coehoornsingel where, in the harsh winter of 1795, English and Hanoverian soldiers were buried who had died while retreating from advancing French troops.[8]

Another statue of Sidney, by Arthur George Walker, forms the centrepiece of Shrewsbury School's war memorial to alumni who died serving in World War I (unveiled 1924).[9]

Sidney features as a friend of Giordano Bruno and an agent for Sir Francis Walsingham in the historical crime novels of S J Parris.

W. B. Yeats appears to allude to Sidney as a model of the ideal man in his poem "In Memory of Major Robert Gregory" when he calls Robert Gregory "Our Sidney and our perfect man".

Sidney is referenced in the T.S. Eliot's poem "A Cooking Egg", published in his 1920 poetry collection Aras Vos Prec, where Eliot expresses a desire to speak with Sir Philip in heaven.