From Infogalactic: the planetary knowledge core
Jump to: navigation, search
For the people, see Sirenik Eskimos.

Sirenik Yupik,[3] Sireniki Yupik[4] (also Old Sirenik or Vuteen), Sirenik, or Sirenikskiy is an extinct Eskimo–Aleut language. It was spoken in and around the village of Sireniki (Сиреники) in Chukotka Peninsula, Chukotka Autonomous Okrug, Russia. The language shift has been a long process, ending in total language death. In January 1997, the last native speaker of the language, a woman named Vyie (Valentina Wye) (Russian: Выйе), died.[5][6][7] Ever since that point, the language has been extinct;[5] nowadays, all Sirenik Eskimos speak Siberian Yupik or Russian.

This article is based on Menovschikov (1964),[11] with cited examples transliterated from Cyrillic transcription to the International Phonetic Alphabet. 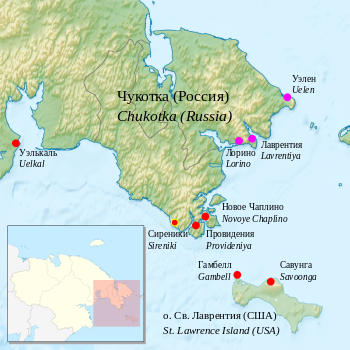 The Yupik settlement of Sireniki (the red with yellow dot)

Some argue that the Sirenik language is a remnant of a third group of Eskimo languages, in addition to Yupik and Inuit groups,[6][7][12][13][14] see online a visual representation by tree[15] and an argumentation based on comparative linguistics in.[16] In fact, the exact genealogical classification of Sireniki language is not settled yet,[6] and some others regard it belonging to the Yupik branch.[17][18]

Many words are formed from entirely different roots than in Siberian Yupik.[19] Also the grammar has several peculiarities compared to other Eskimo languages, and even compared to Aleut. For example, dual number is not known in Sireniki Eskimo, while most Eskimo–Aleut language have dual,[20] including even its neighboring Siberian Yupik relatives.[21] The peculiarities amounted to mutual unintelligibility with even its nearest language relatives. This forced Sirenik Eskimos to use Chukchi language as a lingua franca when speaking with neighboring Eskimo peoples.[22] Thus, any external contacts required using a different language for Sireniki Eskimos: they either resorted to use of lingua franca, or used Siberian Yupik languages (being definitely a mutually unintelligible, different language for them, not just a dialect of their own).[23] This difference from all their language relatives may be the result of a supposed long isolation from other Eskimo groups:[24][25] Sireniki Eskimos may have been in contact only with speakers of unrelated languages for many centuries in the past, influenced especially by non-relative Chukchi.[22]

Although the number of its speakers was very few even at the end of the nineteenth century, the language had at least two dialects in the past.[5]

As for its morphological typology, it has polysynthetic and incorporative features (just like the other Eskimo languages).

Some notes (very far from being a complete description):

Like all other Eskimo languages, the morphology is rather complex. A description grouped by lexical categories follows.

Although morphology will be treated grouped into a nominal and a verbal part, many Eskimo languages show features which “crosscut” any such groupings in several aspects:

Although person and number are expressed in a single suffix, sometimes it can be traced back to consist of a distinct person and a distinct number suffix.[26]

Paradigms can make a distinction in 3rd person for “self”, thus the mere personal suffix (of the verb or noun) can distinguish e.g.

Thus, it can be translated into English (and some other languages) using reflexive pronoun. This notion concerns also other concepts in building larger parts of the sentence and the text, see section #Usage of third person suffixes.

Although other Eskimo languages know more than the familiar two grammatical numbers (by having also dual), Sireniki uses only singular and plural, thus it lacks dual. As mentioned, Sireniki is peculiar in this aspect not only among Eskimo languages, but even in the entire Eskimo–Aleut language family,[20] even its neighboring Siberian Yupik relatives have dual.[21]

Suffix -/ɕuɣɨn/- meaning “to be similar to sth”:

Predicative form of a noun

Predicative form of a noun can be built using suffix -/t͡ʃ ɨ/-:[28]

Not only the grammatical cases of nouns are marked by suffixes, but also the person of possessor (use of possessive pronouns in English) can be expressed by agglutination.

It is just an excerpt for illustration: not all cases are shown, Sirenik language has more grammatical cases. The table illustrates also why Sirenik language is treated as agglutinative (rather than fusional).

There is no grammatical gender (or gender-like noun class system).

To see why a single case can play such distinct roles at all, read morphosyntactic alignment, and also a short table about it.

Some finer grammatical functions are expressed using postpositions. Most of them are built as a combinations of cases

in a similar way as we use expressions like "on top of" in English.

Also at verbs, the morphology is very rich. Suffixes can express grammatical moods of the verb (e.g. imperative, interrogative, optative), and also negation, tense, aspect, the person of subject and object. Some examples (far from being comprehensive):

The rich set of morphemes makes it possible to build huge verbs whose meaning could be expressed (in most of widely known languages) as whole sentences (consisting of more words) . Sireniki – like the other Eskimo languages – has polysynthetic and incorporative features, in many forms, among others polypersonal agreement.

The polysynthetic and incorporative features mentioned above manifest themselves in most of the ways Sirenik language can express grammatical categories.

Even the grammatical polarity can be expressed by adding a suffix to the verb.

An example for negative polarity: the negation form of the verb /aʁaʁ-/ (to go):

Also linguistic modality can be expressed by suffixes. Modal verbs like "want to", "wish to" etc. do not even exist:[35]

The table illustrates also why Sirenik is treated as agglutinative (rather than fusional).

Four grammatical voices are mentioned in:[37]

all of them are expressed by agglutination, thus, no separate words are required.

A distinction between two kinds of participles (adverbial participle and adjectival participle) makes sense in Sireniki (just like in Hungarian, see határozói igenév and melléknévi igenév for detailed description of these concepts; or in Russian, see деепричастие and причастие).

Sireniki has many kinds of participles in both categories. In the followings, they will be listed, grouped by the relation between the “dependent action” and “main action” (or by other meanings beyond this, e.g. modality) – following the terminology of.[11] A sentence with a participle can be imagined as simulating a subordinating compound sentence where the action described in the dependent clause relates somehow to the action described in the main clause. In English, an adverbial clause may express reason, purpose, condition, succession etc., and a relative clause can express many meanings, too.

They can be translated into English e.g. by using an appropriate adverbial clause. There are many of them, with various meanings.

An interesting feature: they can have person and number. The person of the dependent action need not coincide with the that of the main action. An example (meant in the British English usage of “shall / should” in the 1st person: here, conveying only conditional, but no necessity or morality):

Another example (with a different adverbial participle):

They will be discussed in more details below.

Reason, purpose or circumstance of action

Another example,[40] with a somewhat different usage:

Dependent action begins before main action, but they continue together till end

Dependent action is conditional: it does not takes place, although it would (either really, or provided that some—maybe irreal—conditions would hold). Confer also conditional sentence.

Sireniki Eskimo has several adverbial participles to express that.[43] We can distinguish them according to the concerned condition (conveyed by the dependent action): it may be

Confer counterfactual conditional. Sireniki can compress it into an adverbial participle: it is expressed with suffix -/ɣɨjɨqɨɣɨ/- / -/majɨqɨɣɨ/-.

An example (meant in the British English usage of “shall / should” in the 1st person: here, conveying only conditional, but no necessity or morality):

The example in details:

There are more kinds of them.

They can be used not only in attributive role (as in the above examples), but also in predicative role:[44]

Adjectival participle -/kajux/ / -/qajux/ conveys a meaning related rather to modality (than to the relation of dependent action and main action). It conveys meaning “able to”.[45]

Sireniki is (just like many Eskimo languages) an ergative–absolutive language. For English-language materials treating this feature of Sireniki, see Vakhtin's book,[6] or see online a paper treating a relative Eskimo language.[46]

Although the below examples are taken from Inuit Eskimo languages (Kalaallisut), but e.g. Sireniki's distinguishing between two kinds of 3rd person suffixes can be concerned, too (remember section #Person above: there is a distinct reflexive (“own”-like) and an “another person”-like 3rd person suffix).

For a detailed theoretical treatment concerning the notions of topic (and anaphora, and binding), with Eskimo-related examples, see online Maria Bittner's works, especially.[47]

For a treatment of obviation in (among others) Eskimo languages, see online[48] and in more details (also online)[49] from the same authors.