From Infogalactic: the planetary knowledge core
Jump to: navigation, search
For other uses, see Sita (disambiguation).

listen (help·info) meaning "furrow"), also known as Vaidehi, Janaki, Maithili or Bhoomija, is the central female character of the Hindu epic Ramayana and a daughter of King Janak of Janakpur and his wife queen Sunayana. She was the elder sister of Urmila and cousins Mandavi and Shrutakirti.[1][2] She is the consort of the Hindu god Rama (avatar of Vishnu) and is an avatar of Lakshmi (Aadi Shakti of Lord Vishnu), goddess of wealth and wife of Vishnu. She is esteemed as a paragon of spousal and feminine virtues for all Hindu women.[3] Sita is known for her dedication, self-sacrifice, courage and purity.

Sita is described as the daughter of the earth goddess Bhūmi and the adopted daughter of King Janaka of Mithila and Queen Sunayna. In her youth, she marries Rama, the prince of Ayodhya.Soon after her marriage, she goes exile with her husband and brother-in-law Lakshmana. While in exile, the trio settle in the Dandaka forest, from where she is abducted by Ravana, Rakshasa King of Lanka. She is imprisoned in the Ashoka Vatika of Lanka by Ravana. Sita is finally rescued by Rama in the climatic war where Rama slays Ravana. Sita goes into fire for her human body to come out of fire-god's protection and her imitation, abducted by ravan, gets back in the fire. Thereafter, Rama and Sita return to Ayodhya, where they are crowned as king and queen. However, king Rama subjected to the kingly duty and pressure abandons a pregnant Sita when one of his subjects casts doubt over her chastity. In the refuge of Sage Valmiki's hermitage Sita gives birth to twins Lava and Kusha. After her sons grow up and unite with their father, Sita returns to her mother, the Earth's womb, for release from a cruel world as a testimony of her purity. Her other names are Bhumija and Janaki.[4]

Etymology and other names 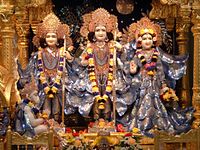 The goddess is best known by the name "Sita", derived from the Sanskrit word sīta, which means furrow.[5] According to Ramayana, Janaka found her while ploughing as a part of a yagna and adopted her. The word sīta was a poetic term, its imagery redolent of fecundity and the many blessings coming from settled agriculture. The Sita of the Ramayana may have been named after a more ancient Vedic goddess Sita, who is mentioned once in the Rigveda as an earth goddess who blesses the land with good crops. In the Vedic era, she was one of the goddesses associated with fertility. A Vedic hymn (Rig Veda 4:57) recites:

In Harivansha Sita has been invoked as one of the names of goddess Arya:

The Kausik-sutra and the Paraskara-sutra associate her repeatedly as the wife of Parjanya (a god associated with rains) and Indra.[5]

Sita is known by many epithets. She is called Jānaki as the daughter of Janaka and Maithili as the princess of Mithila.[6] As the wife of Rama, she is called Ramā. Her father Janaka had earned the sobriquet Videha due to his ability to transcend body consciousness; Sita is therefore also known as Vaidehi.[6]

The birthplace of Sita is disputed.[7] Janakpur of Mithila in Eastern-Madhesh Plain of Southern Nepal[8][9][10] and Sitamarhi,[11][12] Bihar, India near the Nepalese border are described as Sita's birthplace. 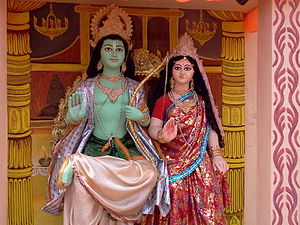 When Sita reaches adulthood, Janaka organises a swayamwara in Janakpurdham with the condition that Sita would marry only that person who would be able to string Pinaka, the bow of the god Shiva. Janaka knew, the bow of Shiva was not even liftable let alone stringable for ordinary mortals, and for selfish people it was not even approachable. Thus, Janaka tries to find the best husband for Sita.

At this time, Vishvamitra had brought Rama and his brother Lakshmana to the forest for the protection of sacrifice. Hearing about this swayamwara, Vishvamitra asks Rama to participate in it and takes Rama and Lakshmana to the palace of Janaka in Janakpur. Janaka is greatly pleased to learn that Rama and Lakshmana are sons of Dasharatha. Next morning, in the middle of the hall, Rama lifts up the bow of Shiva with his left hand, fastens the string tightly and finally breaks the bow. However, another avatar of Vishnu, Parashurama, became really angry as the bow of Shiva was broken. However, he does not realise that Rama is also an avatar of Vishnu, therefore after being informed of this, he apologises for getting angry. Thus, Rama fulfils Janaka's condition to marry Sita. Later on Vivaha Panchami, a marriage ceremony is conducted under the guidance of Satananda. Rama marries Sita, Bharata marries Mandavi, Lakshmana marries Urmila and Shatrughna marries Shrutakirti in Nepal.[2] 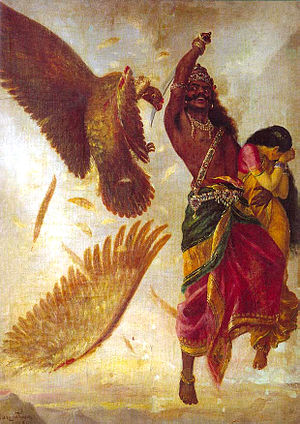 Some time after the wedding, Kaikeyi, Rama's step-mother, compelled Dasharatha into making Bharata king, on coaxing of her maid Manthara and forced Rama to leave Ayodhya and spend a period of exile in the forests of Dandaka and later Panchavati. Sita and Lakshmana willingly renounced the comforts of the palace and joined Rama in exile. The Panchavati forest became the scene for Sita's abduction by Ravana, King of Lanka. Ravana kidnapped Sita, disguising himself as a mendicant, while Rama was away fetching a golden deer to please her. Some versions of the Ramayana describe that Sita takes refuge with the fire-god Agni, while Maya Sita, her illusionary double, is kidnapped by the demon-king. Jatayu, the vulture-king tried to protect Sita but Ravana chopped off his wings. Jatayu survived long enough to inform Rama of what had happened.

Ravan took her back to his kingdom in Lanka, and Sita was held as a prisoner in one of his palaces. During her captivity for a year in Lanka, Ravana expressed his desire for her; however, Sita refused his advances and struggled to maintain her chastity. Hanuman was sent by Rama to seek Sita and eventually succeeded in discovering Sita's whereabouts. Sita gave Hanuman her jewellery and asked him to give it to her husband. However, Hanuman was caught by Lankan forces. As punishment for trespassing in Lanka and seeing Sita, Hanuman was punished by having his tail set on fire. As a result of his punishment and due to his superior strength, Hanuman was able to escape after his tail had been set on fire and he burnt down much of Lanka before returning across the sea to Rama.

Sita was finally rescued by Rama, who waged a war to defeat Ravana. Upon rescue, Rama makes Sita undergo a trail by fire to prove her chastity. In some version of Ramayana, during this test the fire-god Agni appears in front of Rama and hands over him the real Sita and declares it was Maya Sita who was abducted by Ravana. The Thailand version of the Ramayana, however, tells of Sita walking on the fire, of her own accord, to feel clean, as opposed to jumping in it. She is not burnt, the coals turn to lotuses.[citation needed] 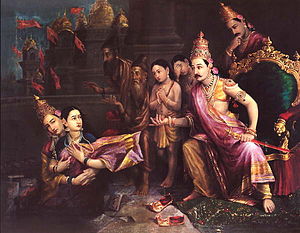 Sita returns to the Earth's womb with her mother as Sri Rama, her sons and sages watch in astonishment.

The couple came back to Ayodhya, where Rama was crowned king with Sita by his side. While Rama's trust and affection for Sita never wavered, it soon became evident that some people in Ayodhya could not accept Sita's long captivity under Ravana. During Rama's period of rule, an intemperate washerman, while berating his wayward wife, declared that he was "no pusillanimous Rama who would take his wife back after she had lived in the house of another man". This statement was reported back to Rama, who knew that the accusation of Sita was baseless. Nevertheless, he would not let slander undermine his rule, so he sent Sita away.

Thus Sita was forced into exile a second time. Sita, who was pregnant - was given refuge in the hermitage of Valmiki, where she delivered twin sons named Kusha and Lava.[2] In the hermitage, Sita raised her sons alone, as a single mother.[15] They grew up to be valiant and intelligent, and were eventually united with their father. Once she had witnessed the acceptance of her children by Rama, Sita sought final refuge in the arms of her mother Bhūmi. Hearing her plea for release from an unjust world and from a life that had rarely been happy, the Earth dramatically split open; Bhūmi appeared and took Sita away.

Speeches in the Ramayana

While the Ramayana mostly concentrates on Rama's actions, Sita also speaks many times during the exile. The first time is in the town of Chitrakuta where she narrates an ancient story to Rama, whereby Rama promises to Sita that he will never kill anybody without provocation.

The second time Sita is shown talking prominently is when she speaks to Ravana. Ravana has come to her in the form of a mendicant and Sita tells him that he doesnot look like one.

Some of her most prominent speeches are with Hanuman when he reaches Lanka. Hanuman wants an immediate union of Rama and Sita, and thus he proposes to Sita to ride on his back. Sita refuses as she does not want to run away like a thief; instead she wants her husband Rama to come and defeat Ravana to save her.

Sita is said to be the daughter of Ravana's queen Mandodari.[16] It was predicted that the first child of Mandodari would bring annihilation to the family. Hence, Ravana deserted the child when she was born.[17] The minister who was responsible for this took her in a pearl-box, placed her near a plough and told Janaka of Mithila that the girl is born from the trench. Janaka's queen Dharini became Sita's foster mother.[18]

There is also a narration about Sita's brother Bhamandala. He did not know about Sita being his sister and wanted to marry her. He even wanted to abduct her.[19] This narration ends when Bhamandala, after knowing that Sita is his sister, turns into a Jain ascetic.[19]

A female deity of agricultural fertility by the name Sita was known before Valmiki's Ramayana, but was overshadowed by better-known goddesses associated with fertility. According to the Ramayana, Sita was discovered in a furrow when Janaka was ploughing. Since Janaka was a king, it is likely that ploughing was part of a royal ritual to ensure fertility of the land. Sita is considered to be the child of the Mother Earth, produced by the union between the king and the land. Sita is a personification of the Earth's fertility, abundance, and well-being.

Swami Vivekananda states that Rama is considered the type of the Absolute, and Sita that of Power.Sita is the ideal of a woman in India and worshipped as God incarnate.[20] 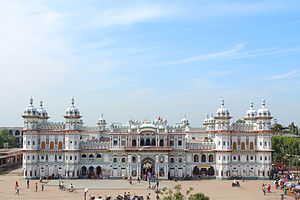 Janaki Mandir of Janakpur, Nepal a center of pilgrimage where the wedding of Sri Rama and Sita took place and is re-enacted yearly as Vivaha Panchami.

Sita has been a much revered figure amongst the Hindus. She has been portrayed as an ideal daughter, an ideal wife, and an ideal mother in various texts, stories, illustrations, movies and modern media. Sita is often worshipped with Rama as his consort. The occasion of her marriage to Rama is celebrated as Vivaha Panchami.

The actions, reactions and instincts manifested by Sita at every juncture in a long and arduous life are deemed exemplary. Her story has been portrayed in the book Sitayanam.[21] The values that she enshrined and adhered to at every point in the course of a demanding life are the values of womanly virtue held sacred by countless generations of Nepalese and Indians. 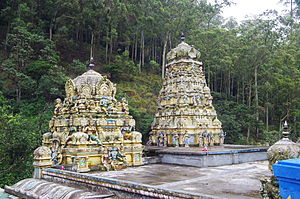