Skadovsk (Ukrainian: Скадовськ, translit. Skadovs’k) is a port city on the Black Sea in the Kherson Oblast (province) of southern Ukraine. It is the administrative center of the Skadovsk Raion (district). 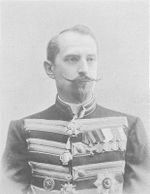 The town was founded in 1894 by Sergey B. Skadovsky, a member of the State Council of the Taurida Governorate during the Russian Empire. Skadovsky was a hydrobiologist and biochemist.[1]

The town was originally a seaport for sending wheat, wool and furs to France, Germany and other European countries. The initial territory consisted of a Tatar fishing village Ali-Agok (Tatar for "quiet harbor") and the lands owned by Skadovsky. He and his wife are buried in Skadovsk.

Skadovsk is a tourist destination for people in Ukraine, Russia, Belarus, and Poland. It is located on Dazharylhach Bay across from Dzharylhach Island.

In 2009, leading up to the Ukrainian presidential election, organizers of the Black Sea Games in Skadovsk presented Prime Minister Yulia Tymoshenko with a Bengal albino tigress named Tiger-Yulia. [2]

For more details on this topic, see Port of Skadovsk.

The city has a small port with few piers. Additionally there are more piers located in a village of Khorly in the eastern portion of Dzharylhach Bay. However piers of Khorly are not in operational conditions. Port of Skadovsk also administers a smaller port in Henichesk located in the sea of Azov.