From Infogalactic: the planetary knowledge core
Jump to: navigation, search
For other uses, see Skolkovo. 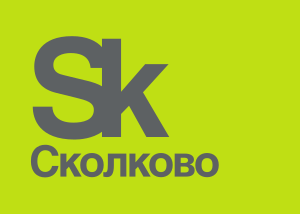 The logo of Skolkovo

The Skolkovo Innovation Center is a high technology business area that is being built built at Skolkovo near Moscow, Russia.[1][2][3] The site aims to be a highly modern complex created to encourage science and technology companies.[citation needed] Although historically Russia has been successful with development of science and technology, its lack of entrepreneur spirit led to government intervention of patents and nonproliferation of Russian tech companies beyond the scope of regional service. This site is tasked with the development of technology start-ups but also marketing them correctly. As corporations and individuals become "residents" of the city, with proposed projects and ideas receiving financial assistance.[4] Skolkovo was first announced on 12 November 2009 by then Russian president Dmitry Medvedev.[5] The complex is headed by Viktor Vekselberg and co-chaired by former Intel CEO Craig Barrett.

The scheme of work 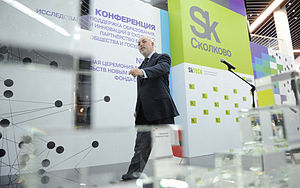 Viktor Vekselberg, head of the Skolkovo Institute of Science and Technology

In March 2010 Vekselberg announced the necessity of developing a special legal order in Skolkovo and emphasized the need to offer a tax holiday lasting 5–7 years.[6]

In May 2010 Dmitry Medvedev introduced two bills regulating working conditions in Skolkovo. The bills were adopted by the State Duma in September of that year[8] and, on 28 September 2010, the President of the Russian Federation signed the bills into federal law.[9][10]

On 20 August 2010 a new government decree regulating visas for participants of the Skolkovo project was published. According to this decree, specialized and highly skilled foreign nationals who arrive in Russia with the purpose of securing employment at Skolkovo will be granted a visa for a term of up to 30 days. In the event of successful job placement they can then obtain a work visa for a term of 3 years.[12]

A new highway was opened connecting Skolkovo to the MKAD in June 2010.[13] Railway transport will be available via Belorussky Rail Terminal and Kiyevsky Rail Terminal. A link to Vnukovo International Airport is also planned.

The IT cluster is tasked with creating an effective model for successful commercialization of IT technologies in Russia. Over 450 companies have signed up for the IT cluster.[17]IT ecosystem includes over 50 fast growing cyber-security startup companies with more than 700 employees in total

The Energy Efficient Technologies cluster aims to introduce breakthrough technologies focused on the reduction of energy consumption by industrial, housing and municipal infrastructure facilities. Today over 80 companies are on board for the energy efficiency cluster.[18]

The strategic goal of this cluster is to create an ecosystem for biomedical innovation. In order to achieve this goal, the best practices of leading biotechnology and biomedical research centers were studied. More than 215 companies have signed on for the Biomedical Technologies cluster.[20]

The Space Technology and Telecommunications cluster is intended to strengthen Russia's position in the respective industries. The scope of activity is wide: from space tourism to satellite navigation systems. Russian companies aim to increase their market share in this global market, the total volume of which is estimated at $300 billion.[21]

There are good examples of cooperation between the clusters. For example, in 2012 clusters of Information Technologies and Biomedical Technologies organized joint contest on Mobile Diagnostic Device "Skolkovo M.D."[22] and FRUCT was named the contest winner.

The main elements of The City are the University and a Technopark. The City will also feature a Congress Center, office buildings, laboratories, fitness centers and stores. An efficient rail transport and a logistically optimized layout will enable commuters to reach the center of Moscow within 40 minutes. The City will measure roughly 400 hectares and have a permanent population of 21,000. Employees, including commuters from Moscow and surrounding regions, will comprise about 31,000 people.[23]

Skolkovo is an energy efficient city with minimal or zero emissions of environmentally harmful substances that ensures the total recycling of household and municipal waste. At least 50% of the energy consumed by the city will come from renewable sources. The well-developed water system uses significantly less water by Russian standards without compromising comfort or hygiene. The transport system prioritizes walking and cycling. The use of vehicles with internal combustion engines is prohibited in the city. Energy passive and active buildings that do not require energy from the outside and even produce more energy than they consume will be built at Skolkovo. Household and municipal waste will be disposed of in the most environmentally friendly way possible – leveraging the use of plasma incinerator technology.[24]

In July 2012, IBM and five leading Russian innovation companies: the Skolkovo Foundation, Rusnano, Rostelecom, Russian Venture Company and ITFY, all signed a collaboration agreement to foster a culture of applied research and commercialization and attract key talent and investment from around the world in the area of microelectronics.

The agreement will give the Electronics Technology Center access to IBM’s intellectual property for chip design. IBM will also provide cloud computing technologies to form the basis of a new virtual design environment to be used to develop new microelectronic devices such as sensors to be used in smarter infrastructure projects, industry and consumer electronics.

“IBM is leading the way in collaborative innovation,” said Kirill Korniliev, General Manager, IBM Russia & CIS. “The ETC will use cloud technology to create a virtual working environment that brings together Russian innovation leaders where they can acquire, use and share design knowledge and spur a new wave of microelectronic innovation.”

"We are working with IBM to create an R&D ecosystem to kick start a new era in microelectronic devices design. Leveraging the latest cloud computing technologies, the Electronics Technology Center will provide customers with access to cutting-edge electronics technologies, design automation tools and specialist knowledge regardless of where they are geographically located," said Evgeny Babayan, Chairman of the Board, ITFY.

The ETC will initially focus on microelectronics design; however in the future it may be extended to other fields where cloud computing can support collaborative development projects.[25]

Skolkovo's Open University (OpUS) isn't an educational institution in the typical sense of the word, because graduating students don't receive a diploma. Instead, OpUS is a source of prospective Masters and PhD candidates, for the Skolkovo University of Science and Technology (SkTech), and interns for Skolkovo partner companies. The educational plan of OpUS includes lecture series, master classes and courses by leading scientists, thinkers and practitioners. Students acquire knowledge in the priority research and development areas of Skolkovo (information technology, biomedicine, energetics, space and nuclear technology). In addition, they have an opportunity to gain knowledge in academic and innovative competencies (foresight, forecasting, thinking, projecting), entrepreneur competence, experience in teamwork on projecting and solving inter-disciplinary problems.[26]

OpUS was opened on 21 April 2011 in Moscow. Selection for Winter 2011-2012 students was carried out in Saint Petersburg and Tomsk. There are currently more than 250 students enrolled in OpUS.