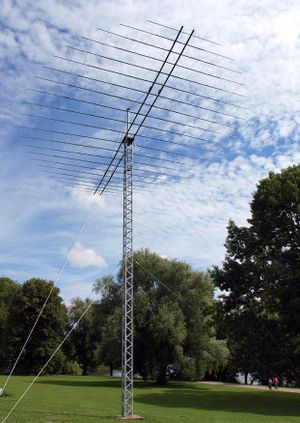 Skulptur Projekte Münster (English: Sculpture Projects Münster) is an exhibition of sculptures in public places in the town of Münster (Germany). Held every ten years since 1977, the exhibition shows artworks for free in different places all over the town, thereby confronting art with public places.

The story of the Sculpture Projects in Münster goes back to the 1970s when George Rickey placed his kinetic sculpture, ”Drei rotierende Quadrate” in the German city of Münster. At the time there was a significant public outcry against placement of the artwork. To address this dissatisfaction and to attempt to bridge understanding about art in public places, Klaus Bussmann (then director of the Westfälisches Landesmuseum in Münster) undertook a series of lectures and presentations in 1977 at the museum.

It was as an extension of this outreach program that the idea for Sculpture Projects Münster was born with Bussmann and Kasper König (curator at Museum Ludwig) as the project’s founders. Although protests of the project followed in latter years, the citizens of Münster eventually came to embrace the project, and are quite proud of it today, celebrating its presence in the city, as well as understanding the economical benefit it brings to this rather small college town. Some 35 works that premiered at previous Sculpture Projects were subsequently bought by the city.[1] The 100-day event has taken place every 10 years since 1977 and is coordinated to occur concurrent with the Documenta exhibition, which takes place in Kassel, Germany, some 200 km or 125 miles away. The curatorial committee of the Sculpture Projects rotates with each of its manifestations and is meant to highlight the best example of sculptural artworks and installations from a worldwide selection of artists. Each artist then chooses a site in the city, and conceives a work with that site firmly in mind. The most recent manifestation of the Sculpture Projects, in the summer of 2007, was co-curated by Brigitte Franzen, Kasper König, and Carina Plath.

For the prominent Roman Catholic city of Münster, from which busloads of citizens visit Lourdes each year, German artist Katharina Fritsch produced a yellow life-size plaster version of the Lourdes Madonna in 1987. Shortly after the piece was installed on a street near the shopping center, market and cathedral, the praying hands were smashed; shortly after it was taken to the police station, it received gifts of flowers. The work is now being made in stone.[2] Bruce Nauman first proposed his inverted pyramid, sunk into the ground in front of the University of Münster's Department of Nuclear Physics, for the first Münster project, in 1977. Rejected by the State Building Authority, in 2007 Nauman offered his original proposal once more for the original 1977 price.[3]

Unlike most art exhibitions Münster Sculpture Projects does not entirely disappear at the closing date. A total of 39 works from previous Sculpture Projects remain in place, creating an argumentative walk-through history of site-specific sculpture, public art and monuments.[4]