Sulaymaniyah (Central Kurdish: سلێمانی, Silêmanî; Arabic: السليمانية‎‎, as-Sulaymāniyyah), also called Sulaimani or Slemani, is a city in Iraqi Kurdistan. Sulaymaniyah is surrounded by the Azmer Range, Goyija Range and the Qaiwan Range in the northeast, Baranan Mountain in the south and the Tasluja Hills in the west. The city has a semi-arid climate with very hot dry summers and cool wet winters. Sulaymaniyah served as the capital of the historic Kurdish principality of Baban from 1784 to 1850.

The modern city of Sulaymaniyah was founded on 14 November 1784 by the Kurdish prince Ibrahim Pasha Baban who named it after his father Sulaiman Pasha.[3] Because it was founded as the capital of a powerful Kurdish principality, Sulaymaniyah has developed into a large city with a population of more than 1,500,000 people.[citation needed] It is an important economic center for northern Iraq and has been named the cultural center for Sorani-speaking Kurds continuously since 1992.[citation needed]

The region of Sulaymaniyah was known as Zamwa prior to the foundation of the modern city in 1784. The capital of the Kurdish Baban principality (1649–1850), before Sulaymaniyah was a territory named "Qelaçiwalan". At the time of the Babani's rule there were major conflicts between the Safavid dynasty and the Ottoman Empire. Qelaçiwalan became a battleground for the two rivals.[6]

Being of strategic importance and lying deep inside Safavid territory, there was concern that Qelaçiwalan would be attacked and captured if the Babanies did not give the Safavids military support, as both Sultan Mahmud II and Nader Shah were trying to gain the support of the dispersed Kurdish Emirates.[6] This obliged Mahmud Pasha of Baban in 1781 to think about moving the center of its Emirate to another safer place. He chose Melkendî, then a village but now a district in central Sulaymaniyah, to construct a number of Serahs for his political and armed units.[6]

In 1783, Ibrahim Pasha of Baban became ruler of the Emirate and began the construction of a new city which would become the capital of the Baban Emirate. In 1784 he finished erecting a number of palaces for trade called Qeyserîs and bazaars, which were also used as baths, and began inviting people from the surrounding villages and Emirates to move to the newly established city. Soon Melkendî, which was originally intended to be the city itself, instead became one of its quarters and still is today.[6] 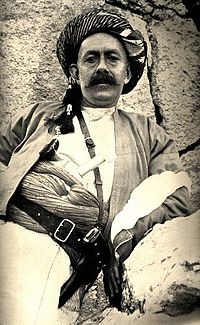 Mahmud Barzanji was the self-declared king of the Kingdom of Kurdistan from 1922–1924.

The British occupation declared Sheikh Mahmud king in order to persuade the residents of Sulaymaniyah to stop their rebellion, but Sheikh Mahmud ruled independently from the British and wanted them out of the kingdom. As a result, in the same year he was exiled for several years to the Andaman islands in India by the British, only to return and raise another unsuccessful rebellion in 1923, centered in Sulaymaniyah.

In January 1926 the League of Nations gave the mandate over the territory to Iraq, with the provision for special rights for Kurds. In 1930-1931, Sheikh Mahmud Barzanji made his last unsuccessful attempt to free Kurdistan. He retreated into the mountains and later signed a peace accord with the Iraqi government and settled in the new Iraq in 1932.

The first and oldest neighborhood in the city is called "Goizha" (Kurdish: Goyija), which was named after the mountain overlooking the city. Sabûnkaran was of the city's first neighborhoods; its name means "those who make soap" in Kurdish and its residents were mainly involved in the soap industry. Cûlekan, the Jewish neighborhood, was mainly inhabited by Kurdish Jews. In the 1950s, after the establishment of the state of Israel, most of its inhabitants migrated to the newly created state.

On 23 April 1982, during the Iran-Iraq War, a demonstration broke out in the city against the arrests and torture of the city's youths who were accused of planning a revolt against the ruling Arab Ba'ath regime.[citation needed]

Following the Gulf War, a series of nationwide uprisings broke out across Iraq against the Ba'athist rule, including the 1991 uprising in Sulaymaniyah, led by the Kurdish separatist parties KDP and PUK. Since its successful liberation in 1991, Sulaymaniyah has been administered by the Kurdish Government (KRG) and serves as a principal metropolis of northern Iraq.

In February 2011 multiple demonstrations took place in Sulaymaniyah against corruption and lack of services. The protest escalated and lasted for more than 40 days causing clashes between security forces and demonstrators until an eventual crackdown on the demonstrators left 10 dead and several hundred wounded.

The Assyrian community in the city is relatively new and has been small; there are several Assyrian churches in the city. 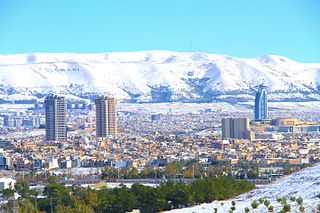 The city is located in northern Iraq. Of the main population centers in the country, it is characterized by its cooler summer temperatures and its rainier winters. Average temperatures range from 0 °C (32 °F) to 39 °C (102 °F). In the winters, there can be a significant amount of snow. The city is actually known as the "windy city" in the region, due to the mountains that surround it. To the north, there are Goizha mountains and to the south the Chwarta, forcing the air in the city to be condensed and compacted and often quite rainy.

Public education is free from primary school until graduation from university. The University of Sulaymaniyah was opened in 1968 with instruction in Kurdish, Arabic, and English. It has faculties in engineering, agriculture, the arts, science, and medicine. It is the largest university in South Kurdistan.

In 2007 The American University of Iraq – Sulaimani,[17] (AUI-S) was a new addition to the American universities in the Middle East, holding its first classes in October 2007. Instruction is in English only.

The Komar University of Science and Technology,[18] (KUST) - Sulaymaniyah was established and licensed by the Ministry of High Education and Scientific Research in Kurdistan Region Government, by the official letter no. 17867/7 on 18 October 2009. KUST is a private university governed by a Board of Trustees and run by an Administration Council. Its main campus is located in Sulaymaniyah. KUST offered its first teaching classes in 2010 with an English language summer course (levels 1 and 3).[19] 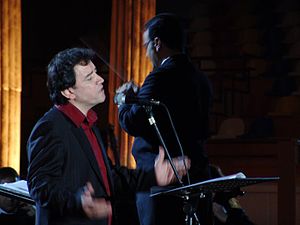 Sulaymaniyah is considered the center of the Sorani Kurdish culture in Kurdistan. It is recognized officially as the cultural capital of South Kurdistan. Development of Sorani as a modern literary language started in this city in the early 19th century, when many Kurdish poets such as Nalî, Piramerd, Muhamed Amin Zaki, Abdulla Goran, Muhamad Salih Dilan, Ahmad Hardi, Ibrahim Ahmad, Nuri Sheikh Salih Sheikh Ghani Barzinji, Sherko Bekas, and Bachtyar Ali published their works.

The city is known for its open, relatively liberal and tolerant society when compared to other cities of Kurdistan. According to Al-Jazeera, the city has a Chinatown as a result of attracting foreign investment. Around 500 Chinese people reside in the city according to Al Arabiya.[20]

In 2006 the Movement for Change started in Sulaymaniyah and challenged what it called the "corrupt" and "nepotistic" Kurdish Government. The movement gained massive support from the city.

Sulaymaniyah is the only city in South Kurdistan that regularly celebrates world music day or Fête de la Musique. In one trip to the city, a journalist working for the BBC wrote about Sulaymaniyah's distinct culture: "Culture is hugely important to the Kurdish people, especially in Sulaymaniyah, but there is a strong pull to the west--modernisation and consumerism--driven perhaps by the satellite televisions they have had access to since they started running their own affairs...And at the university, students mill around the campus, chattering with each other and doing some last-minute cramming for their exams. The war only stopped lectures for a few weeks. There are probably more women than men and they are happy to air their views to anyone who asks."[23]

The Sulaymaniyah Governorate has much fertile land such as the Sharazur and Bitwen plains which are considered two of the most fertile plains in the Middle East. Historically, Sulaymaniyah was mainly agricultural and one of the major suppliers of wheat and other agricultural products. Its role declined due to the policies of Saddam Hussein aimed at reducing the city's economic potential as it was a center of the Kurdish revolution.

Since 2003 Iraq has seen a huge economic boom. Sulaymaniyah's economy today relies on tourism, agriculture[24] and a number of small factories, most of which are involved in the building trade.

In 2004 the Comprehensive Food Security and Vulnerability Analysis in Iraq released an in-depth survey of the Sulaymaniyah Governorate in which they surveyed each city. In this survey one can see the economic boom of 2003 mentioned earlier.[25] 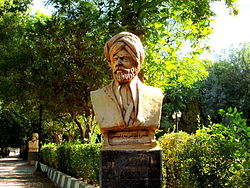 The city was visited by more than 60,000 tourists in 2009.[26] Sulaymaniyah attracted more than 15,000 Iranian tourists in the first quarter of 2010, many drawn by the fact it is not subject to strict laws faced at home. Newroz 2010 drew an exodus of Iranian tourists choosing to celebrate the event in the region.[27]

In Sulaymaniyah you are surrounded by a variety of business venues and tourist attractions that bring delegates and tourists to this region every year. Combined with the comforts and convenience of the Millennium & Copthorne Hotels and you have yourself an exhilarating package of choosing among three fascinating hotels: Grand Millennium Sulaimani; Millennium Kurdistan Hotel and Spa, a 5 star hotel; Copthorne Hotel Baranan a 4 star hotel. There are many modern hotels in Sulaymaniyah such as the High Crest Hotel, the Ramada Hotel, the Areen Hotel which overlooks the Azadi park and the mountain of Azmar, and the Sulaymaniyah Palace Hotel. 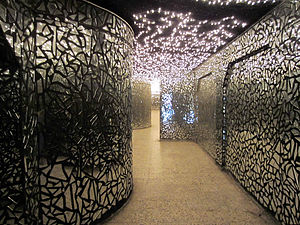 Victims of one of Saddam Hussein's campaigns are represented by broken glass and tiny lights at the Amna Suraka Museum (Kurdish: "Red Intelligence Museum") in Sulaymaniyah.

Sulaymaniyah is the partial setting in the young adult novel Kiss the Dust.