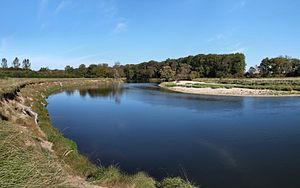 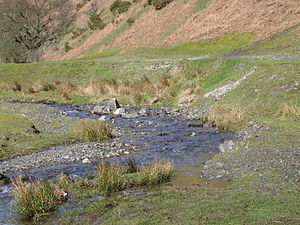 The depositional slip-off slope is on the left and a small river cliff on the right. River Ashes Hollow, UK.

The slip-off slope is the inside bank of a meander on a river where sedimentary material is deposited as a result of the slower flow rate.[1] It is on the opposite side of the channel to a river-cut cliff or cut bank which is formed by the erosive forces of the stronger current on that side. The terms are used in connexion with the formation of meanders on a river.

Deposition on the slip-off slope occurs due to the helical flow in meandering reaches that is constantly transferring sediment from the undercut slope on the outside of the meanders to the inside river banks.[2]

The deposition of material on the slip-off slope often results in the formation of a point bar.

Erosion processes cause the bends in a river to migrate over the course of time. If two cut banks are eroded over time until they meet, the river cuts through the neck, usually leaving an oxbow lake.