Sloboda Ukraine (literally: Borderland of free frontier guards, Russian: Слободская Украина, Слобожанщина, translit. Slobodskaya Ukraina, Slobozhanshchina; Ukrainian: Слобiдська Україна, Слобожанщина, translit. Slobids'ka Ukraine, Slobozhanschyna) is a historical region which formed a borderland of Muscovite Russia. It developed and flourished in the 17th and 18th centuries on the southwestern frontier of the Tsardom of Russia. In 1765 it was converted into the Sloboda Ukraine Governorate.

The name derives from the word sloboda, which means free settlement without taxes obligations. In Russia, the name "Ukraine" (Russian: Ukraina) is perceived as a calque of okraina, meaning a frontier (krai), thus Sloboda Ukraine is known as a "free-settled frontier". In Ukraine, the region is accepted as a free settled region, part of the whole Ukraine.

Muscovite Russia gained control over the territory as the result of conquests against the Grand Duchy of Lithuania during the Muscovite–Lithuanian Wars in the 16th century.

The Russia historiography claims that the Crimean Tatars and Nogai Tatars traditionally used the sparsely inhabited area of the Wild Fields on the south border of Muscovite Russia immediately south of Severia to launch annual raids into Russian territories along the Muravsky Trail and Izyum Trail. During those raids the most suffered regions near Ryazan and along Oka River. With the Russian territorial expansion south and east into the lands of modern Sloboda Ukraine and mid Volga River the conflict however intensified. Sometime between 1580s and 1640s in Sloboda Ukraine started to be built the Belgorod Defense Line with number of fortifications, moats, and forts that provided security to the region. After a number of Russo-Crimean Wars, the Russian monarchs started to encourage the settlement of the region by the Cossacks who acted as a sort of frontier guard force against the raids of the Tatars. 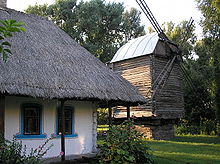 Apart from the Cossacks, the settlers included peasants and townspeople from Right and Left-bank Ukraine, divided by the Treaty of Andrusovo in 1667. The name Sloboda Ukraine derives from the word sloboda, a Slavic term meaning "freedom" (or "liberty)", and also the name of a type of settlement. The Tsar would free the settlers of a sloboda from the obligation of paying taxes and fees for a certain period of time, which proved very enticing for settlers. By the end of the 18th century, settlers occupied 523 slobodas (slobody) in Sloboda Ukraine.

From 1650 to 1765, the territory referred to as Sloboda Ukraine became increasingly organized according to Cossack military custom, similar to that of the Zaporozhian Host and Don Host. The relocated cossacks became known as Sloboda Cossacks. There were five regimental districts (polki) of Sloboda Cossacks, named after the towns of their sustained deployment, and subdivided into company districts (sotni). Regional centers included Ostrogozhsk, Kharkiv, Okhtyrka, Sumy, and Izyum, while the Sloboda Ukraine Cossack capital was located in Sumy until 1743. 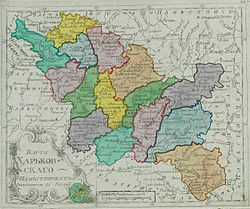 The administration of Catherine the Great disbanded the regiments of Slobozhanshchina and abolished Cossack privileges by the decree of July 28, 1765.[1] The semiautonomous region became a province called Sloboda Ukraine Governorate (Slobodsko-Ukrainskaya guberniya).[1][2] Saint Petersburg replaced the regimental administrations with Russian hussar regiments,[1] and granted Cossack higher ranks (starshinas) officership and nobility (dvoryanstvo). In 1780, the governorate was transformed into the Kharkov Viceroyalty (namestnichestvo) which existed until the end of 1796, when it was again renamed into Sloboda Ukrainian Governorate.[2] Each administrative reform involved territorial changes.

In 1835 the province of Sloboda Ukraine was abolished, ceding most of its territory to the new Kharkov Governorate, and some to Voronezh and Kursk, which came under the Little Russian General Governorship of Left-bank Ukraine.[1] Soviet Ukraine reorganized the region several times before establishing the borders of present-day Kharkiv Oblast in 1932.

The territory of historic Sloboda Ukraine corresponds to the territory of the present-day Ukrainian oblast (province) of Kharkiv (in its entirety), and parts of the Sumy, Donetsk, and Luhansk Oblasts, as well as parts of the Belgorod, Kursk, and Voronezh Oblasts of Russia.[1]