From Infogalactic: the planetary knowledge core
Jump to: navigation, search
For other uses, see Slogan (disambiguation). 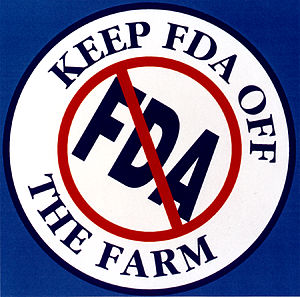 In 1995, FDA's assertion of authority to regulate tobacco drew heavy opposition from the tobacco community, which erupted into lawsuits and slogans urging "Keep FDA Off the Farm."

A slogan is a memorable motto or phrase used in a political, commercial, religious, and other context as a repetitive expression of an idea or purpose.

The word slogan is derived from slogorn which was an Anglicisation of the Scottish Gaelic and Irish sluagh-ghairm (sluagh "army", "host" + gairm "cry").[1] Slogans vary from the written and the visual to the chanted and the vulgar. Their simple rhetorical nature usually leaves little room for detail and a chanted slogan may serve more as social expression of unified purpose than as communication to an intended audience.

"Sloganeering" is a mostly derogatory term for activity which degrades discourse to the level of slogans.[better source needed]

Slogans are used to convey a message about the product, service or cause that it is representing. It can have a musical tone to it or written as a song. Slogans are often used to capture the attention of the audience it is trying to reach. If the slogan is used for commercial purposes, often it is written to be memorable/catchy in order for a consumer to associate the slogan with the product it is representing.[3][4] A slogan is part of the production aspect that helps create an image for the product, service or cause it's representing. A slogan can be a few simple words used to form a phrase that can be used in a repetitive manner. In commercial advertising, corporations will use a slogan as part of promotional activity.[4] Slogans can become a global way of identifying good or service, for example Nike's slogan 'Just Do It' helped establish Nike as an identifiable brand worldwide.[5]

Slogans should catch the audience's attention and influence the consumer's thoughts on what to purchase.[6] The slogan is used by companies to affect the way consumers view their product compared to others. Slogans can also provide information about the product, service or cause its advertising. The language used in the slogans is essential to the message it wants to convey. Current words used can trigger different emotions that consumers will associate that product with.[6] The use of good adjectives makes for an effective slogan; when adjectives are paired with describing nouns, they help bring the meaning of the message out through the words.[7] When a slogan is used for advertising purposes its goal is to sell the product or service to as many consumers through the message and information a slogan provides.[8] A slogan's message can include information about the quality of the product.[8] Examples of words that can be used to direct the consumer preference towards a current product and its qualities are: good, beautiful, real, better, great, perfect, best, and pure.[9] Slogans can influence that way consumers behave when choosing what product to buy.

Slogans offer information to consumers in an appealing and creative way. A slogan can be used for a powerful cause where the impact of the message is essential to the cause.[10][11] The slogan can be used to raise awareness about a current cause; one way is to do so is by showing the truth that the cause is supporting.[11] A slogan should be clear with a supporting message. Slogans, when combined with action, can provide an influential foundation for a cause to be seen by its intended audience.[12] Slogans, whether used for advertising purpose or social causes, deliver a message to the public that shapes the audiences' opinion towards the subject of the slogan