From Infogalactic: the planetary knowledge core
Jump to: navigation, search
For assistance with IPA transcriptions of Slovak for Wikipedia articles, see Help:IPA for Slovak.

This article is about the phonology and phonetics of the Slovak language. 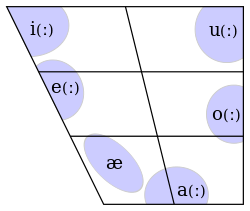 Ranges for Standard Slovak monophthongs, from Pavlík (2004:95). Rounded front vowels are not shown.

Some additional notes includes the following (transcriptions in IPA unless otherwise stated):

In the standard language, the stress is always on the first syllable of a word (or on the preceding preposition, see below). This is not the case in certain dialects. Eastern dialects have penultimate stresses, which at times makes them difficult to understand for speakers of standard Slovak. Some of the north-central dialects have a weak stress on the first syllable, which becomes stronger and moves to the penultimate in certain cases. Monosyllabic conjunctions, monosyllabic short personal pronouns and auxiliary verb forms of the verb byť (to be) are usually unstressed.

Prepositions form a single prosodic unit with the following word, unless the word is long (four syllables or more) or the preposition stands at the beginning of a sentence.

Slovak linguists do not usually use IPA for phonetic transcription of their own language or others, but have their own system based on the Slovak alphabet. Many English language textbooks make use of this alternative transcription system. In the following table, pronunciation of each grapheme is given in this system as well as in the IPA.

The sample text is a reading of The North Wind and the Sun. The transcription is based on a recording of a 28-year-old female speaker of Standard Slovak from Bratislava.[50]