Slovenian Air Force and Air Defence is a part of the Slovenian Armed Forces. It is an integral part of the command structure, not an independent branch.

Slovenian Air Force and Air Defence aim is securing sovereignty of the air space of the Republic of Slovenia and providing air support to other services in implementation of their tasks in joint operations. Its main tasks are:

Since Slovenia does not have the air capabilities to police its airspace in accordance with NATO standards, nor does it plan to develop such capabilities these task are performed alternately by the Italian and Hungarian Air Forces under NATO command.[1] 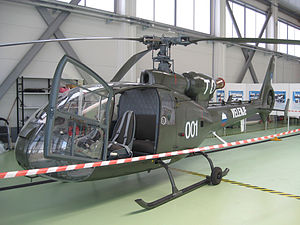 A former SOKO SA341 Gazelle on display at Cerklje air base

Slovenian contact with military aviation began during World War I, when the army and navy air services of Austria-Hungary conscripted large numbers of personnel from throughout the Empire. As the Empire began to collapse during 1918, Slovenian aircrew and ground crew switched their allegiance to the Kingdom of Serbs, Croats and Slovenes. Aircraft found on Slovenian territory were taken over by the Slovenian authorities and formed into a fledgling air arm. The new air arm was soon involved in the conflict with Austria over the border provinces of Carinthia and south Styria. Later in 1919, the Slovenian air units were absorbed into the Royal Yugoslav Air Force. In 1968 a reserve volunteer force, the Teritorialna Obramba (Territorial Defence of the Socialist Republic of Slovenia), was established to defend local key locations in time of crisis. The Slovenian Territorial Defence HQ had a small auxiliary aviation unit stationed at Ljubljana-Polje airfield by 1969, when Government Factories Type 522 advanced trainers were being operated. These aircraft were borrowed from the Yugoslav Air Force and not owned by Slovenia. Slovenian Territorial Defence ceased to be a part of the Yugoslavian auxiliary forces on 21 June 1991, (four days prior of the proclamation of independence), when the Yugoslav army seized 12 Soko J-20 Kraguj aircraft from them. On 28 June 1991 a Yugoslav Air Force Gazelle defected to Slovenia, providing the first helicopter for the Territorial Defence Force. During the war it also was equipped with three ex-Police Bell 412s and an Agusta A-109. On 9 June 1992 the Air Force Unit of the Slovenian Army was renamed into 15 Brigada Vojaskega Letalstva. The 15 Brigada was divided into two squadrons, one fixed-wing and one helicopter squadron, flying from two bases, Brnik airport and Cerklje ob Krki. The 15 Brigada was under control of the 1 Air Force and Air Defence Force Command located at Kranj. On 2004 Slovenia entered NATO. Now NATO is responsible for protecting Slovenian airspace. On 8 November 2004 the 15 Brigada was officially disbanded. In its place three new units were formed. The 15 Air Force Brigade was restructured into the 15 Helicopter Battalion, the Air Force School, and the Air Force Base. The 15 Helicopter Battalion is located at the Brnik air base. The unit is equipped with eight Bell 412 helicopters and four AS-532 Cougar helicopters. The units main duties are to organise training courses for pilots and technical staff, to organise search and rescue missions and operate within the System of Civil Protection, Help and Rescue, to secure cargo transportation to mountain areas, to extinguish fires, and to provide air support for SAF units. The Air Force Military School is located at the Cerklje ob Krki air base. The school conducts the basic and advance training programmes for future air force pilots in two Zlin 143L and eight Zlin 242L planes and four Bell 206 Jet Ranger helicopters, organises practices for air force pilots, provides fire support, and carries out various tasks for other branches of the armed forces by using the two PC-9 and nine PC-9M planes. A part of the Air Force Military School is also the parachute squad, located at the Brnik air base, which organises basic and advanced parachute training for SAF members. The Air Force Base, located at the Cerklje ob Krki air base, carries out logistic support, such as fuel supply. The unit is equipped with two PC-6 planes and one L-410 plane. The Air Force Base unites the air supply squad and the technical support unit whose main tasks are to plan and conduct the second stage of aircraft maintenance, carry out technical personnel training, update aircraft documentation, etc. Although the airborne part of the SAF only exists for fifteen years, it has adapted itself constantly to the changing world. In this light another restructuring is due in 2007 when the Air Force School and the 15 Helicopter Battalion will be subordinated to a single command making logistics easier, and reduce staff. Following the decision to operate jet aircraft from 2015 again, major restructuring will take place at Cerklje. 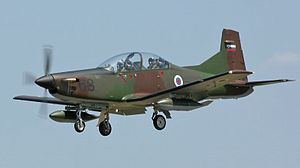 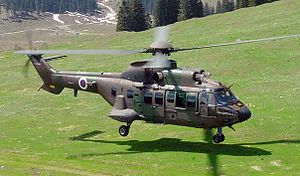 A Slovenian AS532 Cougar

Previous aircraft operated by the Air Force consisted of a single Agusta-Bell 212, an A.109A, and a Aérospatiale Gazelle helicopter which was lost to a crash in 1994.
Air Force also operated 14 UTVA 75 training aircraft. All have been replaced by the Zlin Z 242. Some UTVA 75’s were donated to local airclubs, but up to 6 remain stored in reserve.[4][5]

The Slovenian Ministry of Defense tested the EADS CASA C-295 and the C-27J Spartan in Cerklje AFB in 2007. Two Casa C-295's were chosen with the first one to be delivered in 2008 and the second in 2010. The first aircraft was ordered in January 2008, but in February the aircraft order was frozen, because of the Mirosławiec air accident in Poland. Due to the financial crisis now there is no near term plan for acquisition of new transport aircraft.

[6] In 1993 a UTVA-75 crashed in Slovenj Gradec. The plane was repaired. In 1994 a Let L-410 Turbolet hit HT wires on landing in Brnik. It was later repaired. In 2004 a Pilatus PC-9 crashed in Lenart, resulting in the death of maj. Drago Svetina. In 2008 a pilot candidate ejected from a Pilatus PC-9, the plane was not damaged and returned safely at Cerklje ob Krki Airbase.