From Infogalactic: the planetary knowledge core
Jump to: navigation, search
For other uses, see Slavyansk (disambiguation).

Sloviansk (Ukrainian: Слов'янськ, transliterated Slov”yans’k[1]; Russian: Славянск, translit. Slavyansk[2]) is a city of oblast significance in Donetsk Oblast, eastern Ukraine. It also serves as the administrative center of the Sloviansk Raion (district), though it does not belong to the raion. It was founded in 1676. The city was one of the focal points in the early stages of the 2014 pro-Russian conflict in Ukraine, but was evacuated by rebels and along with around a third of the population it was later retaken by Ukrainian forces in July 2014. Population: 117,445 (2013 est.)[3].

The city of Sloviansk was founded by Russian tsar Aleksey Mikhailovich in 1645 as a border fortress against the Crimean attacks and slave raids on the southern suburbs of the Russian State.[4] In 1676, a fortress named Tor was built at the confluence of the Kazenyy Torets and Sukhyy Torets Rivers where they form the Torets River, a tributary of Donets River.[5] Shortly thereafter, the town of Tor grew up next to the fortress.[4]

As several salt lakes were located close by, the town became a producer of salt. During the sixteenth century, salt production was the principal local industry, but during the eighteenth century, it became unprofitable and ceased on December 21, 1782.

In 1784, the city was renamed Sloviansk, and it became a part of the Kharkov Governorate of the Russian Empire in 1797. A resort was established on the shores of Lake Ropne in 1832.

The city was occupied by the Germans on October 28, 1941. In December 1941, SS Einsatzkommando 4b executed more than a thousand Jews who lived in the city. The Red Army expelled the Nazi occupiers on February 17, 1944.

On April 12, 2014, during the ongoing crisis following the 2014 Ukrainian revolution, masked men in army fatigues and bulletproof vests armed with Kalashnikov assault rifles captured the executive committee building, the police department, and SBU office in Sloviansk.[6] Ukrainian Interior Minister Arsen Avakov described the gunmen as "terrorists" and vowed to use the Ukrainian special forces to retake the building.[7][8]

On April 13, 2014, there were reports of fighting between the gunmen and Ukrainian troops, with casualties on both sides.[9][10] The BBC's David Stern described the pro-Russian forces as carrying Russian weapons and resembling the soldiers that took over Crimean installations at the start of the 2014 Crimean crisis.[9]

On May 29, 2014, a helicopter carrying fourteen army soldiers, including General Serhiy Kulchytskiy - the head of combat and special training for the country's National Guard, crashed after being shot down by militants near Sloviansk in East Ukraine. Ukraine's outgoing President Olexander Turchynov described the downing as a "terrorist attack," and blamed pro-Russian militants.[11]

The city was held by separatist forces until July 5, 2014, when pressed by the Ukrainian army they had to retreat from Sloviansk and pull back to Donetsk city.[12]

The climate in Sloviansk is a mild to warm summer subtype (Köppen: Dfb) of the humid continental climate. 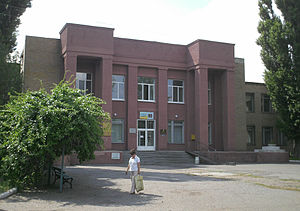 The principal industry of the city concerns machine building:

Currently the city is an important health resort providing spa treatments and mud baths using mud from the bottom of salt lakes located nearby. 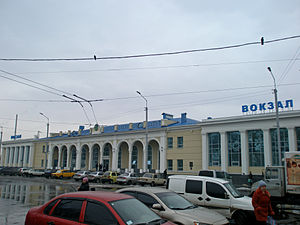 The city is a nexus of a number of railways and roads. There are three railway stations currently in use, one defunct. Three railway lines leave the city in directions of Lozovaya, Krasnyi Lyman and Kramatorsk. Ukrainian international highway

goes by the edge of the city and the national highway N-20 leaves from the city toward Mariupol. Local population is served by trolleybus network consisting of two permanent routes and one summer route. Marshrutkas are widely used. 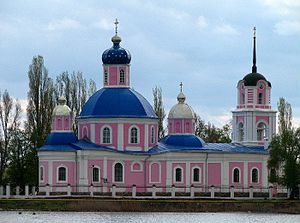