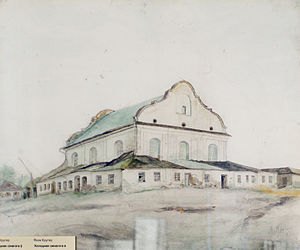 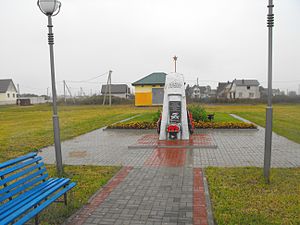 Memorial for the victims of february 1943,Monakhova Street in Slutsk 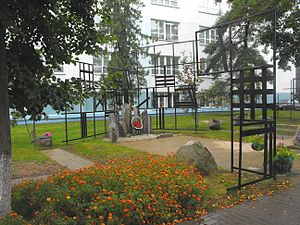 Memorial for the jews of the Slusk Ghetto, Kolyska Street in Slutsk

The Slutsk Affair refers to the massacre of thousands of Jews and others that occurred in Slutsk, Belarus in the Soviet Union, in October 1941, near the city of Minsk while under German occupation during World War II. The perpetrators were a combination of Gestapo special forces and Lithuanian allies of the Third Reich. Nearly 4,000 Jews were murdered over a two-day period along with thousands of non-Jews. The effect of the indiscriminate mass killing was to render the Belarus population opposed to their German occupiers.

The city of Slutsk had a large concentration of Jews as well as large numbers of Belarusians. Although the German government had previously signed a non-aggression pact (the Molotov-Ribbentrop Pact) with the Soviet Union, the Nazis, emboldened by success in western Europe, planned and executed Operation Barbarossa, and invaded their former ally on June 22, 1941. Along the way, the Nazis picked up a number of allies in satellite nations.

On October 27, 1941, four companies of military police stationed in Kaunas entered the city with the assignment of liquidating the city's Jewish population within two days. This "special security operation" was led by the Einsatzgruppen (death squads) of the SS, and acted without authorization from the local German civil administration and Security SS authorities that had marshaled various specialized workers from the population.

The Jews were surrounded, removed from their houses and assassinated en masse, in such a frenzy that not just Jews were murdered. The ethnic population in the area was also massacred. The German civil administration in Belarus was outraged, after having made great efforts to gain the favor of local population in accord with the instructions of the Führer.

Commissioner General of Belarus Wilhelm Kube wrote in protest to his supervisor and Reichsfuhrer Heinrich Himmler:

The town was a picture of horror during the action. With indescribable brutality on the part of both the German police officers and particularly the Lithuanian partisans, the Jewish people, but also among them Belarusians, were taken out of their dwellings and herded together. Everywhere in the town shots were to be heard and in different streets the corpses of shot Jews accumulated. The Belarusians were in greatest distress to free themselves from the encirclement.

I am submitting this report in duplicate so that one copy may be forwarded to the Reich Minister. Peace and order cannot be maintained in Belarus with methods of that sort. To bury seriously wounded people alive who worked their way out of their graves again is such a base and filthy act that the incidents as such should be reported to the Fuehrer and Reichsmarshal.[1]

Adolf Hitler, by all accounts, was never notified of the incident and thereafter mistakenly believed that Nazi partisans among the Belarusian population would support the Germans in the continuing invasion.