The walled city in the center of Smolensk (along with the outskirts) was destroyed several times throughout its long history because it was on the invasion routes of both Napoleon and Hitler. Today, Smolensk is noted for electronics, textiles, food processing, and diamond faceting.

The name of the city is derived from the name of the Smolnya River. The origin of the river's name is less clear. One possibility is the old Slavic word "смоль" (smol) for black soil, which might have colored the waters of the Smolnya. An alternative origin could be the Russian word "смола" (smola), which means resin, tar, or pitch. Pine trees grow in the area, and the city was once a center of resin processing and trade. The Byzantine emperor Constantine VII recorded its name as "Μιλινισκα" (Miliniska).[11]

The city is located in European Russia on the banks of the upper Dnieper River, which crosses the city within the Smolensk Upland, which is the western part of the Smolensk–Moscow Upland.The Dniepr River flows through the city from east to west and divides it into two parts: the northern (Zadneprove) and southern (center). Within the city and its surroundings the river takes in several small tributaries.

In the valleys are stretched streets, high ridges, hills, and headlands form the mountain. Smolensk is situated on seven hills (mountains).

The old part of the city occupies the high, rugged left (south) bank of the Dnieper River. The area features undulating terrain, with a large number of tributaries, creeks and ravines.

Smolensk is among the oldest Russian cities. The first recorded mention of the city was 863 AD, two years after the founding of ancient Rus'. According to Russian Primary Chronicle, Smolensk (probably located slightly downstream, at the archaeological site of Gnezdovo) was located on the area settled by the West Slavic Radimichs tribe in 882 when Oleg of Novgorod took it in passing from Novgorod to Kiev. The town was first attested two decades earlier, when the Varangian chieftains Askold and Dir, while on their way to Kiev, decided against challenging Smolensk on account of its large size and population. 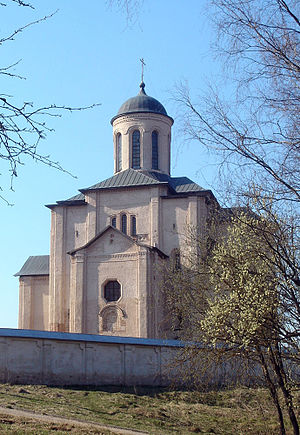 The first foreign writer to mention the city was the Byzantine Emperor Constantine Porphyrogenitus. In De Administrando Imperio (c. 950) he described Smolensk as a key station on the trade route from the Varangians to the Greeks. The Rus' people sailed from the Baltics up the Western Dvina as far as they could then they pulled their boats out onto the ground and dragged them along to the upper Dnieper. It was in Smolensk that they supposedly mended any leaks and small holes that might have appeared in their boats from being dragged on the ground and they used tar to do that, hence the city name.

The Principality of Smolensk was founded in 1054. Due to its central position amid Kievan Rus' lands, the city developed rapidly. By the end of the 12th century, the princedom was one of the strongest in Eastern Europe, so that Smolensk Dynasty frequently controlled the Kievan throne. Numerous churches were built in the city at that time, including the church of Sts. Peter and Paul (1146, reconstructed to its presumed original appearance after World War II) and church of St. John the Baptist (1180, also partly rebuilt). The most remarkable church in the city is called Svirskaya (1197, still standing); it was admired by contemporaries as the most beautiful structure to the east of Kiev.

Smolensk had its own veche since the very beginning of its history. Its power increased after the disintegration of Kievan Rus, and although it was not as strong as the veche in Novgorod, the princes had to take its opinion into consideration; several times in 12th and 13th centuries there was an open conflict between them.[12]

Between Russia, Lithuania, and Poland

Although spared by the Mongol armies in 1240, Smolensk paid tribute to the Golden Horde, gradually becoming a pawn in the long struggle between Lithuania and the Grand Duchy of Moscow. The last sovereign monarch of Smolensk was Yury of Smolensk; during his reign the city was taken by Vytautas the Great of Lithuania on three occasions: in 1395, 1404, and 1408. After the city's incorporation into the Grand Duchy of Lithuania, some of Smolensk's boyars (e.g., the Sapiehas) moved to Vilnius; descendants of the ruling princes (e.g., the Tatishchevs, Kropotkins, Mussorgskys, Vyazemskys) fled to Moscow. 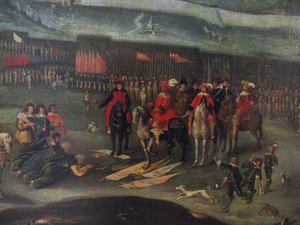 With tens of thousands of people living there, Smolensk was probably the largest city in 15th-century Lithuania. Three Smolensk regiments took part in the Battle of Grunwald against the Teutonic Knights. It was a severe blow to Lithuania when the city was taken by Vasily III of Russia in 1514. To commemorate this event, the Tsar founded the Novodevichy Convent in Moscow and dedicated it to the icon of Our Lady of Smolensk. 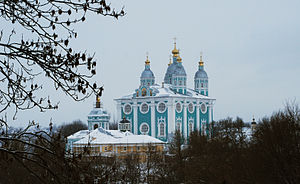 In order to repel future Polish–Lithuanian attacks, Boris Godunov made it his priority to heavily fortify the city. The stone kremlin constructed in 1597–1602 is the largest in Russia. It features thick walls and numerous watchtowers. Heavy fortifications did not prevent the fortress from being taken by the Polish–Lithuanian Commonwealth in 1611 after a long twenty-month siege, during the Time of Troubles and Dimitriads. Weakened Muscovy temporarily ceded Smolensk land to the Commonwealth in the Truce of Deulino and for the next forty-three years it was the seat of Smolensk Voivodeship.

To recapture the city, the Tsardom of Russia launched the so-called "Smolensk War" against the Commonwealth in 1632. After a defeat at the hands of king Wladislaw IV, the city remained in Polish–Lithuanian hands. In 1632, the Uniate bishop Lew Kreuza built his apartments in Smolensk; they were later converted into the Orthodox Church of Saint Barbara. The hostilities resumed in 1654 when the Commonwealth was being affected by the Khmelnytsky Uprising and the Swedish invasion. After another siege, on September 23, 1654, Smolensk was recaptured by Russia. In the 1667 Truce of Andrusovo, the Polish–Lithuanian Commonwealth finally renounced its claims to Smolensk. 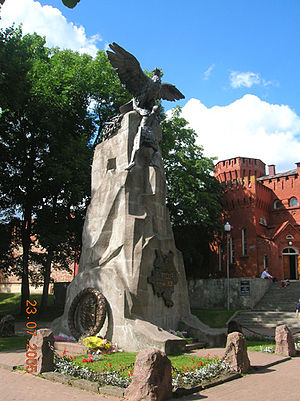 Eagles monument in Smolensk, commemorating the centenary of the Russian victory over Napoleon

Smolensk has been a special place to Russians for many reasons, not least for the fact that the local cathedral housed one of the most venerated Orthodox icons, attributed to St. Luke. Building the new Cathedral of the Assumption was a great project which took more than a century to complete. Despite slowly sinking into economic backwater, Smolensk was still valued by Tsars as a key fortress defending the route to Moscow. It was made the seat of Smolensk Governorate in 1708.

In August 1812, two of the largest armies ever assembled clashed in Smolensk. During the hard-fought battle, described by Leo Tolstoy in War and Peace, Napoleon entered the city. Total losses were estimated at 30,000 men. Apart from other military monuments, central Smolensk features the Eagles monument, unveiled in 1912 to mark the centenary of Napoleon's Russian campaign. 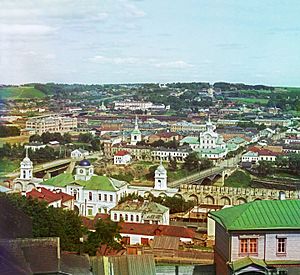 View of Smolensk in 1912. Early colour photograph by Sergei Prokudin-Gorskii

At the beginning of World War I, the 56th Smolensk Infantry Division was first assigned to the First Army of the Imperial Russian Army. They fought at the Battle of Tannenberg. It was subsequently transferred to the 10th Army and fought at the Second Battle of the Masurian Lakes. In March 1918, while the city remained a part of Russia, Belarusian People's Republic, proclaimed in Minsk under the German occupation, declared Smolensk a part of it. In February–December 1918, Smolensk was home to the headquarters of the Western Front, North-West Oblast Bolshevik Committee and Western Oblast Executive Committee. On January 1, 1919, the Byelorussian Soviet Socialist Republic was proclaimed in Smolensk, but its government moved to Minsk as soon as the German forces had been driven out of Minsk several days later.

After the Revolution, for inclusion in its composition as claimed Smolensk Belarusian People's Republic and the Byelorussian SSR. Since April 1918 Smolensk was the center of the Western Region, which is based on January 1, 1919, Byelorussian SSR was formed. January 7 BSSR government moved from Minsk and Smolensk already January 16, 1919 decision of the Central Committee of the RCP Smolensk region was transferred to the RSFSR. In 1920 was held the new provincial census, according to which the Russian population prevailed over Belarus, but the Belarusian party leadership until 1926 leaves no hope for the inclusion of Smolensk in the Belorussian SSR. In 1940, 18 km (11 mi) from Smolensk, the Katyn Massacre occurred.

During World War II, Smolensk once again saw wide-scale fighting during the first Battle of Smolensk when the city was captured by the Germans on July 16, 1941. The first Soviet counteroffensive against the German army was launched in August 1941 but failed. However, the limited Soviet victories outside the city halted the German advance for a crucial two months, granting time to Moscow's defenders to prepare in earnest. Camp 126[further explanation needed] was situated close to Smolensk and at this time Boris Menshagin was mayor of Smolensk, with his deputy Boris Bazilevsky. Both of them would be key witnesses in the Nuremberg Trials over the Katyn massacre.[13] Over 93% of the city was destroyed during the fighting; the ancient icon of Our Lady of Smolensk was lost. Nevertheless, it escaped total destruction. In late 1943, Göring had ordered Gotthard Heinrici to destroy Smolensk in accordance with the Nazi "scorched earth" policy. He refused and was punished for it. The city was finally liberated on September 25, 1943. The rare title of Hero City was bestowed on Smolensk after the war.

After the Germans captured the city in 1941, they found the intact archives of Smolensk Oblast Committee of the Communist Party, the so-called Smolensk Archive. The archive was moved to Germany, and a significant part of it eventually ended up in the United States, providing Western scholars and intelligence specialists with unique information on the local workings of the Soviet government during its first two decades. The archives were returned to Russia by the United States in 2002.[14][15]

On April 10, 2010, a Tu-154 military jet carrying Polish president Lech Kaczyński, his wife, and many notable political and military figures crashed in a wooded area near Smolensk while approaching the local military airport. All ninety-six passengers died immediately on impact. The purpose of the visit was to commemorate the 70th anniversary of the Katyn massacre, in which some 22,000 Polish POWs were murdered by the NKVD.

In 2013, archaeologists of the Russian Academy of Sciences discovered and unearthed in the ancient temples in Smolensk dated to middle to second half of the 12th century, built on the left bank at the time the city was the capital of Smolensk principality. From unique object preserved walls in some places low, in othersthe height of human growth.[16]

In September 2013, Smolensk widely celebrated the 1,150th anniversary with funds spent on different construction and renovation projects in the city.[17] In celebration Central Bank of Russia issued commemorative coins made of precious metals.[18]

Smolensk has several factories including the Smolensk Aviation Plant and several electronics and agricultural machinery factories.

There are two airports located in the outskirts of the city; Smolensk South (civilian) and Smolensk North (military); however, there are no regular flights scheduled to Smolensk South Airport.

Smolensk is home to the Smolensk State University (SMOLGU) and the Smolensk State Medical University (affiliated as university in 2015) (SSMU); together with colleges of further education and other educational institutes. smolensk is home for many foreign students including Indians,Japanese,Sri Lankans and few others. among them Indians are with highest count of population.smolensk is a great site for pursuing medical education.

Smolensk is twinned with:

Smolensk Strait between Livingston Island and Deception Island in the South Shetland Islands, Antarctica is named after the city.[22]