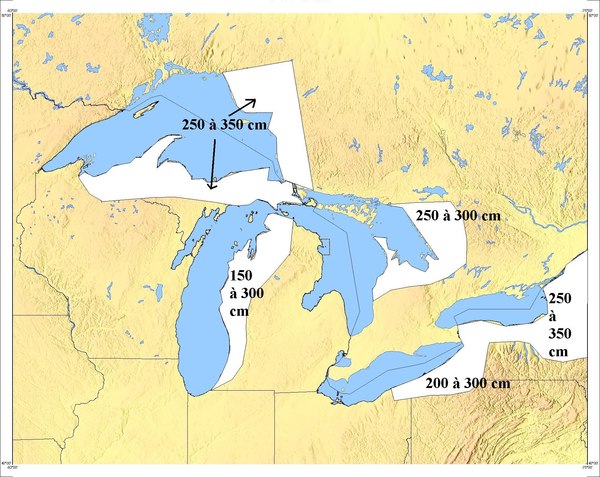 Snowbelt is a term describing a number of regions near the Great Lakes in North America where heavy snowfall in the form of lake-effect snow is particularly common.[1] Snowbelts are typically found downwind of the lakes, principally off the eastern and southern shores. Lake-effect snow occurs when cold air moves over warmer water, taking up moisture that later precipitates as snow when the air moves over land and cools.[1] The lakes produce snowsqualls and persistently cloudy skies throughout the winter months, as long as air temperatures are colder than water temperatures, or until a lake freezes over. 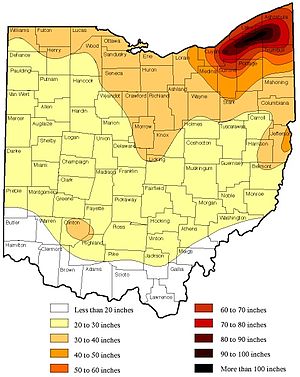 In the United States, snowbelts are located southeast of Lake Erie from Cleveland, Ohio to Buffalo, New York, and south of Lake Ontario stretching roughly from Rochester, New York to Utica, New York, and northward to Watertown, New York. Other snowbelts are located on the eastern shore of Lake Michigan from Gary, Indiana northward through Western Michigan and Northern Michigan to the Straits of Mackinac, and on the eastern and southern shores of Lake Superior from northwest Wisconsin through the northern half of the Upper Peninsula of Michigan.

Portions of the snowbelt are located in Ontario, Canada[2] which includes the eastern shore of Lake Superior from Sault Ste. Marie northward to Wawa, as well as the eastern and southern shores of Lake Huron and Georgian Bay from Parry Sound to London. During the winter season, north-westerly winds cause frequent road closures, with Highway 21 on the Lake Huron coast and Highway 26 south of Georgian Bay as far east as Barrie, Ontario being strongly affected. The Niagara Peninsula and the north-eastern shores of Lake Ontario are especially hard-hit by heavy snowfall when south-western winds are predominant.

Lake Erie is the second smallest of the five Great Lakes and the most shallow. It can completely freeze over during winter.[3] Once frozen, lake-effect snow over land to the east and south of Lake Erie is temporarily alleviated. This does not end the possibility of a damaging winter storm. The Great Lakes Blizzard of 1977 that struck metropolitan Buffalo was a direct result of powder snow blown by high winds off Lake Erie, which had frozen earlier than normal. There was, for the region, no significant snowfall during the duration of the blizzard.

Healthy skiing industries have been established in snowbelt regions located near major cities such as Buffalo and Toronto. The Erie/Ontario snowbelt, which extends to the northern slopes of the Allegheny Plateau, has lent the region its nickname: ski country. To the south of Georgian Bay, ski resorts are found on the Niagara Escarpment at Blue Mountain and on the Oro Moraine.

Snowbelt conditions also are found on the west side of the Japanese island of Hokkaido and the west side of Russia's Kamchatka Peninsula. Here, cold winds blowing outward from the Siberian winter high pressure system pick up moisture while crossing the Sea of Japan and the Sea of Okhotsk and release it as heavy snowfall over the respective land areas. Sweden's east coast can be affected by snowbelt conditions, particularly in the early winter when there is little ice on the Baltic Sea.