From Infogalactic: the planetary knowledge core
Jump to: navigation, search
This article is about ice crystals which form snow. For the bulbous spring flower, see Leucojum. For other uses, see Snowflake (disambiguation) and Snowflakes (disambiguation). 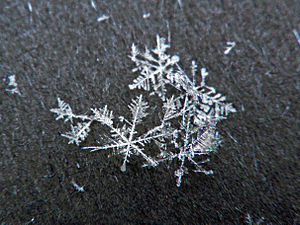 Several snowflakes photographed against a dark background, as visible to the naked eye.

A snowflake is either a single ice crystal or an aggregation of ice crystals which falls through the Earth's atmosphere.[1] They begin as snow crystals which develop when microscopic supercooled cloud droplets freeze. Snowflakes come in a variety of sizes and shapes. Complex shapes emerge as the flake moves through differing temperature and humidity regions, such that individual snowflakes are almost always unique in structure. Snowflakes encapsulated in rime form balls known as graupel. Snowflakes appear white in color despite being made of clear ice. This is due to diffuse reflection of the whole spectrum of light by the small crystal facets.[2]

In warmer clouds an aerosol particle or "ice nucleus" must be present in (or in contact with) the droplet to act as a nucleus. The particles that make ice nuclei are very rare compared to nuclei upon which liquid cloud droplets form; however, it is not understood what makes them efficient. Clays, desert dust and biological particles may be effective,[3] although to what extent is unclear. Artificial nuclei include particles of silver iodide and dry ice, and these are used to stimulate precipitation in cloud seeding.[4]

Once a droplet has frozen, it grows in the supersaturated environment, which is one where air is saturated with respect to ice when the temperature is below the freezing point. The droplet then grows by deposition of water molecules in the air (vapor) onto the ice crystal surface where they are collected. Because water droplets are so much more numerous than the ice crystals due to their sheer abundance, the crystals are able to grow to hundreds of micrometers or millimeters in size at the expense of the water droplets. This process is known as the Wegener–Bergeron–Findeisen process. The corresponding depletion of water vapor causes the droplets to evaporate, meaning that the ice crystals grow at the droplets' expense. These large crystals are an efficient source of precipitation, since they fall through the atmosphere due to their mass, and may collide and stick together in clusters, or aggregates. These aggregates are usually the type of ice particle that falls to the ground.[5] Guinness World Records list the world's largest (aggregate) snowflakes as those of January 1887 at Fort Keogh, Montana; allegedly one measured 15 inches (38 cm) wide. Although this report by a farmer is doubtful, aggregates of three or four inches width have been observed. Single crystals the size of a dime (17.91 mm in diameter) have been observed.[1]

The exact details of the sticking mechanism remain controversial. Possibilities include mechanical interlocking, sintering, electrostatic attraction as well as the existence of a "sticky" liquid-like layer on the crystal surface. The individual ice crystals often have hexagonal symmetry. Although the ice is clear, scattering of light by the crystal facets and hollows/imperfections mean that the crystals often appear white in color due to diffuse reflection of the whole spectrum of light by the small ice particles.[2] The shape of the snowflake is determined broadly by the temperature and humidity at which it is formed.[5] Rarely, at a temperature of around −2 °C (28 °F), snowflakes can form in threefold symmetry — triangular snowflakes.[6] The most common snow particles are visibly irregular, although near-perfect snowflakes may be more common in pictures because they are more visually appealing. It is unlikely that any two snowflakes are alike due to the estimated 1019 (10 quintillion) water molecules which make up a typical snowflake,[7] which grow at different rates and in different patterns depending on the changing temperature and humidity within the atmosphere that the snowflake falls through on its way to the ground.[8]

A non-aggregated snowflake often exhibits six-fold radial symmetry. The initial symmetry can occur[9] because the crystalline structure of ice is six-fold. The six "arms" of the snowflake, or dendrites, then grow independently, and each side of each arm grows independently. Most snowflakes are not completely symmetric. The micro-environment in which the snowflake grows changes dynamically as the snowflake falls through the cloud, and tiny changes in temperature and humidity affect the way in which water molecules attach to the snowflake. Since the micro-environment (and its changes) are very nearly identical around the snowflake, each arm can grow in nearly the same way. However, being in the same micro-environment does not guarantee that each arm grow the same; indeed, for some crystal forms it does not because the underlying crystal growth mechanism also affects how fast each surface region of a crystal grows.[10] Empirical studies suggest less than 0.1% of snowflakes exhibit the ideal six-fold symmetric shape.[11] 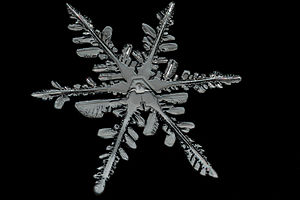 Almost all snowflakes are unique. This snowflake shows typical asymmetries that make snowflakes so diverse in form.

Snowflakes form in a wide variety of intricate shapes, leading to the popular expression that "no two are alike". Although possible, it is very unlikely.[7][12][13] Initial attempts to find identical snowflakes by photographing thousands of them with a microscope from 1885 onward by Wilson Alwyn Bentley found the wide variety of snowflakes we know about today. In 1988, Nancy Knight was documenting snowflakes for the National Center for Atmospheric Research and found two identical snowflakes of the hollow column type. It can have many sides from 5-(a number on beyond)[14]

Use as a symbol

The snowflake is often a traditional seasonal image or motif used around the Christmas period, especially in Europe, the United States and Canada. It represents the traditional White Christmas. During this period, it is quite popular to make paper snowflakes by folding a piece of paper several times, cutting out a pattern with scissors and then unfolding it.[15][16]

In heraldry, the snowflake is a stylized charge, often used to represent winter or winter sports.